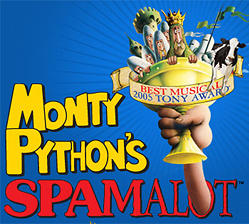 Winner of three 2005 Tony Awards including Best Musical, Monty Python’s SPAMALOT is the outrageous musical comedy lovingly ripped off from the film classic Monty Python and The Holy Grail.  Follow the tale of King Arthur and his Knights of the Round Table as they embark on their quest for the Holy Grail.

“Spamalot is a work which strikes a unique comic chord in its audiences,” comments director Dante J. Orfei. “For some, it conjures their memories of that distinctive style humor on which they transitioned from adolescence into the adult world. For others, it is boundless satire of the Arthurian legends while it relentlessly jabs at the world of the Broadway musical theatre. The brilliance of its writing creates a delightful evening of theatre irrespective of

buy cialis online without a prescription

what each audience member brings to the performance. All are destined to leave with a smile,” adds Orfei.

Eric Idle (Book, Lyrics and Music) has multi-hyphenated his way through life assiduously avoiding a proper job, from a writer and actor in the legendary Monty Python TV series and movies, to the creator and director of The Rutles, the pre-fab four, whose legend will last a lunchtime. He has appeared on stage in drag singing rude songs at Carnegie Hall and the Hollywood Bowl as well as performing in two highly successful tours, Eric Idle Exploits Monty Python (2000) and The Greedy Bastard Tour (2003), for which he journeyed 15,000 miles across North America in a bus. His Greedy Bastard Diary of that tour is published by Harper Collins. His play Pass the Butler ran for five months in London’s West End; he has written two novels, Hello Sailor and The Road to Mars, a children’s book, The Quite Remarkable Adventures of the Owl and the Pussycat, and a bedside companion, The Rutland Dirty Weekend Book.

John Du Prez (Music) a Trevelyan Scholar at Christ Church, Oxford, and Associate of the Royal College of Music, entered the film industry in 1978 composing additional music for Monty Python’s Life of Brian. This began a long association with Eric Idle, leading eventually to their current writing partnership. He has scored more than 20 feature films including The Meaning of Life, A Private Function, A Fish Called Wanda, Once Bitten, UHF and Teenage Mutant Ninja Turtles I, II and III. Other Python projects include the Contractual Obligation Album, Monty Python at the Hollywood Bowl and The Fairly Incomplete & Rather Badly Illustrated Monty Python Song Book. He was musical director for Eric Idle’s two North American stage tours, Eric Idle Exploits Monty Python (2000) and The Greedy Bastard Tour (2003). Spamalot is his Broadway debut.

Dante J. Orfei (Director) has been the Artistic Director at the Jedlicka Performing Arts Center for over 25 years. He is a graduate of the University of Notre Dame and has produced and directed a travel documentary titled European Sojourn, which aired on PBS. Dante also directed the U.S. Premiere of the musical Metropolis and worked closely with the show’s creator, Academy and Grammy Award-winner Joseph Brooks on the development of the show. Dante directed the national regional theatre premiere of Brooks’ most recent Broadway show, In My Life. He has studied with Tony Award-winners Harold Prince and Jules Fisher. He directed the Midwest Regional Premiere of the Queen rock musical, We Will Rock You, and has also directed the World Premiere of Nefertiti – The Musical, as well as premiere Chicago productions of Little Women, Andrew Lloyd Webber’s Aspects of Love, Blood Brothers, Jekyll and Hyde, The Baker’s Wife, and numerous plays by Olivier Award-winning playwright Ray Cooney, including the U.S. Premiere of Cooney’s It Runs in the Family. Dante has directed well over 175 stage productions on the professional, dinner theatre and academic levels.

John Warren (Music Director) has previously directed It’s A Grand Night for Singing, Sunset Boulevard, and Legally Blonde at JPAC. No stranger to the JPAC stage, John has performed in both Phantom of the Opera and Man of La Mancha. He is the head of Music Studies at Morton College.

Christopher Pazdernik (Choreographer) most recently choreographed the Chicago premiere of Bloody Bloody Andrew Jackson for Bailiwick Chicago.  Other Chicago directing or choreography credits include Show Us Your Love & F***ing Men (Bailiwick Chicago), Bombs Away! (Bailiwick Repertory); Candide, Miracle on 34th Street and A Catered Affair (Porchlight Music Theater), Time After Time: The Songs of Jule Styne (Theo Ubique), The Full Monty (Village Players), and a series of musical theater revues at Davenport’s Piano Bar & Cabaret.  He has also worked as a director of new musicals in development and as a guest artist at Elmhurst College, his alma mater.  He is a proud to be a Collective Member with Bailwick Chicago, an Artistic Associate with Porchlight Music Theater and the Annual Fund Coordinator at Chicago Shakespeare Theater.