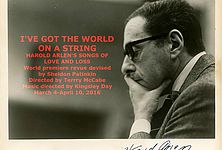 I’ve Got the World on a String:  Harold Arlen’s Songs of Love and Loss, devised by Sheldon Patinkin and directed by Terry McCabe with music direction by Kingsley Day, and choreographed by Brigitte Dittmars is a revue of twenty-three Arlen songs set late at night in a Manhattan bar during the mid-1940s. The production begins previews on Friday, March 4, 2016, and opens for the press on Tuesday, March 8.

Harold Arlen composed dozens of standards during a career that spanned from the 1920s to the 1970s.  He wrote for Cotton Club revues, Broadway shows, and Hollywood movies.  He collaborated with most of the greatest lyricists of his day, including Johnny Mercer, E. Y. Harburg, and Ira Gershwin.  He is best remembered for having written the score to The Wizard of Oz, and in 2007 his song “Over the Rainbow” was voted the number one song of the twentieth century by the Recording Industry Association of America.

Sheldon Patinkin was a good friend of City Lit and a major presence in Chicago theatre for over 60 years.  He directed a number of City Lit productions, consulted on even more, and was planning on directing this revue.  At McCabe’s request, he had whittled down a list of over 500 Arlen songs and devised a theatrical premise for presenting twenty-three of them in a character-based revue.  He completed that work last August, but had not typed up a finished libretto when he died in September.  City Lit is grateful to his niece Karen Patinkin, who searched for and gathered all of Patinkin’s lists and notes and outlines related to the revue.  McCabe and Day sifted through these materials, which made Patinkin’s final intentions for the revue clear.  “We are more than pleased,” McCabe said, “to be able to put Sheldon’s final show onstage for him.”

Kingsley Day is a thrice-Jeff-nominated music director whose credits include Theatre Wit’s Two for the Show, the Apollo Theater’s Hello Muddah, Hello Fadduh!, and the Best-Revue-Jeff-winning Irving Berlin revue Puttin’ on the Ritz, conceived and directed by Patinkin for the old National Jewish Theater and remounted for a commercial run at Drury Lane Evergreen Park. Day collaborated with Patinkin on many projects over three decades, including revues of songs by Kurt Weill and Richard Rodgers.

I’ve Got the World on a String: Harold Arlen’s Songs of Love and Loss begins previews on Friday, March 4th, 2016, and opens for the press on Tuesday, March 8th at 7:00 pm, then runs through Sunday, April 10. The production will play a total of 21 performances:  Tuesdays, Fridays and Saturdays at 7:30 pm, and Sundays at 3:00 pm. Ticket prices are $22.00 for previews and $29.00 thereafter.   Discounts are available for seniors, students, members of the military, and groups of ten or more. Tickets can be reserved by going to www.citylit.org or by calling (773) 293-3682.

City Lit specializes in literate theatre, including stage adaptations of literary material. It is located in the historic Edgewater Presbyterian Church building at 1020 West Bryn Mawr Avenue, one block west of Sheridan Road and a block and a half east of the Bryn Mawr Red Line L stop.

The 36 Broadway bus, the 84 Peterson bus, the 147 Lake Shore Express bus, and the 147 and 151 Sheridan buses all stop near City Lit.  Valet parking is available for theatre customers at Francesca’s Bryn Mawr restaurant across the street from City Lit, and, with validation from the Edgewater Beach Café, in the Edgewater Beach Apartments’ underground parking lot one block east of the theatre.  Free parking is available for theatre customers who dine at That Little Mexican Café one block west of the theatre.  Street parking on Bryn Mawr Avenue has three-hour pay boxes, which are free on Sundays.