Lead dancer ANTHONY RUSSO discusses his seventeen year history with Dein Perry’s TAP DOGS and how the experience inspired him to start a non-for-profit traveling tap festival for young adults which has given over $75,000 in scholarships to students around the US and Canada. Dein Perry’s TAP DOGS will play Broadway In Chicago’s James M. Nederlander Theatre April 16-21.  Visit BroadwayInChicago.com for tickets and more information.

ANTHONY RUSSO (Foreman) At 15 years old, Anthony Russo went to an 18+ Equity audition for Anything Goes at The MUNY in St Louis, MO and booked the gig. That experience set the tone for the years to follow. He once crashed an agent-only audition for Cirque Du Soleil with a smiley face drawn on paper as a headshot and booked the gig. It was this sheer will to perform that also landed him his first touring contract in 2001. Russo left high school just before the start of his senior year and joined the 6th national tour of Tap Dogs. In addition to his performance credits, Anthony produces tap dance education programs throughout North America under his touring company, @ TapTheMap, and an annual event in St Louis, MO, @ ShowMeTapFest. In 2013, Russo was awarded Outstanding Young Missourian by The Missouri Junior Chamber of Commerce for his contributions to dance education nationwide. ‘Tap The Map’ received acknowledgment from The Missouri House Of Representatives for facilitating over $75,000 in scholarships to students around the US and Canada. 17 years later, he is proud to be a part of the cast of Tap Dogs and to perform in the show that solidified his decision to tap dance professionally in the first place. 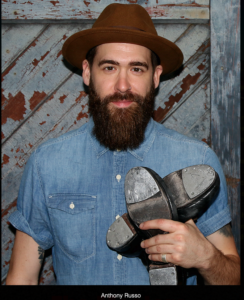 Broadway In Chicago is delighted to announce the return of Australia’s most successful theatrical export, Dein Perry’s TAP DOGS that will play Broadway In Chicago’s James M. Nederlander Theatre for a limited one-week engagement April 16 through April 21, 2019.

This is not just tap. Experience high voltage, rugged, raw talent in the tap dance phenomenon which has taken the world by storm.

Dein Perry’s TAP DOGS returns to the stage with its trademark blend of live music and tap dance as you’ve never seen before. The New York Observer called it “positively electrifying.”

Part theatre, part dance, part rock concert and part construction site, the show is crammed with high-energy dance, theatrical performance, and music performed by the cast and live musicians in this unstoppable spectacular. Whether in water, upside-down or jumping through scaffolding, the Tap Dogs have been performing to the beat of their own drum for over 20 years.

Winners of over 15 international awards including an Olivier Award (UK), an Obie Award (New York) and a Pegasus Award (Spoleto Festival in Italy), the global smash hit has appeared in over 330 cities on six continents and has been seen live by over 12 million people. A worldwide television audience of over 3.4 billion saw 1,000 Tap Dogs performing in the Opening Ceremony of the Sydney Olympics.

TICKET INFORMATION
Individual tickets for Dein Perry’s TAP DOGS range from $15-$65 with a select number of premium seats available. Tickets are available for groups of 10 or more by calling Broadway In Chicago Group Sales at (312) 977-1710 or emailing [email protected].  For more information, visit www.BroadwayInChicago.com.

ABOUT BROADWAY IN CHICAGO
Broadway In Chicago was created in July 2000 and over the past 19 years has grown to be one of the largest commercial touring homes in the country.  A Nederlander Presentation, Broadway In Chicago lights up the Chicago Theater District entertaining more than 1.7 million people annually in five theatres. Broadway In Chicago presents a full range of entertainment, including musicals and plays, on the stages of five of the finest theatres in Chicago’s Loop including the Cadillac Palace Theatre, CIBC Theatre, James M. Nederlander Theatre, and just off the Magnificent Mile, the Broadway Playhouse at Water Tower Place and presenting Broadway shows at The Auditorium Theatre. For more information, visit www.BroadwayInChicago.com. 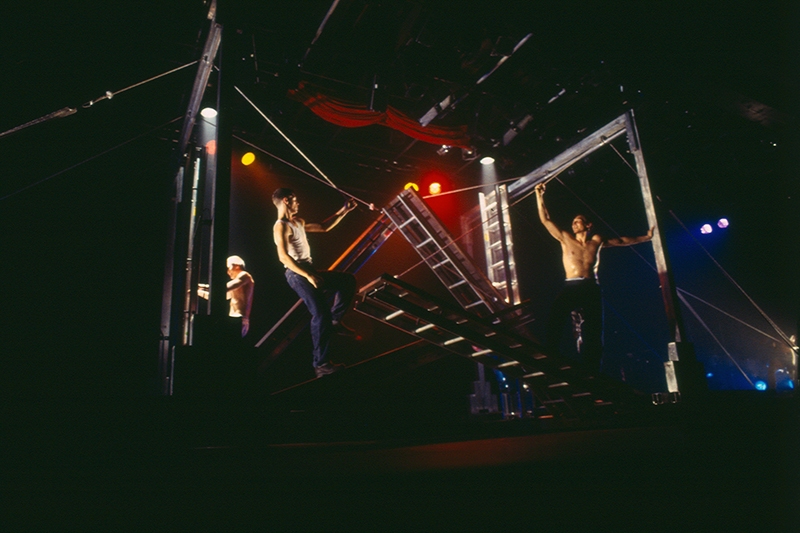 Broadway Entertainment Group is the world’s first ever theatrical distribution company to consolidate an international circuit and bring top quality entertainment into the markets of the Middle East, Russia, South and Central Asia and Latin America. Chief Executive Officer Liz Koops has produced shows internationally for over 20 years, and toured productions in 37 countries.

JAMES DOUBTFIRE (Associate Director) James has been touring the world with Dein Perry’s Tap Dogs for the past 20 years as a performer and Assistant Director. He was also Assistant Director of The London West End production of Tap Dogs, staring Adam Garcia. In 2000, James worked on the opening ceremony of The Sydney 2000 Olympics and also with his Tap Dogs colleagues had the honor of being part of the famous BBC1 identities. James has performed in many television shows including “Big Brother,” “The Royal Variety Performance,” “The Clothes Show,” “Barrymore,” “The Generation Game,” “The National Lottery,” “This Morning,” “Blue Peter” and “GMTV.” Advertisements include Amina mobile phones, T- Mobile, Lego, Le Crunch Bunch, Boots The Chemist and Colgate Toothpaste. Modeling assignments include Dolce and Gabbana, Paul Smith and various magazines. James started dancing at the age of four and at the age of twelve he created the role of Laughing Boy in the original musical, Bugsy Malone at Her Majesty’s Theatre in London. James then continued his career in the musicals/shows, such as 42nd Street (Original UK Tour), Me and My Girl (Original UK Tour), An Evening with Sondheim (Manchester), both English and Australian tours of Hot Shoe Shuffle (playing the role of Tip), “The Anton and Erin Show” (Jersey) and also choreographed two Professional Pantomimes in Harrogate, Directed by Phil Lowe. Since 2009 James has become Artistic Director and Choreographer for Tap Attack (England tap team). During this time James has Choreographed 14 IDO World Tap titles. James is also Choreographer & Director of Extreme Tap, an all-male tap company who have performed in corporates at 02 Arena London, Qatar (Tennis Open), Italia (Fashion Show), Dubai (TV Shows), McDonalds (Awards Ceremony), Mercedes Benz (Awards Ceremony), Sadlers Wells Theatre London and as guests at the Royal Albert Hall Dance Proms. In 2016 James was honored to become the original Tap Choreographer for Disney’s new show Mickey & The Magician in Disneyland Paris.