AMERICAN GIRL LIVE lyricist & book writer SANDY RUSTIN discusses the process of bringing these iconic characters to life and the importance of keeping the historical accuracy of each American Girl. AMERICAN GIRL LIVE will play Broadway In Chicago’s Broadway Playhouse at Water Tower Place (175 E. Chestnut) for a limited two-week engagement April 30 through May 12, 2019 For more information, visit BroadwayInChicago.com.

Sandy Rustin (book & lyrics) is currently writing the stage version of Paramount Picture’s cult-hit film, CLUE (Nat’l Tour 2019). She is the writer of the hit Off-Broadway musical, Rated P… For Parenthood (optioned for TV by ABC Studios). She wrote and starred in Overbooked for Nickelodeon (Nick Mom). Her comedy, The Cottage, was presented at Manhattan Theatre Club with Jason Alexander (Seinfeld) directing, and is in development for a NY production. Her other plays include: Struck, Houston, and Elijah.

Follow SandyRustin_ on Instagram for a behind the scenes look on how “American Girls” make theatre! www.sandyrustin.com

In AMERICAN GIRL LIVE, a new, original, 90-minute musical that celebrates the power of girls and strength of friendship, audiences join five spunky campers and their fearless counselor at Camp American Girl, an overnight camp in the North Woods. Overcoming fears and obstacles along the way to having the summer of their lives, these brave campers rely on wisdom and advice delivered by Rebecca, Maryellen, Julie, Nanea, Luciana, and Melody – the beloved American Girl dolls they’ve brought along to camp – who inspire audiences in surprising and delightful-musical numbers, each reflecting their historical eras. Empowered by the stories and conviction of their American Girls, the campers learn that they can overcome anything and achieve their dreams, so long as they stay true to themselves and support one another! 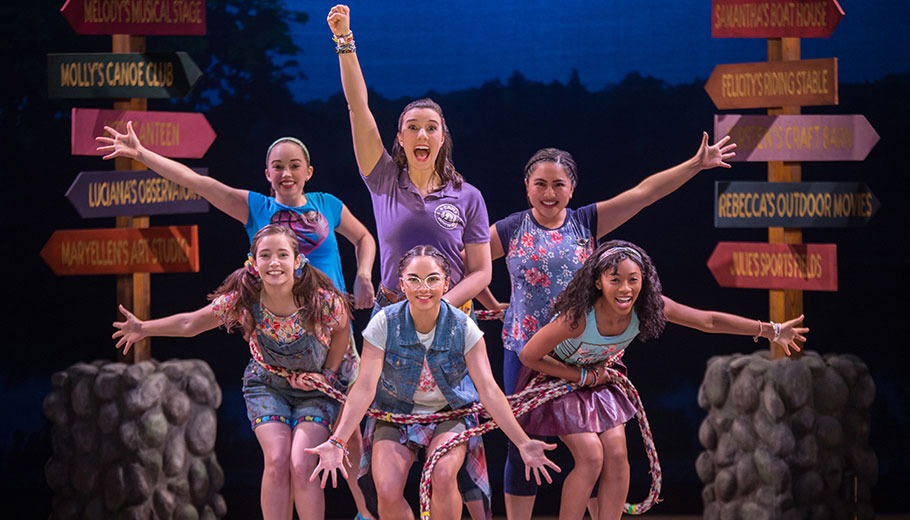 TICKET INFORMATION
Individual tickets for AMERICAN GIRL LIVE are now on sale to the public and range in price from $39-$79 with a select number of premium tickets available. AMERICAN GIRL LIVE will also offer a VIP Meet and Greet package, which will include a post-show photo opportunity with characters from the show. Tickets are available now for groups of 10 or more by calling Broadway In Chicago Group Sales at (312) 977-1710 or emailing [email protected]. For more information, visit www.BroadwayInChicago.com.

ABOUT BROADWAY IN CHICAGO
Broadway In Chicago was created in July 2000 and over the past 19 years has grown to be one of the largest commercial touring homes in the country.  A Nederlander Presentation, Broadway In Chicago lights up the Chicago Theater District entertaining more than 1.7 million people annually in five theatres. Broadway In Chicago presents a full range of entertainment, including musicals and plays, on the stages of five of the finest theatres in Chicago’s Loop including the Cadillac Palace Theatre, CIBC Theatre, James M. Nederlander Theatre, and just off the Magnificent Mile, the Broadway Playhouse at Water Tower Place and presenting Broadway shows at the Auditorium Theatre.

American Girl is a premium brand for girls and a wholly-owned subsidiary of Mattel, Inc. , a creations company that inspires the wonder of childhood. Headquartered in Middleton, WI, American Girl offers an inspiring world of dolls, content, and experiences that nourish a girl’s spirit and help develop her strength of character. Best-selling lines include Truly Me™, Girl of the Year™, Bitty Baby™, WellieWishers™, and American Girl’s classic historical characters. The company sells products through its award-winning catalogue, on americangirl.com, in its proprietary U.S. experiential retail stores, as well as at specialty retailers nationwide. By inspiring girls to be their best, American Girl has earned the loyalty of millions and the praise and trust of parents and educators.

As the leading producer and promoter of branded live entertainment in the United States, Mills Entertainment, a division of Creative Artists Agency (CAA), collaborates with top talent and property holders to create unforgettable live experiences.  With full global distribution and partnerships worldwide, our specialty is taking shows from concept to stage, serving as the complete solution in realizing the vision.  Current projects include Ripley’s Believe It or Not! Carnival of Curi-oddities, Daniel Tiger’s Neighborhood Live!, Theresa Caputo Live! The Experience, Bring It! Live and The Elf on the Shelf – A Christmas Musical.  www.millsentertainment.com.