HGTV’s newest renovation stud, Francis Toumbakaris is as comfortable in a pair of tights and slippers as he is in boots and overalls.  Born and raised in Athens, Francis trained in classical ballet since he was twelve and then high kicked his way onto the national tours of Fosse and Dirty Rotten Scoundrels and then on Broadway in the revival of Fiddler on the Roof starring Alfred Molina and later Harvey Fierstein and Rosie O’Donnell. Other theatrical career highlights include the award winning Susan Stroman dance musical Contact, and Candid at The New York City Opera.

Francis opens up about his father’s opposition to going into ballet, how an ad in Craigslist changed his career path, the current conditions of his former country, how he keeps his ripped body in shape!

MJR: (Michael J. Roberts) Hi Francis. Congratulations of all of your success.   So tell us how a nice boy from Athens, Greece went from ballet dancer to HGTV star.

FT: (Francis Toumbakaris) Well Michael, just like your great ancestors I came to America for a better future.  America is country were everybody can dream.  I am a firm believer that America is the only place that with a dream and a lot of hard work, things will happen for you!

MJR: When did you start dancing and at what point did you know you were good enough to make a career out of it?

FT: I didn’t know I was a good dancer so I went to school to find that out.  My mother ran a ballet school and was a ballerina herself.   My mother had me when she was very young and then had to stop dancing and ran a ballet school.   My parents got divorced when I was very young so I was raised by my mother.  Instead of leaving me with other relatives or neighbors she took me to work with her.  I basically grew up in a ballet studio.  Looking back I guess it was in my blood.

MJR: How did you father view you wanting to be a dancer?

FT: Well, like most Fathers around the world, my dad had great objections with me doing ballet.  Dad was afraid of the stigma that if a young boy dances ballet he is going to turn into a woman.  But around the age of 12 my mom got so much pressure from me that she decided to let me take a ballet class.  I left Greece for Switzerland when I was 15 ½  and studied ballet with Maurice Bejart and graduated from the Hamburg Ballet School.

MJR: Is that were you became interested in acting and musicals?

FT: Yes, what happened was that in school, Bejart believed that a good dancer also needed to be a good speaker and a good singer, so part of are curriculum were acting and voice classes.  I also realized that as a performer, rather than just a dancer, there are more opportunities to tell a story to an audience.  I was then introduced to musical theatre and straight acting.   I then knew if ballet didn’t work out for me I could do so many other things on stage and screen.

MJR: How did you end up in New York?

FT: Well Broadway was always where I wanted to be and is the gold standard for any performer.  When I was twenty years old, my Aunt took me to see Liza Minelli in concert and that was it!!

FT:  Laughing. Yes, I remember singing New York, New York to myself in my living room.   I don’t know if you read The Altruist, but I do believe that if you put something out into the universe that you aspire to, it will come back to you.  So when I arrived in New York City, I immediately began auditioning and was cast in Fiddler on the Roof with Alfred Molina and Andrea Martin (followed by Harvey Fierstein and Rosie O’Donnell).  I then went out on tour with shows such as Fosse and Dirty Rotten Scoundrels with Norbert Leo Butz who was amazing to learn from and work with.

MJR: Then how did you get into remodeling?

FT: I needed money.  When I got back from my last tour of Dirty Rotten Scoundrels, I was on unemployment.  I didn’t want to wait tables and I lived alone ever since I was fifteen.  So I put an ad on Craigslist to do basic handyman work.   I turned a survival job into my own successful interior design firm that is now six years old now called Greek and Handy. 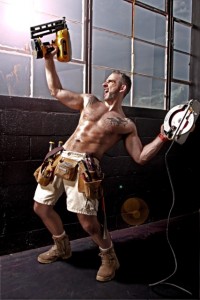 MJR:   Then your two passions of performance and design finally came together for HGTV!

FT: Yes, when I got cable television I became hooked on HGTV.  When I first saw Design Star I said to myself “I have to do this; I AM A DESGIN STAR!!”  I thought HGTV was a perfect vehicle for someone like me who has both an entertainment and construction background.

Because of my knowledge of construction, HGTV thought it was more appropriate to cast them in their brand new show Brother vs Brother rather than Design Star.  Brother vs Brother features the Property Brothers, Jonathan and Drew Scott, who are both wonderful guys.  Brother vs Brother will teach the viewers that by smart design choices, it can greatly affect the value of their property. This will have more substance than most reality design shows.

MJR: You parents must be very proud of you.  Do you ever get back to Greece?

FT: My parents are very proud and thank you for asking about them.  Yes, I do go back to Greece sometimes but now it is a very, very sad place because of the economy.   It is really hard for me because Athens used to be such an alive and happy place, but now people are struggling and suffering.  My mother does come to visit me sometimes, but she hasn’t been in four years, but I do try to get back at least once a year.

MJR: Now the most important question…How do you keep that great body of yours in shape?!

FT: It is called the New York Sports Club!  First, I live in New York City and to be quite honest; amongst the gay world we are a little bit like a meat market.  Also, with the television show, I know Americans like to watch fit people so I just have to look the part.   A lot of times it is hard to find the time, especially when I am on a construction site for ten hours a day, but you just have to do it.   Thank you for noticing, Michael!