Interrobang Theatre Project is pleased to open its 2016-17 Season, exploring “Flesh and Blood,” with the Midwest premiere drama STILL by Jen Silverman, directed by Co-Artistic Director Georgette Verdin*, playing September 29 – October 30, 2016 at The Athenaeum Theatre (Studio 2), 2936 N. Southport Ave. in Chicago. Winner of the 2013 Yale Drama Series Award, STILL is a profoundly oblique journey through womanhood, grief and the triumph of saying goodbye, Tickets are currently available at www.interrobangtheatre.org.

Constantinople has been dead for two days, but that’s the least of his worries. He has to find his mother before it’s too late, and his already stiff body shuts down for good. As he searches an unfamiliar world filled with women he doesn’t understand, his mother, Morgan must learn to grieve the son she never knew 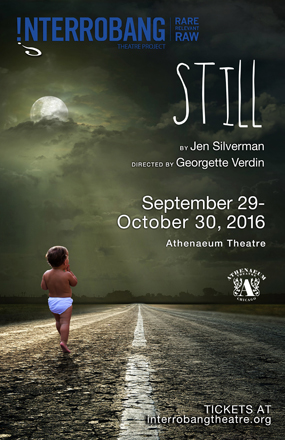 Comments Director Georgette Verdin, “Still, at its core, is about the relentless bond between mother and child. Morgan and Constantinople long for each other; for the little they’ve shared and for everything they never will. In this unexpected dark comedy, Silverman blurs the lines between life and death, bringing voice to a topic rarely explored and proving that the relationship between ‘Flesh and Blood’ isn’t just for the living.”

Georgette Verdin (Director) Along with working for Interrobang and being a freelance director, Georgette is also the founding theatre teacher at Polaris Charter Academy, an Expeditionary Learning School in West Humboldt Park. In addition to assistant directing Season five’s Really Really and Owners; she also directed ITP’s first and second shows of last season: Katrina: Mother-in-Law of ‘Em All and Jeff Recommended Recent Tragic Events. Most recently, she directed the ten-minute play Faking Glory, as part of Queeroism, a short play festival honoring queer pride. Georgette will also be directing as part of 20% Theatre Company’s Snapshots festival in August. She holds a Masters in Directing from Roosevelt University and a B.A. in Theatre Performance from McNeese State University in Lake Charles, LA.

Now in its seventh season, Interrobang Theatre Project, under the artistic leadership of Georgette Verdin and James Yost, has been hailed by the Chicago Tribune as a “company to watch” and by Time Out Chicago as “one of Chicago’s most promising young theatre companies.” Productions have included the world premiere of Ibsen Is Dead (Jeff Recommended) and the Jeff Award Recommended The Pitchfork Disney, Terminus, Orange Flower Water, Really Really, Recent Tragic Events and The North Pool. The critically-acclaimed Hot ‘N’ Throbbing earned a 5-star review from Time Out Chicago which called the production a “scintillating revival” and Newcity Stage exclaimed, “Interrobang Theatre Project, guns ablaze, dives headfirst into the play’s challenging themes, and offers a rare production in which every element onstage is as robust and capable as every other.”

An interrobang is the combination of a question mark and an exclamation point, joining the Latin for “question” (interro) with a proofreading term for “exclamation” (bang). Through the plays we produce, Interrobang Theatre Project aims to pose worthwhile and exciting questions which challenge our understanding and assumptions of who we are and the world in which we live.