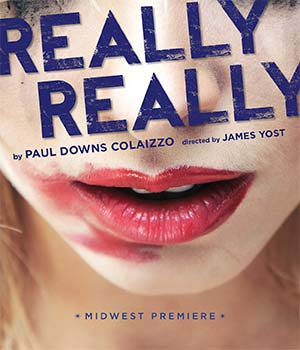 Interrobang Theatre Project is pleased to continue its 2014-15 season with the Midwest premiere of REALLY REALLY by contemporary American playwright Paul Downs Calaizzo, directed by Co-Artistic Director James Yost*, playing February 13 – March 15, 2015 at the Athenaeum Theatre, 2936 N. Southport Ave. in Chicago. Tickets are available through the Athenaeum Theatre Box Office at www.athenaeumtheatre.org or by calling (773) 935-6875.

In the hazy aftermath of a wild campus party, dawn breaks on what appears to be just another day in the undergrad carnival that revolves around a circle of friends. But when morning-after gossip about privileged Davis and ambitious Leigh turns ugly, the veneer of loyalty and friendship is peeled back to reveal a vicious jungle of sexual politics, raw ambition and class warfare where only the strong could possibly survive.

Tickets: Previews: $10. Regular run: $15 (Thursdays, Saturday/Sunday matinees) and $20 (Friday and Saturdays evenings). $10 students, seniors and industry discounts (with ID). Tickets are available at www.athenaeumtheatre.org, in person at The Athenaeum Theatre Box office or by calling (773) 935-6875. Please note: The Athenaeum Theatre’s $2 restoration fee is added to the ticket price.

Paul Downs Calaizzo’s first play Really Really debuted at the Signature Theatre in 2012, then went on to a sold-out twice extended run Off-Broadway at MCC Theater in 2013. The play garnered Calaizzo a 2013 Helen Hayes New Playwright Award. His most recent play, Pride in the Falls, premiered in 2013 at the Signature Theatre starring Christine Lahti.  Entertainment Weekly listed Paul as one of the Next Wave of New Hollywood writers to watch and his career was profiled in a 2013 New York Times feature. Paul recently developed a one-hour pilot for ABC and is currently writing on staff for Ryan Murphy’s new HBO drama, Open.

James Yost has staged more than 50 plays and has won several awards for his productions, as well as receiving Theatre Person of the Year in 2001 in Charlotte, NC. Selected plays include: Mr. Marmalade, Psycho Beach Party and Debbie Does Dallas: The Musical. Other credits include: The Graduate, The Play About the Baby, A Midsummer Night’s Dream, Drift, Ugly Art, bash – the latter-day plays, Squirrels, The Wizard of Oz, Lend Me a Tenor, True West, The Pitchfork Disney and Noises Off. Yost teaches acting, directing, production design and film at the high school and collegiate level. He is published in Teaching Theatre Journal, a publication of Dramatics Magazine.

Founded in 2010, Interrobang Theatre Project (Jeffry Stanton and James Yost, Co-Artistic Directors) produces visceral and timely plays, new American works and rare texts that are not readily seen on other Chicago stages. Interrobang is not recommended for audiences who prefer theatre to be benign or familiar.

Now in its 5th season, Interrobang Theatre Project, under the artistic leadership of founder Jeffry Stanton and James Yost, has been hailed by the Chicago Tribune as a “company to watch” and by Time Out Chicago as “one of Chicago’s most promising young theatre companies.”

Productions have included the world premiere of Ibsen is Dead by Calamity West; the Midwest premiere of The Argument by Gregory Moss; the Jeff Award Recommended The Pitchfork Disney, Terminus and Orange Flower Water; Speaking in Tongues, Here Lies Henry, and the critically-acclaimed Hot ‘N’ Throbbing which Time Out Chicago’s 5-star review called a “scintillating revival” and Newcity Stage exclaimed, “Interrobang Theatre Project, guns ablaze, dives headfirst into the play’s challenging themes, and offers a rare production in which every element onstage is as robust and capable as every other.”

An interrobang is the combination of a question mark and an exclamation point, joining the Latin for “question” (interro) with a proofreading term for “exclamation” (bang). Punctuation expresses an attitude, an idea, an attempt to make things clearer. Through the plays we produce, Interrobang Theatre Project poses muscular questions. Navigating through the dark together with our audience we attempt to arrive at new understandings and fresh perspectives of who we are and the world in which we live.