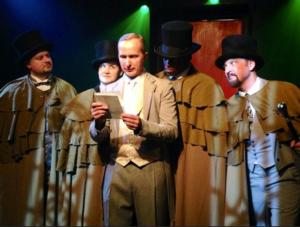 Idle Muse will open its ninth season with Dr Jekyll and Mr Hyde, adapted by Jeffrey Hatcher and directed by IMTC ensemble member Nathan Pease. This adaptation is a whip- smart and shocking version of a classic tale of lust, love, horror, and the depravity that lurks within us all.

Performance times are Thursdays, Fridays, and Saturdays at 8PM and Sunday at 3PM. Ticket prices are $20 for adults and $15 for students/seniors. Tickets for previews are $10. Every Thursday is Industry Night with $10 tickets for industry members with headshot/resume.

The cast for Dr Jekyll and Mr Hyde includes:

The production team for Dr Jekyll and Mr Hyde includes:

Now in its 9th season, Idle Muse Theatre Company was formed to provide theatre artists who share a common commitment to their craft with an opportunity to work and grow in a collaborative environment. Idle Muse Theatre Company recognizes that, as a people, we spend our lifetimes exploring what it means to define our identities in a world that is constantly struggling to do the same. As we do so, that world becomes an expression of our own internal struggles, writ large. We produce plays which explore and examine the circular relationship between the individual and the world; plays about individuals who are called upon to define themselves in relation to a larger political or social context.