I Love Lucy Live on Stage – A Nostalgic Look Back 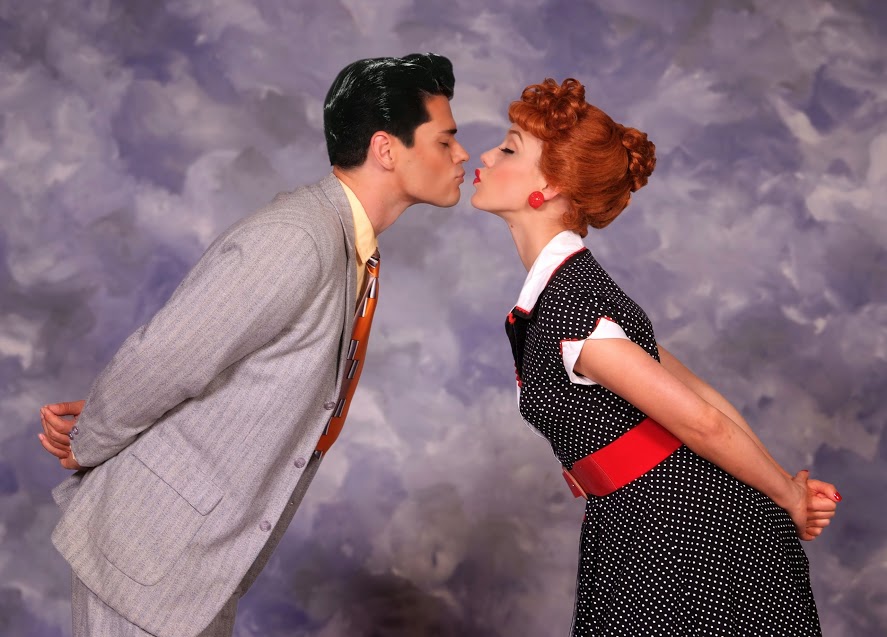 Recommended: Theatre In Chicago Review Round up

Broadway in Chicago’s latest offering, I Love Lucy Live Onstage at the Bank of America Theatre will appeal to most of the fans of the immortal groundbreaking television show I Love Lucy. Other diehards may be disappointed at some of the casting choices, flimsy book and over the top mugging of Lucy.

When producing a stage show with such legendary and indelible actors like Lucille Ball, Vivian Vance, Bill Frawley and Desi Arnaz and trying to find actors that can emulate and capture their unique chemistry and magic it is an elusive and, l in my opinion, impossible task. After all it is the chemistry of these 4 that made the comedy fire.

This production of I Love Lucy Live Onstage, now making its second national tour, mixes the live filming of 2 actual episodes of the show, “The Benefit” and “Lucy Has Her Eyes Examined” (not the most memorable or even funniest episodes) with commercials that take place between them (many too long and drawn out). I think the show would fare better with focusing on the taping of one classic and iconic episode from the series and give us a peak behind the curtain regarding the actual tensions of the 4 actors that is legendary. It would give an otherwise flimsy show trying to fill 90 minutes, a strong backbone and make it stage worthy. I have no question that the creators of this really do love Lucy but some shows may be better left as ideas. With all of the time, effort and money that goes in to producing a stage show the creators are being set up for a big fall, big disappointments and poor reviews.

I could not help get the overall feeling with the small cast and shoddy looking set that this is a production done on the cheap (and this is a Union Equity production). Producing a show with the main goal of making a lot of money is not a bad thing at all. In fact theatre should make money. But it has been my experience that when a show is done on the cheap it can easily backfire and leave an audience with a feeling of want, especially when expectations are high.

The cast makes or breaks a show. In the title role of Lucy Ricardo Thea Brooks has the daunting task of bringing this iconic character to life, which she handles well in technical aspects (although too studied). However with the comedy she comes across cartoonish and mugging for laughs, something which Lucille Ball (trained as a clown by legendary silent film star Buster Keaton) carried off naturally. Brooks’ accent was odd at times but her vocal quality came close to the real thing. Where she excelled best was in some of the facial expressions of Lucille Ball when not mugging. She does look quite a bit like Lucy and I wanted her to just relax and act with the same naturalness of Euriamis Losada’s Ricky Ricardo.

Lori Hammel’s Ethel Mertz was a disappointment. Although she gives it her best shot Hammel did not favor her in any way, physically or vocally and came across too young and attractive.

The men in I Love Lucy Live Onstage fare much better. Kevin Remington looks enough like Fred Mertz to pass and has captured his vocal quality and vaudevillian flair quite well.

However the one performance that nails his character and drives much of the production is Cuban actor Euriamas Losada as Ricky Ricardo (even though he is a bit too young and thin for the real Desi Arnaz in 1952). He channels Desi Arnaz in a manner that is completely natural, believable and immensely charming without slipping into caricature. He is also a fine singer and belts out Ricardo’s signature song “Babalu” which is a highpoint of the 90- minute show. The show should be renamed I Love Ricky as he is the force that carries it and worth the price of admission. He lights up the stage.

Other standouts in the ensemble are Denise Moses who plays a multitude of characters (as do all of the hard working, small, and very talented ensemble) and Mark Christopher Tracy who, as our host at the Desilu Studios, establishes much of the feel of 1952 and has a natural talent for seeming to ad lib; he is the perfect host. Richard Strimer’s King Kat Walsh is also delightful as the dance teacher who teaches Lucy to Jitterbug.

Composer, Arranger, Orchestrator and Conductor Peitor Angell’s musical arrangements are well done and his orchestra has a great and period authentic sound. I could not tell if some of the music when the band is not onstage was recorded or live.

Shon LeBlanc’s costumes are extremely well done and, combined with Diane Martinous’ period perfect wig designs, gives the show substance and authenticity. I wish that Aaron Henderson’s set design matched the quality of the costumes and wigs but it looked cheap (especially the Ricardo’s apartment) and too much like a set instead of an actual structure as in the original. The design is spot on but the execution is lacking.

If director Rick Sparks (also co-adaptor) would have approached this show with a more naturalistic and less cartoonish style it would corrected many of the issues I have with it and provided a show with more meat and less whipped cream. For those who want a nostalgic trip back to the 1950s and have a fun, light and entertaining evening at the theatre, I Love Lucy Live Onstage is worth a trip out. However if you go to scrutinize how effectively they capture the magic, effortless humor of the original series you may leave feeling disappointed.

I Love Lucy Live Onstage runs only through December 14th so you do not have a lot of time to catch it.