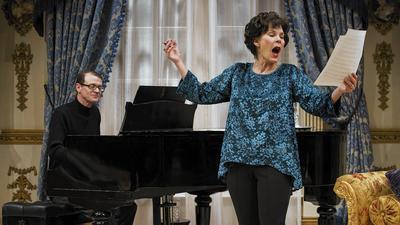 Even after all these years involved in the theatre industry, to still be as moved as myself and my fellow colleague were viewing the utter-worldly Hollis Resnik as Judy Garland in Milwaukee Rep’s specular visceral production of  Peter Quilter’s End of the Rainbow, makes one appreciate the singular power of the art form.

Since its Australian premiere in 2005, Mr. Quilter’s work garnered cult like following.  And no wonder, as a show that focuses on the final act of Ms. Garland’s life has a built in audience base of, well you know.  But as Mr. Quilter’s play evolved and the incredible Tracie Bennett began to inhabit the legend in London, End Of The Rainbow went from being viewed as another Judy Garland story, to that of the most honest look at the star’s ongoing war within her soul.  Ms. Bennett’s gut wrenching performance became the talk of the West End, and subsequently brought the show to Broadway in 2012.

For in the end, that is what has made Judy Garland the icon that she still is.  She was vulnerable, let the world know it and they in turn embraced her for it.  Garland’s need to be loved, alas, could never be fulfilled because in the end, she never loved herself.  The fans did and still do carry that burden for her.  That is the unique and honest view that Mr. Quilter allows his story to carry as well; making Judy Garland a complicated, funny, passionate and fully relatable character.  We as viewers can now find a piece of themselves in the woman of Garland, rather than the legend of Garland.

End of the Rainbow takes place during Garland’s infamous Talk of the Town engagement in London a few months before her death.   The concert engagement was to be another one of her comebacks, but with new young beau and enabler Mickey Deans (Nicholas Harazin) in tow, it is clear that this will not end well.  It is clearest to her gay pianist, Anthony (Thomas J. Cox), who after many years absent once again is entrusted to accompany Ms. Garland for the engagement.  As the play deepens, Anthony walks his own fine line of sanity and takes a journey as deep as Garland’s.

Milwaukee Rep’s artistic director Mark Clements (one of my favorites) steers on a course of absolute authenticity, allowing for a much more balanced and nuanced production then the one I saw in New York.   Make no mistake, as much as this is a show centered on the actor cast as Judy, the success of the play has to with the director’s ability of letting the qualities of the media Garland weave in seamlessly with the addicted, real Garland.   Mr. Clements succeeds on every level and each of the main characters goes through a major, life altering transformation before our eyes.

Clements’ cast works wonders.  Harazin’s Mickey Deans, is multi-layered and never once inauthentic in his interpretation.   His arch from initial young hanger on-er to manipulating enabler is quite remarkable.  Moreso, in the end, you may still believe he may be doing it for what he thinks is Judy’s best interest.

As, Anthony, Mr. Cox is rarified and heart wrenching.  The reason is twofold, first is his nuanced understanding of his character’s inner turmoil and second is his connection and chemistry to Ms. Resnik’s Garland, whereby when the his proposal is made, it is real and palpable for both characters.

Then of course there is Ms. Resnik.  We who are privileged to know this performer are always amazed for her sheer, raw talent.  Anyone who saw Hollis in Gary Griffin’s “Follies” will know how this actress can constantly reinvent not only herself, but characters we all think we know.  From Aldonza in Man of la Mancha to Edie in Grey Gardens, to a simple cabaret show for 50 people, Ms. Resnik is simply one the best, period.  To see her work those theatrical muscles again as Judy Garland is nearly transcendent.

In the play, Garland is scripted to move through emotional levels at an instant and Hollis never misses a beat.  Then there are the vocals, one after another of Garland’s hits, which lays perfectly now in Ms. Resnik’s vocal belt range, is again a marriage between the singer’s own voice and enough hints of the actual Garland that we never think this in only a imitation.   And for those who think they have heard the signature tune, you will barely recover from Hollis sitting at the end of the stage, singing the song as written.   The words are clear and have never had such truth.

Technically the production moves along flawlessly, with a gorgeous and functional set by Dan Conway that makes full use of the Rep’s turntable, allowing the stage to go from hotel suite to concert hall in seconds.  Jesse Klug’s lighting works on every level and has a beautiful way of hitting many of costume designer Holly Payne’s sequinned suits for Garland.

Whether one is fan of Garland or not, there is something for everyone to take away in this production.   Whatever preconceived notions you have of Ms. Garland, by the end of the play, you will certainly view her in a different or more understanding light.  Judy (Hollis), you made us love you and we did want to do it.

For my colleague Al Bresloff’s review of End Of The Rainbow, visit his site at  AroundTheTownChicago.com