HOLLAND-DOZIER-HOLLAND, MOTOWN LEGENDS AND COMPOSERS OF BROADWAY-BOUND “FIRST WIVES CLUB: THE MUSICAL” TO BE HONORED WITH STAR ON THE HOLLYWOOD WALK OF FAME 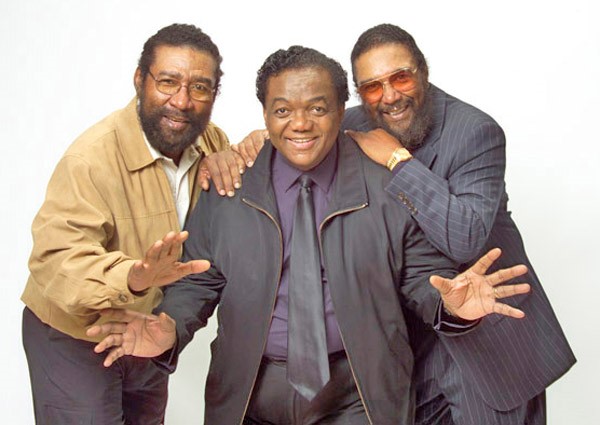 The Hollywood Chamber of Commerce proudly announced that songwriters and producers Holland-Dozier-Holland will be honored with the 2,543rd star on the Hollywood Walk of Fame tomorrow, Friday, February 13, at 11:30 a.m. The star in the category of Recording will be dedicated near the Live Nation Building at 7070 Hollywood Boulevard. Holland-Dozier-Holland have reunited for the first time in more than 30 years to write the score for the new Broadway-bound musical First Wives Club, which will make its World Premiere in Chicago on Tuesday, February 17, 2015 and play through March 29, 2015 at the Oriental Theatre (24 West Randolph St.).

The new Broadway-bound musical First Wives Club, with music and lyrics by Brian Holland, Lamont Dozier and Eddie Holland, “We are so happy to honor these musical geniuses with their well-deserved star on the Walk of Fame very fittingly during Black History Month,” stated Walk of Fame Producer Ana Martinez. “Their music has and will continue for decades to be a part of American music history.”

Helping emcee and Hollywood Chamber President/CEO Leron Gubler to unveil the star will be Berry Gordy, Founder of Motown and Mary Wilson, former member of The Supremes.

The event will be streamed live exclusively on www.walkoffame.com.

Brian Holland, Lamont Dozier and Eddie Holland wrote and produced many of the songs that are most closely identified with Motown, including such classics as “Stop! In the Name of Love” and “You Can’t Hurry Love” (the Supremes), “Heat Wave” and “Jimmy Mack” (Martha and the Vandellas), “Reach Out I’ll Be There” and “Baby I Need Your Loving” (the Four Tops), and “Can I Get a Witness” and “How Sweet It Is to Be Loved by You” (Marvin Gaye), among many others from their Hitsville tenure. In their behind-the-scenes roles as staff producers and songwriters, Holland-Dozier-Holland was as responsible as any of the performers for Motown’s spectacular success.

Holland, Dozier and Holland were all born in Detroit: Brian Holland on February 15, 1941; Lamont Dozier on June 16, 1941, and Eddie Holland on October 30, 1939. Their relationship with Motown founder Berry Gordy dates back to 1958, before he started the famous Motown Company. Eddie Holland’s recording debut, a 1958 Mercury single, “You,” was one of Gordy’s earliest productions. Gordy also produced some sessions for Brian Holland, while in 1961, Lamont Dozier began recording for Anna Records, owned by Gordy’s sister Gwen.

Holland, Dozier and Holland inaugurated their collaboration in 1962, with the single “Dearest One,” released under Dozier’s name on the Mel-O-Dy label, a Motown subsidiary. The formation of the team was a logical outcome and their workplace was a tiny recording studio in a converted garage at Motown’s “Hitsville U.S.A.” offices.

In short order, Holland-Dozier-Holland wrote and produced Martha and the Vandellas’ “Come and Get These Memories,” which went to No. 3 on the R&B chart and No. 29 on the pop chart in 1963. That same year, the trio also wrote and produced Marvin Gaye’s “Can I Get a Witness,” the Marvelettes’ “Locking Up My Heart” and “Forever,” the Miracles’ “I Gotta Dance to Keep from Crying” and “Mickey’s Monkey,” and Martha and the Vandellas’ “Heat Wave” and “Quicksand.”

All of those songs preceded the trio’s record-breaking success with the Supremes. In June 1964, “Where Did Our Love Go” became the first of six consecutive No. 1 singles for the Supremes and Holland, Dozier and Holland.

The trio epitomized the Motown sound: a fluid, up-tempo style that combined catchy lyrics with the fervor of gospel, the groove of R&B and the polish of pop. More than 50 of Motown’s most memorable songs can be attributed to Holland-Dozier-Holland. They produced hits for nearly every act on the Motown family of labels.

The trio left Motown in 1968 to found their own Invictus/Hot Wax label, where they continued their hit-making ways with Freda Payne’s “Band of Gold,” Chairman of the Board’s “Give Me Just a Little More Time,” and the Honey Cones’ “Want Ads.” The sound of those records – with syncopated rhythm guitars and gospel-inflected vocal arrangements delivering catchy lyrics – was as distinctive as their Motown classics.

When Invictus/Hot Wax folded in 1973, Dozier returned to his performing career, resulting in a string of solo records that continues to be sampled by artists ranging from Lil Wayne to Linkin Park. He continues to achieve success and accolades as an artist, producer, songwriter and most recently USC professor.

In the 70s, the Hollands wrote and produced for a number of artists, including the Supremes and Michael Jackson. In 1988, the Holland brothers founded the Holland Group production company and revived their label Music Merchant. They continue to release material from their classic catalog as well as new material.

Holland-Dozier-Holland have reunited for the first time in more than 30 years to write the score for the brand new musical version of The First Wives Club, based on the best-selling novel and the hit 1996 film. The score includes brand-new, original songs along with Holland-Dozier-Holland classics “Reach Out I’ll Be There,” “Stop! In the Name of Love” and “I Can’t Help Myself (Sugar Pie, Honey Bunch).” The musical begins its pre-Broadway World Premiere run at Chicago’s Oriental Theatre onFebruary 17 and runs through March 29. For more info, visit http://www.firstwivesclubthemusical.com/

ABOUT FIRST WIVES CLUB With a book by five-time Emmy Award nominee Linda Bloodworth Thomason and direction by Simon Phillips, First Wives Club: The Musical features new original songs and classic hits by Holland-Dozier-Holland, including “Reach Out…I’ll Be There,” “Stop! In the Name of Love” and “I Can’t Help Myself (Sugar Pie, Honey Bunch).” First Wives Club also features Arranging and Orchestrations by H.B. Barnum (best known for his work with Aretha Franklin) and musical direction byKenny Seymour (Memphis; The Wiz).

In First Wives Club, three former college friends reunite to find that they have more in common than their alma mater! Ditched by their respective husbands for younger women, they band together to settle scores with the men who did them wrong. First Wives Club is a hilarious, inspiring, and empowering story about friendship at its strongest… and revenge at its sweetest.

First Wives Club is based on the hit 1996 Paramount feature film and the original best-selling novel by Olivia Goldsmith, and adapted from an earlier version of the musical by Rupert Holmes, with additional material by Simon Phillips.