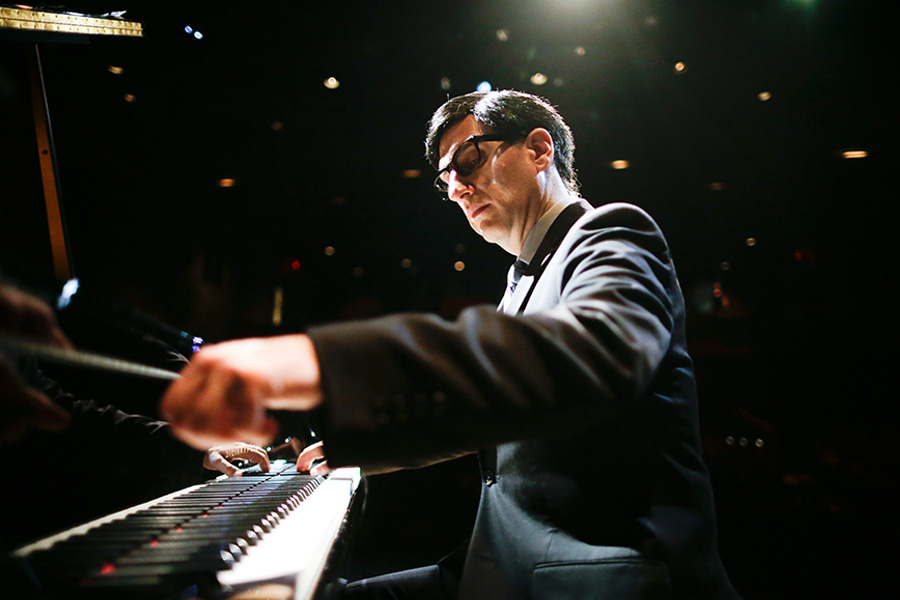 Hershey Felder is setting up camp on Royal George Theatre’s mainstage for a full season of shows starting September 8. The season includes the record-breaking production of Hershey Felder as Irving Berlin; a new production of the award-winning, internationally-acclaimed play Jamaica, Farewell,and the Midwest premieres of London import I Found My Horn and audience favorite Baritones Unbound.

“Chicago and The Royal George have long been theatrical homes for me,” says Felder. “My experience since arriving in Chicago with George Gershwin Alone in 2004 and continuing with many other productions, is that Chicago audiences are the savviest and warmest in the country. I am committed to breathing new life into the theatre and bringing high-quality, thought-provoking shows to the stage.”

The season opens with Jamaica, Farewell, directed by Joel Zwick (My Big Fat Greek Wedding) and written and performed by Debra Ehrhardt. The play chronicles Ehrhardt’s escape from revolution-torn Jamaica to fulfill her lifelong dream of coming to America. When she was an 18-year-old secretary in Kingston, Jamaica, she and her passion for America bumped into a handsome CIA agent on her lunch break. She began a dangerous adventure that only the single-minded passion of a teenage girl would chance. Performances of Jamaica, Farewell begin Tuesday, September 8 at 7:30 p.m. and run through October 11th. All tickets are $50.

From London’s West End, I Found My Horn, written by Jasper Rees and Jonathan Guy Lewis and directed by Harry Burton, opens October 30. Based on British journalist Jasper Rees’ autobiographical book A Devil to Play, I Found My Horn, is both a wildly funny and deeply touching musical look at a man encountering a mid-life crisis. Waking up at 40 to a broken marriage and a studio apartment, along with the realization that he’s done nothing to make himself memorable, a man climbs to his attic to clean out his things at his soon-to-be ex-wife’s demand. It is there that he finds his old French horn.  After having abandoned it 25 years earlier, he seeks redemption via the sixteen feet of treacherous tubing that he never mastered in his youth. The show runs through December 6. Tickets are $55.

A special holiday engagement of Baritones Unbound opens December 11 and runs through January 3, 2016, starring Broadway great Marc Kudisch and international opera greats Mark Delavan (“The Voice of God”) and Nathan Gunn (amusingly referred to as the Barihunk or the Hunkitone). Written by Kudisch, Merwin Foard, Jeff Mattsey, and Timothy Splain and directed by David Downer, Baritones Unbound explores “the uncommon voice of the common man.” Using theatrical and musical mechanisms, world-renowned voices but, above all, a lot of comedy, Kudisch, Gunn and Delavan give an unforgettable, laugh-filled, thoughtful and ultimately moving musical theatrical evening.

All tickets are $60 with the exception of a special New Year’s Eve performance which will include a champagne and dessert reception with the artists. Tickets for the New Year’s Eve show are $150.

Finally, Hershey Felder brings to life the remarkable story of Irving Berlin, “America’s Composer,” in the Chicago premiere of Hershey Felder as Irving Berlin, directed by Trevor Hay. From the depths of anti-Semitism in Czarist Russia, to New York’s Lower East Side, and ultimately all of America and the world, Berlin’s story epitomizes capturing the American dream.  Featuring the composer’s most popular and enduring songs from “God Bless America” to “White Christmas” and beyond, Felder’s masterful creation of character and musical performance makes this evening with Irving Berlin an unforgettable journey. Hershey Felder as Irving Berlin runs April 7- May 22, 2016. Tickets are $60.

Tickets for all four productions are on sale at the Royal George Theatre and may be purchased by calling 312.988.9000. Box office hours are 10 a.m. to 6 p.m. Tuesday through Saturday. Tickets may also be purchased online at www.ticketmaster.com.