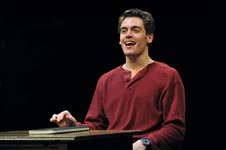 How refreshing it was to sit in the Marriott Lincolnshire Theatre and watch something magical evolve on the stage. After the last few weeks of viewing various productions in their umpteenth incarnation, Hero, an original musical by Michael Mahler and Aaron Thielen is a bit of a revelation. It is smart, emotionally raw and contains a fantastic score that rivals any new musical since Next To Normal.

Hero is actually our 28 year old protagonist, Hero Batowski, (Erich Bergen) a do-it-yourself comic book illustrator, who lives at home and works alongside his widower father (Don Forston) at his comic book shop. The story begins ten years after the death of Hero’s mother who perished in a horrific car accident. Her death has left a broken family with father and son relying on each other in emotionally unhealthy ways. Enter Hero’s high school sweetheart, Jane Foster (Heidi Kettenring) who rekindles not only romantic feelings of the past but her arrival stirs Hero’s buried emotions to the core.

As in most musicals of this nature, there are the standard barer supporting players. Kirk, the over-the-top lovable best friend of Hero, played with great skill by Alex Goodrich. Then, in this corner, we have Jane’s confident, the tightly wound Susan Schmitty, deliciously milked by Dara Cameron. A very sincere Jonah Rawitz plays Kirk’s younger brother Nate, who is a bullied outcast youth whose solace is found in the company of the comic book shop. 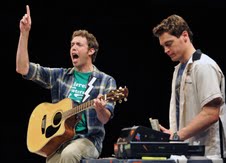 Arron Thielen’s book, though still undeveloped, contains layer upon layer of dramatic substance. Hero: The Musical tackles many heavy subjects and treats them with great respect. Using the backdrop of the “comic-book nerd”, Mr. Thielen explores the psychological struggles these characters are engaged in and then makes the audience connect in their own way with these issues. By using the fantasy realm of superheroes as escapism, the reality of dealing with how difficult it is for many people to function in everyday society, for whatever reason, is brought to the forefront magnificently.

As good as Mr. Thielen’s book is, it is Michael Mahler’s score that allows Hero: The Musical to soar. Each song fits perfectly into the story and melodically the score is far superior to anything Mr. Mahler has composed to date. From the opening number, “My Superhero Life” which is a rhythmic gem to the haunting “There Is Wonder All Around”, Mr. Mahler can, without any hesitation, take his place amongst his cotemporaries, Jason Robert Brown and Tom Kitt. More than that, being a fine actor himself, Mahler knows how musically explore each character he composes for and that is a gift very few of his contemporaries can claim.

As Hero, Erich Bergen is so perfectly cast that he has the audience eating out of his hand from the moment he walks on the stage. Mr. Bergen possesses a powerful yet tender tenor voice and has amazing control of his upper falsetto range, which many of Hero’s numbers vocally fall. He also brings a truth to Hero that you never once doubt and gives a performance that is never forced. Paired with the equally gifted Heidi Kettenring, who I have many times said is one of the finest musical theater actresses working today, proves her worth here. Her character Jane could very easily have fallen into girl-next-door mode, but her innate nature to find the soul of a character shines through here. Moreover, vocally, Ms. Kettenring has never sounded better. As Hero’s father, Don Forston brings warmth and a commanding vulnerability as he deals with mounting guilt of his own. 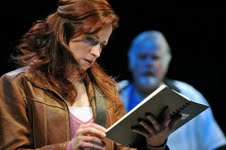 David H. Bell does double duty as director and choreographer to mixed results. There are certain scenes that Mr. Bell tends to over-direct and others where he seems to have spent little time dissecting. There are also some grotesquely misguided blocking actions (and inactions) which are very rare at the Marriott. There were entire scenes the audience section I was sitting in was staring at the back of actors’ heads. With the gift of a rotating stage, this does not have to happen. However, more disturbing than the blocking is the decision to include, rather than cut, the final scene of the musical which is nothing but pure frivolity. It’s inclusion takes away all the emotional impact and gravitas of the prior scene (which is the natural end of the musical) and almost derails the entire story. I am still trying to wrap my head around this decision.