Hell in a Handbag’s Sell Out Hit Production of BETTE, LIVE AT THE CONTINENTAL BATHS Extends to August 28 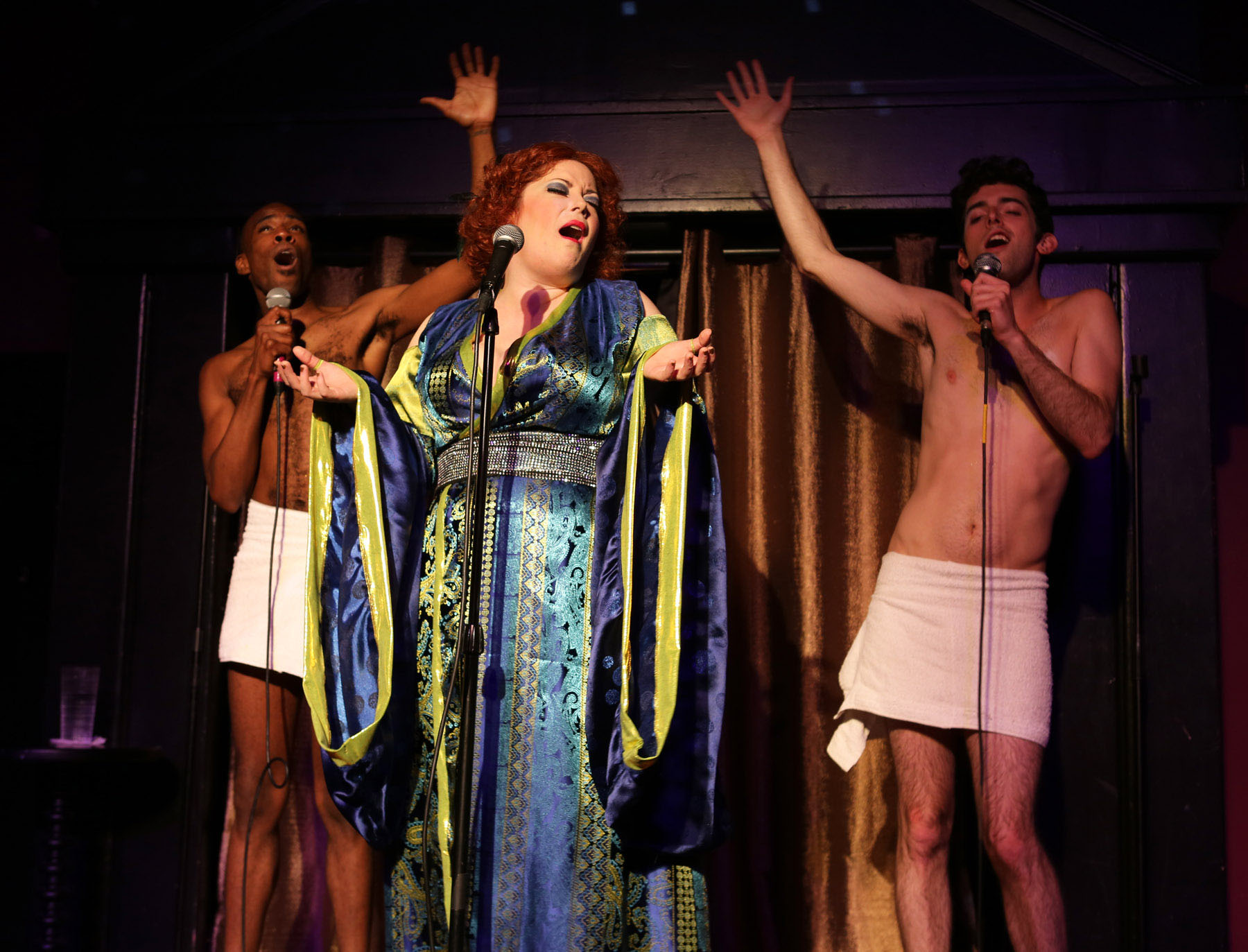 Hell in a Handbag Productions’ sell-out hit BETTE, LIVE AT THE CONTINENTAL BATHS has added one additional performance, extending through August 28, 2015 at Mary’s Attic, 5400 N. Clark St. in Chicago’s Andersonville neighborhood. The musical tribute to the legendary Bette Midler stars powerhouse Caitlin Jackson with direction and and choreography by Christopher Pazdernik and music direction by Jeremy Ramey (as Barry Manilow). Tickets are currently on sale at www.handbagproductions.org.

Join Handbag Diva Caitlin Jackson as she pays tribute to the Divine Miss M’s legendary cabaret act at the equally legendary Continental Bathhouse in New York City. Featuring live music, this loving recreation of the beginning of Ms. Midler’s stellar career features the fabulous songs she sang for the boys in the bathhouse, including Chattanooga Choo-Choo, Superstar, and of course, Chapel of Love done in Bette’s inimitable style. Well, nearly inimitable. Handbag transforms the newly remodeled Mary’s Attic into the legendary Bathhouse (just tell your great Aunt Gertie this is where young men went to clean up back in the day) complete with hot dancing boys wearing strategically placed towels… and steam… lots of steam.

Cast: Caitlin Jackson as Bette Midler and Jeremy Ramey as Barry Manilow with TJ Crawford and Will Wilhelm as The Bathhouse Boys.

Tickets: Preview: $12. Regular run: $20 in advance, $22 at the door. Limited VIP reserved seating with drink $35. Big Gay Group Rate: $16 for groups of 10 or more. Tickets are currently on sale at www.handbagproductions.org.

Christopher Pazdernik (Director/Choreographer) A director/choreographer with “a near-encyclopedic knowledge of musicals” (Newcity Stage), Christopher’s Chicago credits include Bloody Bloody Andrew Jackson and Bombs Away! (Bailiwick); A Streetcar Named Desire, Spamalot and Evita (Jedlicka); Miracle on 34th Street, Anyone Can Whistle and City of Angels (Porchlight); Time After Time: The Songs of Jule Styne (Theo Ubique); The Full Monty (Village Players); a series of musical theater revues at Davenport’s; and a Jeff nomination for co-choreographing Spamalot with Nightblue. Also, creator and co-host of Option Up! a live monthly musical theater talk-show at Stage 773. Christopher returns to Handbag after directing the staged reading of Bewildered! last fall.

Jeremy Ramey (Music Director) is a concert pianist, conductor and music director based in Chicago. He was awarded the Jeff Award for Music Direction for his work on Light in the Piazza in 2012 and again in 2013 for Smokey Joe’s Cafe. Some of his favorite projects include Altar Boyz at Drury Lane Downtown, Hats! with Grammy Award winner Melissa Manchester and Tony nominated director Lynn Taylor-Corbett, Forever Plaid at Drury Lane Oakbrook, Cabaret at Marriott Lincolnshire and the premiere of The Adding Machine at Next Theater in Evanston. In addition to his work as a music director, Jeremy has also taught music and given master classes at several colleges and universities including Columbia College, Northwestern University, University of Memphis and Loyola University. Jeremy received his training in piano performance at Rhodes College, Northwestern University and The Juilliard School of Music.

Caitlin Jackson (Bette Midler) This is Caitlin’s fourth full production with Handbag and the second as an Ensemble Member. Previous Handbag credits include Miracle! (Hershey/Barb) by Dan Savage, the Bewildered! staged reading as Gladys Kravitz, Rudolph the Red-Hosed Reindeer 2014 (Jane Donner/Dolly) and Christmas Dearest (Bette Davis). Outside of Handbag she was most recently seen in Coraline (Miss Spink) with Black Button Eyes Productions and, last Halloween, she originated the lead role of Serena in a brand new musical, Witches Among Us with New American Folk Theatre (where she is also a Company Member). She is proud to have worked on multiple projects with Knife & Fork, Cowardly Scarecrow, Ludicrous, Factory Theater, Strangeloop and Wayward Productions (with whom she is a proud Artistic Associate), all in the last three years.