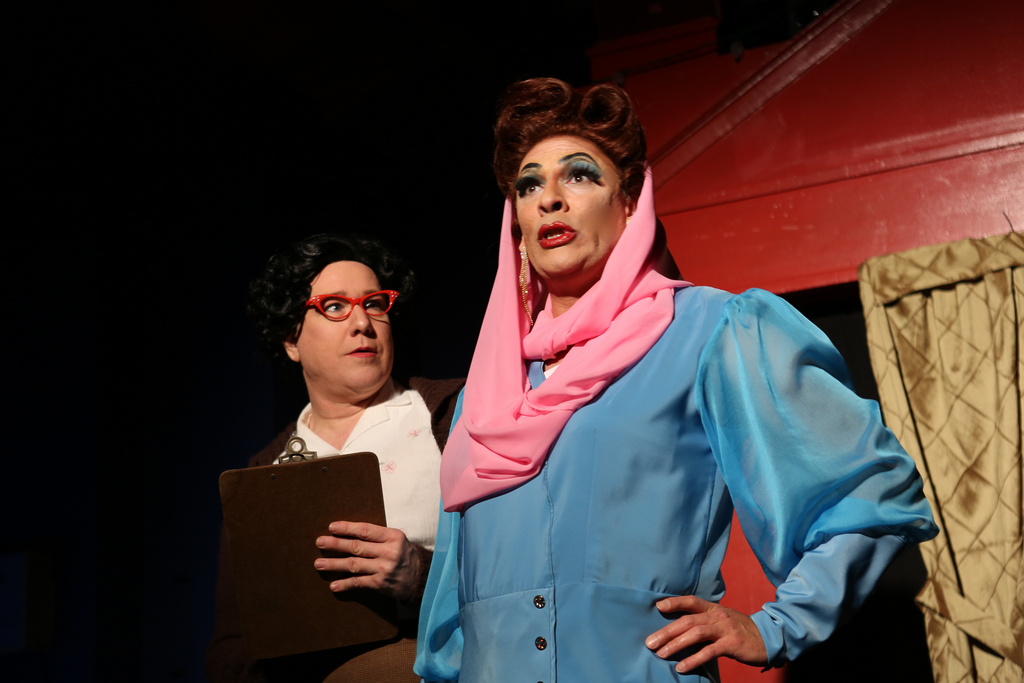 Everybody’s favorite holiday bitch is back and she’s meaner then ever in the return of CHRISTMAS DEAREST, Hell in a Handbag Productions’ Joan Crawford-infused parody of A Christmas Carol by David Cerda, directed by Steve Love. CHRISTMAS DEAREST will play November 28, 2015 – January 2, 2016 at Mary’s Attic, 5400 N. Clark St. in Chicago’s Andersonville neighborhood. Tickets go on sale Thursday, October 1, 2015 at www.handbagproductions.org. The press opening is Friday, December 4 at 7:30 pm.

T’was the night before Christmas and MGM’s biggest star, Miss Joan Crawford, is filming the title role in “Oh Mary,” a splashy new musical biography about The Virgin Mary, Mother of God. Poor Joan needs a drink. And a REWRITE! Jesus has all the best lines, the costumes aren’t sexy at all, and the guy playing Joseph is a big clumsy oaf! If they will just do it Joan’s way maybe she can salvage the picture. Join Handbag as Joan visits her shady past, her appalling present and her eye-popping future – in a tale of glamorous redemption set to music.

David Cerda (Playwright) is a co-founder and Artistic Director of Hell in a Handbag Productions and has written, Scream, Queen, Scream!, POSEIDON! An Upside Down Musical, Rudolph the Red-Hosed Reindeer, Caged Dames, Lady X, SCARRIE The Musical, Christmas Dearest, The Birds, Lady X, and a few others. As an actor or he has worked with A Red Orchid Theatre, The New Colony, Corn Productions and Sweetback Productions. Cerda was also was a lyricist an untitled animated feature film for Amazon Studios.

Steve Love (Director) is a 2015 Jeff Award Nominee, honored for his choreography of Caged Dames at Theater Wit. A Chicago transplant from Maryland, Steve has worked as a performer, choreographer and director throughout the East Coast, the Midwest and in the Caribbean with Disney Cruise Lines. Most recently, Steve was seen onstage as Stanley in Stanley in the Name of Love (The New Colony), and in MIRACLE! (Dan Savage’s parody of The Miracle Worker with Hell in a Handbag Productions), where he portrayed that famous deaf-blind Drag Queen, Helen Stellar. Other memorable roles include the Emcee in Cabaret, Bobby in A Chorus Line, and Dickey in the original Baltimore production of The Awesome 80’s Prom! (Dir. by Tony Award winner Ken Davenport). Steve has choreographed and performed around town, but is making his Chicago directorial debut with Christmas Dearest.