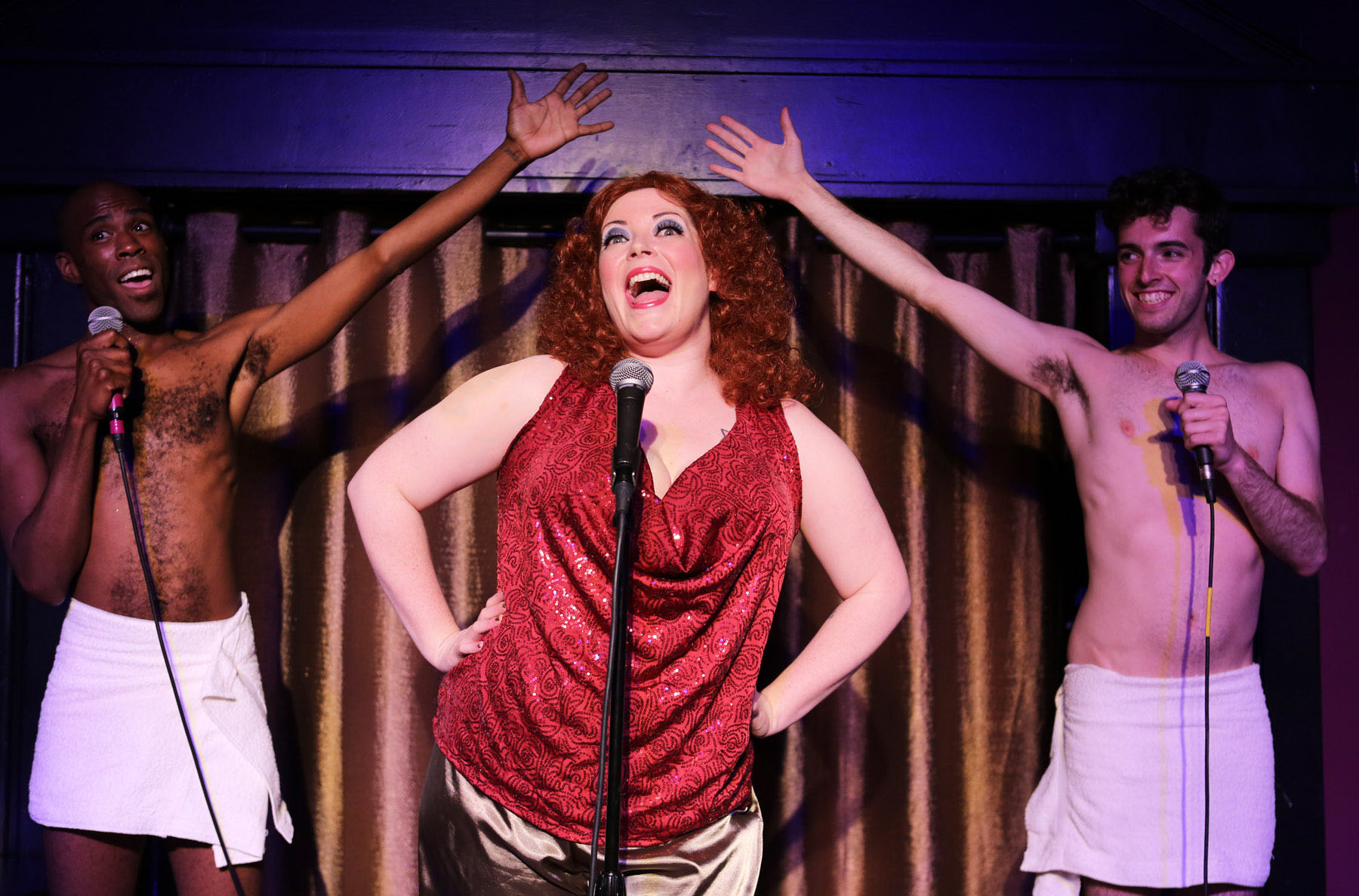 left to right) TJ Crawford, Caitlin Jackson and Will Wilhelm in Hell in a Handbag’s BETTE, LIVE AT THE CONTINENTAL BATHS, a musical tribute to the Divine Miss M’s legendary NYC concert, directed and choreographed by Christopher Pazdernik with music direction by Jeremy Ramey. Photo by Rick Aguilar Studios

Hell in a Handbag Productions is pleased to announce its 2016 Season, and this year no holy cow is too sacred. What could be better than kicking off summer with the Chicago premiere of THE DIVINE SISTER, the hilarious comic homage to almost every Hollywood nun story imaginable by the divine high priestess of camp Charles Busch? How about staging it in an actual church? Directed by Shade Murray (Pilgrim’s Progress), the play will be performed at the lovely Ebenezer Lutheran Church in Chicago’s Andersonville neighborhood.

Halloween has always been a favorite time of year for Handbag audiences and we always give our audiences what they want – parody so dead-on it’s frightening! The world premiere comedy SCOOBY DON’T follows the adventures of four adults – Scaggy, Fredd, Velva and Daffy – who wear the same clothes everyday while driving around in a van with their mentally impaired talking dog, ‘solving mysteries.’ Join Handbag this fall as Artistic Director David Cerda and director Derek Van Barham lampoon a cartoon classic, being performed at Mary’s Attic above Hamburger Mary’s.

No Christmas would be complete without a Handbag holiday show and keeping in the tradition of keeping it fresh, Handbag is premiering a new holiday show with an old friend. THE RIP NELSON HOLIDAY SPECTACULAR stars Ed Jones as Rip Nelson, the embittered television has-been with a razor sharp timing and a monkey on his back. Tune the channel to “1982” for this world premiere by David Cerda, directed by Steve Love at Mary’s Attic.

Subscriptions for Hell in Handbag’s 2016 Season are currently available at www.handbagproductions.org.

Hell in a Handbag’s season opener is a comic homage to nearly every nun movie to come out of of Hollywood. Lifiting from films like The Song of Bernadette, The Bells of St. Mary’s, The Singing Nun and Agnes of God, THE DIVINE SISTER tells the story of St. Veronica’s indomitable Mother Superior (David Cerda) who is determined to build a new school for her Pittsburgh convent. Along the way, she has to deal with a young postulant who is experiencing “visions,” sexual hysteria among her nuns, a sensitive schoolboy in need of mentoring, a mysterious nun visiting from the Mother House in Berlin and a former suitor intent on luring her away from her vows. Funny, clever and even a little sweet, THE DIVINE SISTER springs from the mind of Charles Busch, creator of the camp the classics Die, Mommie, Die!, Psycho Beach Party and Vampire Lesbians of Sodom.

BETTE, LIVE AT THE CONTINENTAL BATHS

When Velva’s aunt needs help, the gang comes to the rescue! Velva never mentions that her aunt is multi-platinum recording artist and Oscar winner, Cher (ensemble member Ed Jones). Cher is also joined by Chaz Bono and Kris and Caitlyn Jenner for a whacky mixed-up adventure you won’t forget – no matter how hard you try! SCOOBY DON’T is not only a parody of the classic Scooby Doo cartoon but also explores social and gender political correctness and inner and outer identity and appearances. The big mystery here is if Scooby and the gang can navigate social moors in this modern world.

Hell in a Handbag’s favorite bitter has-been comic genius returns! Audiences fell in love with Rip Nelson in our 2010 hit The Rip Nelson Halloween Spooktacular – now he’s back and ready to deck your halls in THE RIP NELSON HOLIDAY SPECTACULAR. It’s 1982 and a newly sober Rip (ensemble member Ed Jones) manages to land another TV special after the death of his arch-rival, Paul Lynde. Rip is determined to get his career back on track but can he handle the stress of a network television special and stay sober? Luckily he’s got help from a cavalcade of the hottest stars of 1982! Rip pulls every trick in the book to breathe some life in the dying variety series format and save his career but soon questions if his career is worth saving.