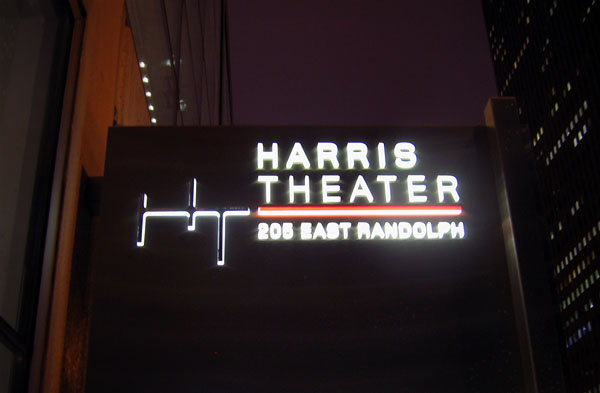 On Wednesday, February 11, The Harris Theater for Music and Dance begins a $5 million renovation project to reimage the patron experience.  The addition of two new high-capacity elevators will make the path to each patron’s seat easier and simpler. The expanded lower Randolph Street lobby will be the heart of intimate audience and artist engagement.

The Harris Theater will remain open during construction and continue to present the most inspired music and dance from around the world.   Construction will begin on the west staircase on February 11, 2015, followed by the east staircase upon completion.   The project is scheduled to be completed December 2015.

“From the beginning we imagined a place that spoke to higher standards and culturally richer communities,” said Michael Tiknis, President and managing Director of the Harris Theater “During the past 10 years we’ve been lucky to host spectacular artists, thinkers, and performers, but our great fortune is only as good as the audience we serve.  This renovation, made possible through the Imagine campaign will enhance the patron experience by reducing travel time and increasing access throughout the theater.”

Imagination walls will be installed to mask construction and engage patrons during the renovation incorporating tablets in a multi-media installation first floor of the lobby. Video footage will include renovation updates, candid artist interviews and community engagement activities.  The Theater is encouraging patrons to share their creativity and ideas on what they imagine for the future of the performing arts at the Harris with interactive art walls on lobby levels 2, 3, and 5. These imagination walls will be covered with dry-erase vinyl and neon liquid chalk markers will be provided for sharing their visions. Visitors are also encouraged to take pictures, videos, and to share their experience on social media with the hashtag #imagineHT.

About Imagine: The Campaign for Harris Theater

The Harris Theater Board of Trustees strategically identified Theater needs of $38.8 million to support the 3 core areas of the mission:

Harris Theater maintains its founding principle to resident companies with financial and technical support. In just one decade, over $19 million in direct financial grants and in-kind capacity-building services has been given to resident and guest companies of the Harris Theater. These grants have enabled music and dance companies to perform at the Theater with underwritten or subsidized rent, to enhance their performances with technical support, receive in-kind front of house and box office support, professional development and capacity-building programs, such as the Harris Theater Learning Lab, for resident companies, preparing the next generation of arts administrators, and new audience engagement strategies.

Presenting nationally and internationally acclaimed artists and ensembles that represent the most celebrated and eclectic music and dance, Harris Theater Presents is raising the sights for Chicago’s cultural landscape. In addition, Theater is actively commissioning new works, presenting premieres and facilitating collaborations, which led to the critically acclaimed launch of Beyond the Aria with Lyric Opera of Chicago.

Programs advance access to, and understanding of, the performing arts through the Family Series and the lunchtime Eat to the Beat series. Collaborating with community arts centers and health and human service agencies, the Theater has provided more than 8,600 complimentary tickets through its Access Tickets Program. Through the Teen Arts Project, the theater partners with public and private schools to provide behind-the-scenes access to visiting world-class artists through master classes and artist discussions.  Education Partners include:   Chicago High School for the Arts, Music Institute of Chicago, After School Matters, Chicago Academy for the Arts, Ariel Community Academy and Chicago Youth Symphony Orchestra.

Capital renovations will ensure Harris Theater’s ability to remain a state of the art facility, improving the performance experience for patrons and artists. The three critical elements of the 10 year capital investment include:

The Imagine campaign is led by four transformational gifts:

Harris Theater for Music and Dance

The Joan W. and Irving B. Harris Theater for Music and Dance is a 1500-seat state-of-the art performance venue located in Chicago’s Millennium Park. Opened in November 2003, the nonprofit Harris Theater was the first multi-use performance venue built in downtown Chicago since 1929.  Harris Theater serves as a unique national model of collaboration between the philanthropic community and performing arts organizations in music and dance. More than a decade later, the theater features the most diverse offerings of any venue in Chicago, hosting local, national, and internationally renowned artists and ensembles.

The Harris Theater’s primary mission is to partner with an array of Chicago’s music and dance performing arts organizations to help them build the resources and infrastructure necessary to achieve artistic growth and long-term organizational sustainability. The Harris Theater’s original group of 12 resident companies has grown to include 35 diverse and exceptionally talented performing arts organizations, including internationally acclaimed Hubbard Street Dance Chicago, Music of the Baroque, Chicago Opera Theater, Chicago Symphony Orchestra’s MusicNow, and collaborations with Lyric Opera of Chicago, National Museum of Mexican Art, Museum of Contemporary Art Chicago, and Columbia College Chicago. Through these partnerships, the Theater has earned national recognition as a distinctive model for collaboration, performance, and artistic advancement.

The Theater supports its mission by providing partner organizations with subsidized rental, technical expertise, and marketing support, allowing the organizations to focus on what they do best—bringing the finest in music and dance performances to the public. The Theater offers professional development opportunities, including the innovate Learning Lab, endorsed with grants from the National Endowment for the Arts.

The Harris Theater is also dedicated to presenting internationally acclaimed music and dance organizations to enhance its reputation as well as to help build audiences for the Theater’s resident companies. Through the Harris Theater Presents series, the Theater has achieved widespread recognition as a vital cultural anchor in Chicago.  Mikhail Baryshnikov, Renee Fleming, the Paris Opéra Ballet, the Hamburg Ballet, Lang Lang, the New York City Ballet, the San Francisco Ballet, Alonzo King LINES Ballet, Chamber Music Society of Lincoln Center, Sphinx Virtuosi, and many others have graced the Harris’ Elizabeth Morse Genius Stage through this series.

To learn more about the Harris Theater, please visit HarrisTheaterChicago.org. Call the Marketing Department at 312.334.2419 to request a brochure or additional information.