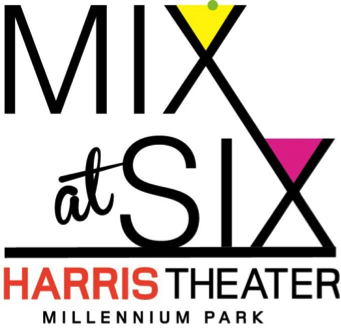 The Harris Theater, today, announced the creation of a series that will offer some of the Harris’ most provocative and innovative work, at a time of day that makes it one of our most accessible and engaging performance series yet. MIX at SIX is the Harris’ first ever happy hour performance series featuring six after work performances throughout the season. Beginning at 6PM, these performances see renowned artists from around the world performing fast-paced, one-hour performances after work. Enjoy signature cocktails from Harris Theater and food from Chicago’s most in demand food trucks, available for purchase on Lower Randolph outside the lobbies. By purchasing a subscription, you can enjoy all six performances for $50 – just over $8 per performance.

“The creation of the MIX at SIX series includes some of the most challenging and unusual work we are presenting at the Harris. This series showcases the cutting edge creativity happening in the arts right now and gives patrons the opportunity to enjoy all that is current, fresh and new,” said Harris Theater President and Managing Director Michael Tiknis. “The happy hour model is appealing to us because of its accessibility after hours, and along with bringing you the most breathtaking music and dance in the world, MIX at SIX is the strongest offering in town.”

MIX at SIX subscriptions for the full series are available now for $50; single tickets are $10. To purchase tickets, please visit HarrisTheaterChicago.org or call 312.334.7777.

AXIS Dance Company has become one of the world’s most acclaimed and innovative ensembles of performers with and without disabilities. Since their founding in 1987, they have won seven Isadora Duncan Dance Awards, acknowledging exceptional creative achievements in the performance and presentation of dance. The Company has toured extensively throughout the U.S. and abroad, and, this year, received a Leadership Grant from the prestigious Doris Duke Charitable Foundation. AXIS collaborates with top choreographers and composers to create completely new and innovative performances.

This performance is made possible with support from Paul S. Boulis, lead sponsor, and Sunny and Gery J. Chico, Community Engagement Sponsors.

Jessica Lang, known for her signature structural style, is a Joyce Theater Artist Residency recipient and famed choreographer who has performed at such renowned venues and festivals as BAM, Jacob’s Pillow and the Kennedy Center. Lang’s choreographic style has earned her the reputation of “a master of visual composition” by Dance Magazine as she seamlessly incorporates striking design elements into emotionally engaging contemporary works. Holl, the world-renowned visionary known for his addition to the Kennedy Center in DC, Pratt Institute in Brooklyn, Campbell Sports Center at Columbia, Horizontal Skyscraper in China, and dozens of other impressive structures, will be designing the set pieces for this performance.

Now entering its 15th season, Lucky Plush Productions is a Chicago-based dance theater company led by founder and Artistic Director Julia Rhoads. Lucky Plush is committed to provoking and supporting an immediacy of presence – a palpable liveness – shared by performers in real-time with audiences. The company is equally dedicated to creating work that is richly complex while also being broadly accessible. Critics and audiences alike recognize Lucky Plush for its complex choreography, moving content, surprising humor, and incisive commentary on contemporary culture.

This performance is made possible with support from The Andrew W. Mellon Foundation, Resident Company Collaboration Partner.

Grammy-nominated composer-pianist Vijay Iyer was described by Pitchfork as “one of the most interesting and vital young pianists in jazz today,” by the Los Angeles Weekly as “a boundless and deeply important young star,” and by Minnesota Public Radio as “an American treasure.” He was named DownBeat Magazine‘s 2014 Pianist of the Year, a 2013 MacArthur Fellow, and a 2012 Doris Duke Performing Artist. In 2014 he began a permanent appointment as the Franklin D. and Florence Rosenblatt Professor of the Arts in the Department of Music at Harvard University. Iyer will bring his electronic infused jazz to the Harris for the first time this year.

Since 2004 Circa has been at the frontier of new circus – creating powerful works of circus art that challenge, thrill and delight. Featuring an ensemble of multi-skilled circus artists under the direction of Yaron Lifschitz, Circa’s award-winning works have been seen in 33 countries across six continents. At the center of Circa is the art. Shows that push the boundary of the circus art form, blur the lines between movement, dance, theatre and circus and yet are a unique, singular ‘Circa’ experience.

Harris Theater for Music and Dance

The Harris Theater’s mission is to partner with a wide array of Chicago’s performing arts organizations supporting their initiatives for artistic growth and development. Its continuing efforts help build infrastructure and long-term sustainability for many of its resident companies.

Opened on November 8, 2003, the Harris Theater for Music and Dance was the first multi-use performing arts venue to be built in the Chicago downtown area since 1929. Today the Theater continues to host the most diverse offerings of any venue in Chicago, featuring the city’s world-renowned music and dance institutions and the Harris Theater Presents series of acclaimed national and international artists and ensembles.

Imagine: The Campaign for Harris Theater, is a $38.8M comprehensive fundraising effort supporting the Theater’s multifaceted mission. The campaign ensures the continued growth and artistic development of the Harris Theater over the next 10 years.

The Harris maintains a strong emphasis on community engagement through enrichment activities and their Access Tickets Program, in which the Harris Theater partners with health and human services agencies and community organizations to provide underwritten performance tickets for individuals facing illness, disability and challenging life circumstances. Since 2009, the Theater has provided over 8,800 tickets to children and families, representing 25 neighborhoods across the city of Chicago.

To learn more about the Harris Theater, please visit HarrisTheaterChicago.org. Call the Box Office at 312.334.7777 to request a brochure or additional information