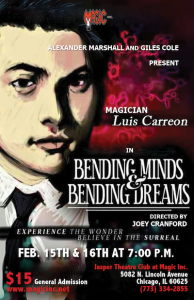 Luis Carreon, a Chicago-based magician, has announced two performances of his original solo show, Bending Minds and Bending Dreams, at one of the most renowned magic shops in the country, Magic Inc.

Bending Minds and Bending Dreams is an evening of modern magic and mentalism by award-winning master magician Luis Carreon, a recent semi-finalist on Tengo Talento (the Spanish language equivalent of America’s Got Talent). Carreon performs classic close-up parlor magic with a fresh twist, as well as his own original illusions with intense, dramatic elements and his penchant for the bizarre. With audience participation throughout, Carreon takes his audience on a journey through what magic is and what it can do, and ultimately, what dreams mean and how to follow them. Bending Minds and Bending Dreams is an exercise in watching the impossible unfold before your eyes, experiencing wonder, and learning to believe in the surreal.

Bending Minds & Bending Dreams is conceived and performed by Luis Carreon and is directed by Joseph Cranford.

About Luis Carreon
Magician and mentalist Luis Carreon recently won the Harlan Tarbell Close up Competition Award from the International Brotherhood of Magicians, took home 3rd place at the Chicago Magic Competition hosted by the Society of American Magicians, and is the head demonstrator at Magic Inc, the oldest family-owned magic shop in the country.  Carreon became interested in magic at the age of 10, inspired by his grandfather who was a clown with the Circo de los Hermanos Vazquez, a circus which toured all over South, Central and North America. Carreon received a small magic set at the age of 11, and from that moment on, his life changed. He became more intrigued with the art of magic with every passing day. After high school, he decided to take his magic and make it his profession. Carreon specializes in close-up card magic and parlor mentalism, and presents a unique blend of both. He has performed close-up magic for private parties, corporate events, and for celebrities such as Shakira and Jim Carrey, and in 2010, he performed platform magic for approximately 2,000 people at the Cicero Stadium. Carreon has performed his show Bending Minds and Bending Dreams at theaters around Chicago, has been featured on the Univision evening news, was a recent semi-finalist on Tengo Talento, the Spanish language equivalent of America’s Got Talent, and will be appearing on an upcoming episode of Sabado Gigante.

About Director Joseph Cranford
Chicago actor and director Joseph Cranford is making his magic-directing debut with Bending Minds and Bending Dreams, combining his love of magic with his stage expertise. Cranford has performed professionally with the national touring improv group Mission Improvable, multiple Harold teams at iO Chicago, and has been a guest improviser on the Second City ETC stage. His feature film debut can be seen in the summer of 2013 when he portrays a grown-up Pete Ross in the upcoming Man of Steel.