Griffin Finds Balance in SUNDAY IN THE PARK WITH GEORGE

Art isn’t easy.  In fact art and the artist are most complex as explored in Stephen Sondheim’s poignant 1984 musical Sunday In The Park with George.   This difficult and awkwardly structured piece is getting one of its most vibrant and truthful stagings to date at Chicago Shakespeare Theater thanks to Gary Griffin and his remarkable cast.   Sunday In The Park with George is one of those musicals that can create a great divide in the theater community between those who love it and those who hate it.  However, a remarkable thing happened on opening night that I have rarely seen in my many years as a critic; that is Mr. Griffin’s production was able to convert many of the established “haters” with his coherent and moving production.

For those that are not familiar, Sunday in the Park explores George Seurat’s creation of the masterwork “A Sunday Afternoon On The Isle Of La Grande Jatte”.   The project, which took two years to complete (1882-1884) is done in the style of pointillism, wherein Seurat creates the painting’s characters and objects through a series of dots that form a unified cohesive image in the viewer’s eye.    Act one shows the difficulty of the artist externalizing internal passion while Act Two turns the tables and shows how what happens when the external commercialization of art gets over-internalized.

As the musical opens, we see George in the park on a typical Sunday painting his lover Dot, who conveys her comfortableness in one of the best opening songs of any show.  As the famed painting is digitally created (and uncreated) before our eyes,  we are given a glimpse into the art of making art, the temperament of a great artist and the immense pain they can cause others by their inability to verbally communicate what is so natural for them to paint.   We see each of the characters of the painting come to life and get to see their backstories play out in interesting and at times laborious detail.   By the time the first act ends, the complex painting is complete, but at the ultimate of costs.   Dot leaves George for good and moves to the United States with her new lover and George’s infant daughter while George’s terminal cancer takes it’s victim at the age of 31. 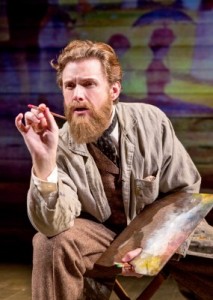 With Act Two we are brought to modern day Chicago, at the Art Institute where Seurat’s great grandson, another George, is showing his new laser sculpture.  Faced with the same type of criticism his great grandfather encountered  and in desperate need for inspiration and self value, George and his grandmother return to the Ilse of La Grand Jatte where Seurat had created his masterpiece 100 years earlier.  The visit leads both him and Marie to ponder their ideas of what is art, and what is life.  It is here that one of the most poinent songs ever written is sung, Children and Art, where it is implored upon us that these are the two greatest gifts a person can leave behind.

Though people always seem to equate the problems with Sunday In The Park With George to Mr. Sondheim, it is actually in James Lapine’s book that the issues arise.  Under developed characters in the book too often get over emphasized through Sondheim’s music and lyrics which creates an uneven through-line.    However, it is because of Gary Griffin, who can easily be ranked as one of the best director’s for a Sondheim show, that these scriptural problems are minimized.  Griffin’s direction allows Sondheim’s lyrics to rise front and center and move the story forward rather than the awkwardness of Lapine’s book. This is especially true in the second act when the book and the music collide and the result is a stalemate of storytelling.   Griffin lets his amazing cast lift Sondheim’s lyrics to new heights and with that, Sunday in the Park becomes something meta-theatrical.

Danieley (George Seurat & George) who have instant on-stage chemistry in the first act and then grow even closer in the second, playing different characters cut out of the same gene pool.   Heidi Kettenring (one of my favorite actresses of all time) once again proves her worth three times over as does a vocally powerful Michael Lindener.  Mr. Griffin’s ensemble (and this is truly an ensemble piece) is the crème de la crème of Chicago theatre, including McKinley Carter who is becoming a musical theater mainstay;  Ora Jones who is terrific as the sexually distracted nursemaid while Travis Taylor uses his booming baritone to full effect as the solider(s).

Just as important as Mr. Griffin’s stage sensibilities is Brad Haak’s visceral musical direction.  I have been touting Mr. Haak’s genius for years now and it has never been more apparent than in this production where the music, the musicians and the actor become seamlessly intertwined.

As in the 2008 Broadway revival, the art work plays a bigger part here than in the 1984 original. Kevin Depinet’s set design, Mike Tutaj’s projections and Philip S. Rosenberg’s lighting all work in perfect harmony recreating the original impressionistic piece as well as a fantastic laser sculpture.

What is so interesting about Sunday In The Park With George is that from the outside, many people may simply describe it as a musical about a painting.  However, it is so much more.  Like the impressionistic masterpiece itself, Sunday in the Park tells us to live our lives with balance.  For it is in that balance that we will find art itself.