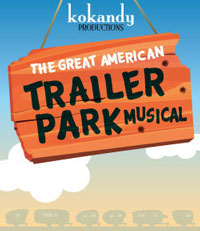 The Great American Trailer Park Musical has parked itself in Chicago.  The title says it all and reading too much into the show will do it an injustice.  It is just ninety minutes of mindless entertainment saved by a very talented cast.  The plot revolves around the lives of the inhabitants of Armadillo Acres, a trailer park community where each one of the neighbors is akin to Gladys Kravits.   The plot is as simple as the intellect of the park’s inhabitants.  A slut, Pippi (Bri Schumacher) moves in to an adjacent trailer, has a torrid affair with a married man Norbert (Jonathan Hickerson) which is soon discovered by his agoraphobic wife, Jeannie (Christina Hall) on her first outing in many years, thereby disrupting the dysfunctional happiness of this community.  Each of the characters are given a modest back story and scripturally have some great moments, but with this production it really doesn’t matter as the cast assembled by director John D. Glover is so far superior to the material that you loose yourself with the fun they are having on stage.

‘Trailer Park’ was first produced for the New York Theatre Festival in 2004 then opened at Dodger Stages (where Bare was supposed to as well), with the magnificent Leslie Kritzer in the original cast.  [Of note, in 2009 the Nashville production did a series of promotional internet “webisodes” to high acclaim which followed the characters receiving the internet into trailers]. 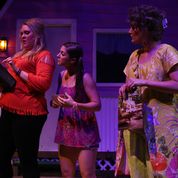 For this production, some cuts have been made allowing the show to be intermission-less.  The songs are still overly long and the script defaults many times to the benign but again the cast exceeds in every way.  The harmonies are spot-on and their comic timing is as good as anySecondCityshow.     Bri Schumacher as Pippi vocally dominates each song she sings with great ease.  As for the boys, Jonathan Hickerson (Norbert) and Alex Grelle (Duke) provide the perfect fodder for our ladies to have dominion.

The score by David Nehls is contains no memorable songs and borrows very heavily from more popular shows such as Little Shop of Horrors and Pump Boys and Dinettes.  This lack of originality in music and lyrics is somewhat saved by Betsy Kelso’s book which is now paced at a rip-roaring speed. 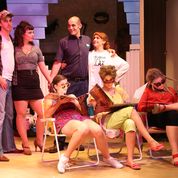 The Great American Trailer Park Musical is a fun evening out but maybe better suited to a late-night venue rather than a traditional theatre space and time.  As we are soon to get into the prime theatre season, I’m sure this show will quickly fade in our collective memories.  But for today, Mr. Kokandy has given us an hour and a half to forget about our troubled world and just laugh.  Sometimes, that is the best theatre of all.