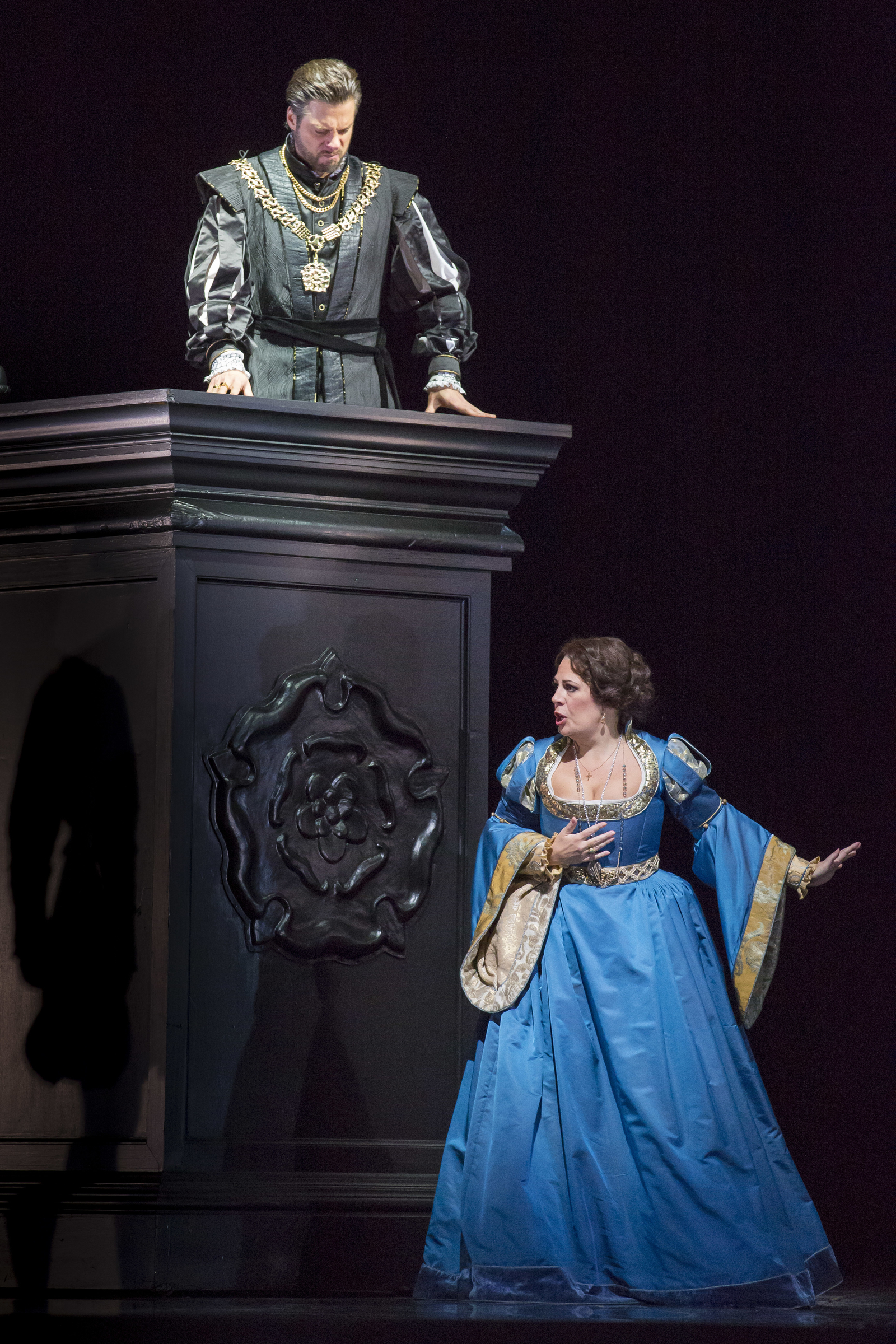 Donizetti’s Anna Bolena originally premiered on December 26th, 1830 at La Scala in Italy with who is considered to be the first “acting” soprano Giuditta Pasta in the title role (he also created La sonnambula and Norma for her). Labelled one of the most formidable prima donna roles in Bel Canto the contralto who tackles this role sings almost continually for close to 3 hours and must have the acting chops as well as an extraordinary vocal ability.

For this challenging role the Lyric has cast Sondra Radvanovsky as Anna Bolena (Anne Boleyn) and she is nothing short of phenomenal. With hints of Maria Callas (who actually reintroduced this great opera to a 20th century audience) Radvanovsky portrays the harrowing downfall of Henry VIII’s best known Queen and dominates the stage for 3 hours (she remarked that if she had performed the roll well after curtain call she went home to be totally exhausted).

Anna Bolena begins with the miscarriage or Anne’s last child (a male heir) with the powerful and tyrannical King Henry VIII (sung by the hunky and handsome bass John Relyea) and his new infatuation with who would become his next wife, Jane Seymour (although not physically right for the role but sung magnificently by soprano Jamie Barton) who actually bore his male heir who became Edward NUMBER. Henry needs to find a way to rid himself of Anne since she cannot provide an heir therefore he manufactures the infidelity against Anne with three men, Lute Player Mark Smeton (sung very well by Kelly O’Connor), her true love returned from exile, Lord Richard Percy (a tour de force performance by tenor Bryan Hymel) and her brother, Lord Rochford (Richard Ollarsaba) that would bring her to the scaffold.

With Lyric the voice always the primary factor and with this cast they have produced one of the most beautifully sung operas that I have seen them do in years. One of the most powerful scenes of the opera occur in Act 2 when Jane and Anna sing the beautiful and passionate duet Dal mio cor punita io sono where Jane reveals to Anna that she is the other woman who has stolen Henry’s heart. Anna flies into a rage and seeing the devastation in Jane’s heart forgives her. The two voices of these women complement each other so well that we see firsthand the importance of vocal pairings in opera. Both have tremendous vocal dexterity and handle the fiendishly difficult bel canto (translated as “beautiful singing”) in such a way as to make it fresh and exciting.

Under the baton of Patrick Summers Lyric’s orchestra is world-class and plays Donizetti’s gorgeous score magnificently.

The scenic design for this production is not only highly functional but ingeniously designed by someone from the theatre, the very talented Neil Patel. Comprised largely of a ceiling with surprises that come out of it the action of the piece is never sacrificed in clumsy, clunky set changes and, while imposing, it never distracts from the singers. It is a refreshing highlight of the production and, for Lyric, one of the best designed sets they have presented for a very long time.

I wish I could give Jessica Jahn’s costumes similar praise but they were dreary, highly under-designed for this era of opulence and did not match the splendor of Patel’s set (it looked like they had been pulled and assembled). The color palate consisted mostly of grey, light blue or black and I found it interesting that Henry’s male courtiers went hunting in their religious garb (this could have been a choice of director Kevin Newberry) of that this took place in a monastery. The women’s clothes had little to no adornment and Anna, Henry and Jane seemed they could only afford one costume which they wore throughout the entire opera (I felt sorry that Henry had such a poor court).

But that aside I strongly recommend that you take a trip to the Lyric to see masterful singing and witness the truly breathtaking performance of one of the great sopranos of the modern stage, Sondra Radvanovsky as Henry’s doomed Queen. She is riveting.