GOODMAN’S ROCHE SCHULFE TO BE HONORED ON THE “WALKWAY OF STARS” ON SEPTEMBER 4, AND AT THE SEPTEMBER 24 SEASON OPENING CELEBRATION 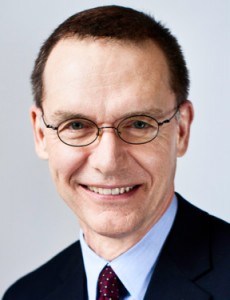 Lifelong Chicagoan Roche Edward Schulfer’s 40 years of distinguished service to Goodman Theatre—a rarely-exceeded tenure at a single American theater—will be celebrated with a star on the “Walkway of Stars” beneath the iconic Goodman marquee, and at the 2013/2014 Season Opening Celebration on September 24. One of the most respected theater producers in the country, Schulfer has been central to the Goodman’s emergence as a major cultural institution and leading U.S. theater. He began his theater career in the Goodman’s box office in 1973, and quickly rose through the ranks; he currently serves as Goodman Theatre’s Executive Director (a position he has held since 1980) and, with Artistic Director Robert Falls, shares a 27-year producing partnership—one of the longest in the industry. Schulfer has overseen the production of close to 350 plays (including 125 world or American premieres), has negotiated the presentation of Goodman productions at national and international venues and established Charles Dickens’ classic tale A Christmas Carol as an annual Chicago holiday tradition (marking its 36th production this season). He coordinated the development of the $46 million new Goodman Theatre complex from 1998 – 2000, which served as a catalyst for Chicago’s Theater District. In honor of Schulfer’s milestone anniversary, the Goodman’s Boards, artists, staff and friends contributed more than $1 million in special gifts, bringing the $15 million Endowing Excellence Campaign near completion. Schulfer’s star will be unveiled on September 4 at 11am.

“On behalf of the City of Chicago, I congratulate Roche Schulfer on four decades of leadership of Goodman Theatre,” said Mayor Rahm Emanuel. “Roche’s efforts at the Goodman have helped Chicago earn our reputation as a global destination for theater, and his visionary leadership has transformed the Goodman and introduced theater to thousands across our City. I congratulate Roche on this milestone achievement.”

During the leadership of Schulfer and Falls, the Goodman’s attendance has averaged 90% capacity; sales revenue has grown from $2.5 million to $11.5 million; and public support has grown from $2 million to $6.6 million. Under their leadership, the theater has made community engagement a core value of the institution, establishing a diverse array of youth and lifelong learning programs. The Goodman has received numerous awards and accolades for excellence, including the Pulitzer Prize for Ruined by Lynn Nottage (2009); “Best Regional Theater in the United States” by Time magazine (2003); the Tony Award for Outstanding Regional Theater (1992); and numerous Joseph Jefferson awards for outstanding achievement in Chicago-area theater. Schulfer is a founder and two-time chairman of the League of Chicago Theatres and a founding member, past chair and current board member of Arts Alliance Illinois. “Schulfer’s love for the theater is palpable, but his business skills have made the difference in what his loyalists believe is the Goodman’s very existence” (Chicago Sun-Times).

“As the current Goodman Theatre Chair and on behalf of those who have preceded me in this role, it is a privilege to work with Roche Schulfer—a charismatic arts advocate with remarkable business acumen whose leadership led to the establishment of quality, diversity and community as the core values of the Goodman,” said Ruth Ann M. Gillis, Executive Vice President and Chief Administrative Officer, Exelon Corporation, and President, Exelon Business Services Co. “Roche has championed cultural diversity and gender equality on and off the stage, and his entrepreneurial and strategic initiatives have made theater accessible to all.”

Theater management as a career evolved during the 1960s and 1970s, after the founding of the National Endowment for the Arts (NEA) and the rise of both public and private funding for the arts.

“Roche is among the early trailblazers of this work, and has set a towering and inspiring example for the field,” said Teresa Eyring, Executive Director of Theatre Communications Group (TCG), the national service organization for more than 450 not-for-profit theaters. “He is one of the only practitioners in the American theater field who has been elected to multiple separate terms on TCG’s board over the last three decades, and is deeply respected by his peers and by emerging leaders—who literally soak up his wisdom. As a producer, Roche is well known for his fiscal brilliance, but he is also a tremendous advocate for artists—helping to ensure that artists have a home at the Goodman, and that the wider community is aware of the challenges faced by freelance theater artists. He has also been a committed, consistent presence at the national level advocating for the entire performing arts sector.

Following Schulfer’s graduation from the University of Notre Dame with a degree in Economics, he was hired on September 4, 1973 as a Box Office Attendant at Goodman Theatre under then-Artistic Director William Woodman (at the Goodman’s previous 200 S. Columbus Drive location). He was promoted to Assistant to the Managing Director in 1974 (under Managing Director John Economos); General Manager in 1977 (working with Managing Director Janet Wade) and was named Managing Director in 1980, working with then-Artistic Director Gregory Mosher. From 1974 to 1983, Schulfer produced the works in Goodman Stage 2, which became a force in the growth of Chicago theater through premieres of David Mamet’s American Buffalo, A Life in the Theatre, Edmond and Glengarry Glen Ross. He also worked with Mosher to make Goodman productions more representative of the diverse Chicago community through new programming, casting and marketing strategies. In addition, in 1976, he founded the off-Loop Producers Association—the predecessor of the League of Chicago Theatres.

“There simply is no better, smarter or more generous collaborator in the American theater than Roche Schulfer,” said Artistic Director Robert Falls. “An enormously gifted producer and shrewd business strategist, he has shepherded productions like Death of A Salesman, Desire Under the Elms and Chinglish to theaters on Broadway and beyond. Roche is also a thoughtful, caring leader who has promoted diversity, inclusion and support for theater workers fighting HIV/AIDS, consulted with many emerging theater companies and mentored countless young professionals—including many outstanding leaders in the Chicago and national theater community.”

One such leader, Rachel Kraft, worked for 12 years at the Goodman under Schulfer prior to becoming Executive Director for Chicago’s celebrated Lookingglass Theatre. “When Roche hired me to be the Director of Development for Goodman Theatre, I had only been working there for six months and was still very green in the field. He explained my promotion to the board as ‘we hire people, not resumes’—which not only reinforced his confidence in my work, but in me as a person. His philosophy informed every hire I’ve made since, and I know that it was his investment in me that directly led to my current position,” said Kraft.

In addition to his work with TCG, Schulfer has served in leadership roles with the Performing Arts Alliance (the national advocacy consortium of more than 18,000 organizations and individuals); the League of Resident Theatres (the management association of 65 leading US theater companies); and Lifeline Theatre of Rogers Park. He has been recognized by Actors’ Equity Association for promoting diversity and equal opportunity in Chicago theater; the American Arts Alliance for national arts advocacy leadership; the Arts & Business Council for distinguished contributions to Chicago’s artistic vitality for more than 25 years; Chicago magazine and the Chicago Tribune as a “Chicagoan of the Year”; the City of Chicago; Columbia College Chicago for entrepreneurial leadership; Arts Alliance Illinois for state and local advocacy leadership; the Joseph Jefferson Awards Committee for his partnership with Falls; North Central College with an Honorary Doctor of Fine Arts degree; Lawyers for the Creative Arts; Lifeline Theatre’s Raymond R. Snyder Award for Commitment to the Arts; Season of Concern for support of direct care for those living with HIV/AIDS; and the Vision 2020 Equality in Action Medal for promoting gender equality and diversity in the workplace. He is a longtime adjunct professor at DePaul University, helping to nurture the next generation of theater professionals. He is married to the distinguished actor Mary Beth Fisher.