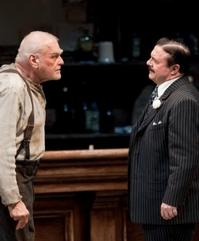 Artistic DirectorRobert Falls’ major revival of Eugene O’Neill’s nearly five-hour, 18-character epic broke box office records and played to 100% of capacity at the Goodman—officially concluding its 50-performance extended run as the most successful show in the Goodman’s 87-year history.

Audiences numbered more than 42,000 Goodman Subscribers and ticket buyers—30% of whom attended the Goodman for the first time—and visitors from 46 states and eight countries, including far-reaching destinations such as Sydney, Australia; Hong Kong, China; Rome, Italy; Cape Town, South Africa; and Alberta, Canada. The production, featuring “as many great performances as I’ve seen in a single show for years” (The New York Times) promptedThe Wall Street Journal to hail “no matter how far you have to go to get there, the place to be right now is Chicago, whereNathan LaneandBrian Dennehyare starring inRobert Falls’ revival of The Iceman Cometh.” With six performances per week, The Iceman Cometh ran April 21 – June 17, 2012 atGoodman Theatre; no future productions are planned at this time.

“I congratulateGoodman Theatreon their record-breaking production of The Iceman Cometh,” said MayorRahm Emanuel. “Whether downtown or in our neighborhoods, Chicago’s diverse and dynamic cultural institutions showcase creativity and create economic vitality throughout our City. The Goodman continues to be an anchor of our city’s cultural life, providing stunning renditions of classical pieces, as well as a cutting edge glimpse into theater’s future.”

DirectorRobert Falls, one of America’s leading interpreters of Eugene O’Neill, marked his seventh O’Neill production with The Iceman Cometh. Previous credits include The Iceman Cometh (1990 and a 1992 revival atTheAbbey Theatre’s 33rd annual Dublin Theatre Festival); A Touch of the Poet (1996); Long Day’s Journey into Night (2002 and on Broadway), Hughie (2004), Desire Under the Elms (2009 and on Broadway) and the double-bill of Hughie/Krapp’s Last Tape (2010).

“I am enormously proud of what Nathan, Brian and our brilliant ensemble cast have achieved with this once-in-a-lifetime experience that is certainly one of the highlights of my life in the theater,” said Artistic DirectorRobert Falls. “None of it would have been possible without an extraordinary team of people—from our creative team, stage managers, crew and staff, to our generous sponsors, incredible audiences and the local and national media. We share and celebrate this success.”

Said Nathan Lane, “I will be forever grateful to everyone at the incomparableGoodman Theatrefor all their hard work; to the great Bob Falls and his brilliant design team for a beautiful, profound, and revelatory production, to the most extraordinary and talented group of actors I’ve ever encountered—it was a privilege to share the stage with them every night—and of course, to the one-of-a-kind Chicago audiences, who have the guts, stamina and intelligence for a five-hour evening ofEugene O’Neill’s rarely seen masterpiece. It was, without question, the high point of my theatrical career, an unforgettable and life-changing experience. And finally, a special thanks to my old friendBrian Dennehy, who not only gave a magnificent performance as Larry Slade, but was an incredibly loving and supportive mentor to me throughout the entire run. But really, let’s hear it one more time for portrayal of one-time Syndicalist anarchist Larry Slade, the Chicago Tribune said, “you see the singular relationship between this huge onstage persona and this director, writ large on the O’Neill canvas.” In a performance “by turns sardonic, mournful and filled with a terrifying rage, Dennehy undertakes an evening-long struggle with himself that’s riveting to watch” (Time Out Chicago).

Said Brian Dennehy, “Of all of my great experiences in Chicago theater, this ranks up there as the most fun and the most successful. The fact that an almost a 5-hour production of O’Neill sold out completely shows just how hungry Chicago audiences are for good, demanding theater. Amazing direction by Bob Falls, a fantastic cast lead by the incomparableNathan Lane—an old friend and an actor who should now explore the rest of the O’Neill canon. And I also want to thankRoche Schulfer, a guy who rarely gets credit for these kinds of things, who’s done an incredible job administrating the Goodman and its productions for so many years. Thanks to you, too.”

Allstate Insurance Company was the Lead Corporate Sponsor of The Iceman Cometh.

“Allstate is proud to have sponsored The Iceman Cometh, and congratulatesGoodman Theatreon its incredible success,” said Patty VanLammeren, Senior Vice President of Allstate. “Our hands offer a resounding round of applause!”