Goodman Theatre’s THE MATCHMAKER Is A Masterpiece 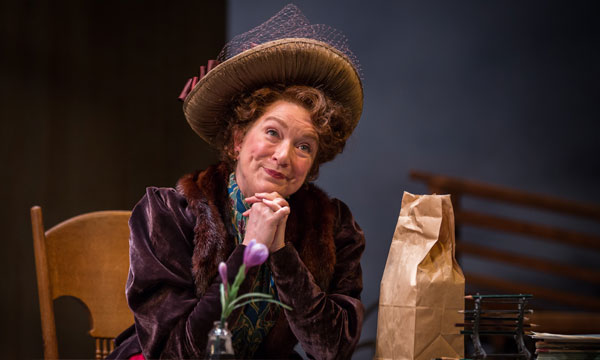 The Goodman Theatre’s “The Matchmaker,” a romantic farce directed by Henry Wishcamper, follows love liaison Dolly Gallagher Levi (Tony Award Nominee Kristine Nielsen) who plans to match herself with wealthy widower Horace Vandergelder (Allen Gilmore). Vandergelder has retained Dolly’s services to find him a suitable mate, and she takes every opportunity to secure her place by his side. The show is funny and joyous with witty monologues and great female characters for the period.

Originally produced in the 1950s, Wilder’s comedy offered some valuable lessons on life, love and the ramifications of class divisions – themes still relevant to the contemporary world. This delightful version is rich with diversity and brings together a sensational cast which includes a transgender actor, several actors of color, and one actress with a disability. The play itself is inherently optimistic but mixed with a slightly dark underlying theme of desperation – some desperate to marry the one they love, some to fall in love, while others look to the future with only dollar signs in their eyes. Wilder was the most self-conscious of playwrights, and his intention to break down the fourth wall by periodically having his characters confide in us shows his versatility as a playwright. From Our Town to The Matchmaker, he never disappoints. The soliloquies are beautifully presented and work well because each element has so much conviction behind it. With inventive transitions, powerful acting, and gorgeous romantic sets (designed by Neil Patel), this show is not to be missed.

March 5 – April 10, 2016 In the Albert at The Goodman Theatre. For tickets visit https://www.goodmantheatre.org/matchmaker
Approximate running time: 2 hours and 40 minutes with one intermission. The Matchmaker is recommended for audiences age 12 and older