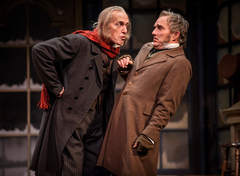 Something really hit me this year watching the Goodman Theatre's superior ‘A Christmas Carol'; that being how needed and relevant Dickens' classic remains, especially in light of so many people's financial plight. It was if a mirror was being held up to our society. Ebenezer Scrooge, was after all, a money lender, who with a stroke of his pen, effected peoples lives. Who deserves a loan, who doesn't, terms of repayment plays like a modern day life lesson. For that reason, the power of Scrooge's redemption resonates.

Whether you are seeing ‘A Christmas Carol' for the first time or your fiftieth, there is something soothing and reassuring in watching the decent and accent of the human spirit. Of course, the stellar Larry Yando as our grumpy Ebenezer gives this work its weight in gold. There is a huge breath and brevity to his performance

which dominates every scene he is in. Director Steve Scott adheres to Goodman's reputation of color blind casting for ‘Carol' and as usual, assembles a fantastic ensemble.   This year, many cast members return, such as Elizabeth Ledo as the Ghost of Christmas Past;  And there are some new additions, including the effervescent Michael Aaron Lindener taking over from Ross Lehman, as Mr. Fezziwig.

After 35 years Goodman's production is widely considered the grandfather of all Christmas Carol's in the country. For good reason, as even though it has the highest of production values in sets, lighting, illusions, it is the grounded core of the script that keeps Goodman's ‘Carol' seemingly new each year. There is no turning away from the dark aspects of the story here. A tortured soul more embittered as it ages, the death of a child, the morality of human kindness is never shunned at this production. But what resonates throughout the decades with this story is the chance to make things right and not to waste an opportunity to make a difference in someone's life. That is the lesson here and it the lesson of life itself.