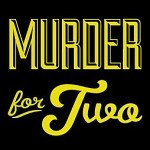 Ghostlight Records will release the original cast recording of the hit new musical comedy MURDER FOR TWO in early 2014.MURDER FOR TWO which was a hit at Second Stage before transferring to New World Stages, was called “a charmingly frenetic all-stops out musical comedy” by Entertainment Weekly, and has already extended its run through March 16, 2014. The album will be produced by Joel Moss with Kurt Deutsch serving as executive producer. Sign up to pre-order at www.sh-k-boom.com/murderfortwo.

Everyone is a suspect in MURDER FOR TWO, a hilarious musical murder mystery with a twist: one actor (Brett Ryback) investigates the crime, the other plays all of the suspects (Jeff Blumenkrantz) and they both play the piano! A zany blend of classic musical comedy and madcap mystery, this 90-minute whodunit is a highly theatrical duet loaded with killer laughs. MURDER FOR TWO features book and music by Joe Kinosian, book and lyrics byKellen Blair and direction by Scott Schwartz.

MURDER FOR TWO began previews at Second Stage Theatre’s uptown home, the McGinn/Cazale Theatre on Wednesday, July 10th and officially openedThursday, July 25th. It was extended twice, due to popular demand, and ultimately played there through Sunday, August 25th.

MURDER FOR TWO was developed at The Adirondack Theatre Festival and 42nd Street Moon. Chicago Shakespeare Theater presented the World Premiere Production in May, 2011, which was extended 4 times, running for more than 6 months. Kinosian and Blair were recognized with a 2011 Joseph Jefferson Award for Best New Musical.

Sh-K-Boom with its imprint Ghostlight Records has become the leading independent force in Original Broadway Cast Recordings – building a library of over 130 records in the last 13 years, featuring the most successful Broadway musicals and solo albums by Broadway’s biggest stars. Ghostlight recently won the Grammy Award for The Book of Mormon, and released the OBCR of Newsies, the premiere recording of Carrie, the new Grammy-nominated cast recording of Anything Goes, plus the OCRs Catch Me If You Can, Sister Act and Women on the Verge of a Nervous Breakdown, as well as solo albums from some of Broadway’s biggest stars: Sutton Foster, Kelli O’Hara, Alice Ripley, Christine Ebersole, Melissa Errico and Ben Vereen. Other titles on Ghostlight include the Grammy Award-winning In the Heights, plus Next to Normal, Hair, Legally Blonde, Everyday Rapture, Passing Strange, Dirty Rotten Scoundrels, The 25th Annual Putnam County Spelling Bee and The Drowsy Chaperone. www.sh-k-boom.com.