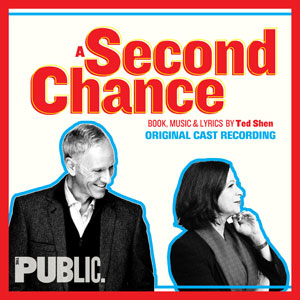 Ghostlight Records will release the original cast recording of The Public Theater’s production of A SECOND CHANCE online and in stores August 5. The show has music, lyrics and book by Ted Shen and was directed by Jonathan Butterell. A SECOND CHANCE features performances by real-life husband and wife Brian Sutherland (Dan) and Diane Sutherland (Jenna). The album track “I Can’t Wait” is currently available to stream at www.sh-k-boom.com.

A stirring musical journey, A SECOND CHANCE tells the New York story of a recent widower and a divorcée who meet in mid-life and mid-crisis. Presented with the overwhelming challenge of freeing themselves from their painful pasts, neither feels deserving of happiness. Yet, the awakening of unanticipated feelings leads them to a possibility they both least expected to find.

A SECOND CHANCE – which was performed as a limited engagement at The Public Theater in New York City from March 18 through April 14, 2014 – featured scenic design by Robert Brill, costume design by Susan Hilferty, lighting design by Jen Schriever, sound design by Jonathan Deans, projections by Rocco DiSanti, and music direction by Zak Sandler.

TED SHEN (Book, Music, and Lyrics). A Second Chance marks Mr. Shen’s debut as a musical theater writer. Mr. Shen retired from a 30-year business career in 1999 to return to his music roots developed as a jazz musician in high school and college. He studied songwriting with Ricky Ian Gordon from 2001 to 2003 and redirected The Shen Family Foundation, which he oversees with his wife, Mary Jo, to foster the work of exceptionally gifted and original musical theater composers as well as to establish the Shen Musical Theater Curriculum at Yale University. In 2008, he began writing A Second Chance, which was presented in concert version at Joe’s Pub in 2010 and given its world premiere at Signature Theatre, Arlington, VA, in 2011.

JONATHAN BUTTERELL (Director) directed the world premiere of A Second Chance at Signature Theatre. For The Public he directed the 50th Anniversary Public Sings! and his recent credits include Whida Peru; Resurrection Tangle; Tres Niñas featuring Victoria Clark; musical staging for the Tony Award-winning The Light in the Piazzaand the Tony Award-winning Assassins. He also choreographed the Tony Award-winning Nine revival, starring Antonio Banderas and Chita Rivera. His additional Broadway credits include the new musical staging for the revival of Fiddler On The Roof; musical staging for the original workshop of Sondheim’s Wise Guys at NYTW; and choreography for A Man Of No Importance at LCT. His credits in the UK include directing Stiles & Drewe’s Soho Cinders; Company (dir. Sam Mendes, West End transfer); Habeas Corpus; and Into The Woods, co-directed with John Crowley at the Donmar Warehouse, He devised and directed Michael Ball in Alone Together, and Divas at the Donmar, also at the Royal Haymarket Theatre; co-directed Sweeney Todd with David McVicker for the Opera North/Sadlers Wells; co-directed Peter Pan with Julia McKenzie at the Royal Festival Hall; musical staging Sondheim’s Passion. His additional International credits include The Sound Of Music (Opera Theatre, Buenos Aires); Orpheus Descending, Strindberg’s Creditors (Theatre Project Tokyo).

ABOUT THE PUBLIC THEATER AT ASTOR PLACE

Under the leadership of Artistic Director Oskar Eustis and Executive Director Patrick Willingham, The Public Theater is the only theater in New York that produces Shakespeare, the classics, musicals, contemporary and experimental pieces in equal measure. The Public continues the work of its visionary founder, Joe Papp, by acting as an advocate for the theater as an essential cultural force, and leading and framing dialogue on some of the most important issues of our day. Creating theater for one of the largest and most diverse audience bases in New York City for nearly 60 years, today the Company engages audiences in a variety of venues—including its landmark downtown home at Astor Place, which houses five theaters and Joe’s Pub; the Delacorte Theater in Central Park, home to its beloved, free Shakespeare in the Park; and the Mobile Unit, which tours Shakespearean productions for underserved audiences throughout New York City’s five boroughs. The Public’s wide range of programming includes free Shakespeare in the Park, the bedrock of the Company’s dedication to making theater accessible to all; Public Works, a new initiative that is designed to cultivate new connections and new models of engagement with artists, audiences and the community each year; new and experimental stagings at The Public at Astor Place, including Public Lab; and a range of artist and audience development initiatives including its Public Forum series, which brings together theater artists and professionals from a variety of disciplines for discussions that shed light on social issues explored in Public productions. The Public Theater is located on property owned by the City of New York and receives annual support from the New York City Department of Cultural Affairs; and in October 2012 the landmark building downtown at Astor Place was revitalized to physically manifest the Company’s core mission of sparking new dialogues and increasing accessibility for artists and audiences, by dramatically opening up the building to the street and community, and transforming the lobby into a public piazza for artists, students, and audiences. Key elements of the revitalization included infrastructure updates to the 158-year old building, as well as construction of new exterior entry stair and glass canopy; installation of ramps for improved accessibility; an expanded and refurbished lobby; the addition of a mezzanine level with a new restaurant lounge, The Library at The Public, designed by the Rockwell Group. The LuEsther T. Mertz Charitable Trust provides leadership support for The Public Theater’s year-round activities. www.publictheater.org

Sh-K-Boom with its imprint Ghostlight Records has become the leading independent force in Original Broadway Cast Recordings – building a library of over 130 records in the last 13 years, featuring the most successful Broadway musicals and solo albums by Broadway’s brightest stars. Founded by Kurt Deutsch and Sherie Rene Scott, Ghostlight has won two Grammy Awards (for The Book of Mormon and In the Heights) and is a frequent nominee, most recently for the OBCR of Disney’s Newsies and new cast recording of Anything Goes. Other notable recent releases include Pippin, Rodgers + Hammerstein’s Cinderella and Hands on a Hardbody, plus The Last Five Years, Giant, Dogfight, Natasha, Pierre and the Great Comet of 1812 and the premiere recording of Carrie. The label has also released solo albums from some of Broadway’s biggest names: Sutton Foster, Kelli O’Hara, Alice Ripley, Christine Ebersole, Melissa Errico and Ben Vereen. Additional titles on Ghostlight include Next to Normal, Hair, Legally Blonde, Everyday Rapture, Passing Strange, Dirty Rotten Scoundrels, The 25th Annual Putnam County Spelling Bee and The Drowsy Chaperone. Sh-K-Boom Entertainment is a producer of the upcoming film version ofThe Last Five Years, written and directed by Richard LaGravenese and starring Anna Kendrick and Jeremy Jordan. It is expected for release this year. www.sh-k-boom.com.