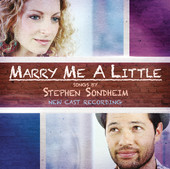 Ghostlight Records has announced the release of MARRY ME A LITTLE – the New Cast Recording. The album, based on the recent hit production by The Keen Company and featuring the songs of Stephen Sondheim, stars Lauren Molina and Jason Tam.  MARRY ME A LITTLE will be available from digital outlets on September 24 and the disc will be in stores on November 19. For updates on the album, please visit www.sh-k-boom.com/marrymealittle.html.

MARRY ME A LITTLE was conceived by Craig Lucas and Norman René, and directed by Keen Artistic Director Jonathan Silverstein. The production was nominated for a 2013 Drama League Award for Outstanding Musical Revival.

The album is produced by Joel Moss, with Kurt Deutsch serving as Executive Producer.  The Musical Director is John Bell.

Weaving together several rarely-heard Sondheim songs, MARRY ME A LITTLE tells the charming and bittersweet tale of love, loneliness and survival of modern singles.  Two strangers, left alone in their studio apartments on a Saturday night, pass their time with sweetly secret, shared fantasies, never knowing that they’re just a floor away from each other and the end of their lonely dreams.

David Rooney in The New York Times said of this production: “No living Broadway composer’s gifts have been more celebrated than Mr. Sondheim’s. But it’s a testament to his skills that the discards and remnants from which this show was stitched are more beguiling than so much of what passes for contemporary musical theater.”

“All praise, then, to the Keen Company, a deservedly admired off-Broadway troupe, for reviving MARRY ME A LITTLE, which hasn’t been seen in New York since 1987, and showing the big boys how to do it right.  Short, smart and sweet!” declared Terry Teachout in The Wall Street Journal.

This recording contains material from Sondheim’s catalogue that was added to MARRY ME A LITTLE for the first time as part of this production:  “Ah,But Underneath” (written for the London premiere of Follies), replacing “Uptown, Downtown” and “If You Can Find Me, I’m Here” (Evening Primrose) replacing “Pour Le Sport,” as well as “Bring on the Girls” (from Follies). The score also features “Saturday Night,” “So Many People,” “A Moment With You” (from Saturday Night), “Bang!,” “Silly People”  (cut from A Little Night Music), “Can That Boy Foxtrot!,” “All Things Bright and Beautiful,” “It Wasn’t Meant to Happen,” “Little White House,”  “Who Could Be Blue?”  (cut from Follies), “The Girls of Summer” (from The Girls of Summer), “Your Eyes Are Blue” (cut from A Funny Thing Happened on the Way to the Forum), “Marry Me A Little,” “Happily Ever After” (cut from Company), and “There Won’t Be Trumpets” (cut from Anyone Can Whistle).

3. Can That Boy Foxtrot!

4. Bring On The Girls

6. The Girls of Summer

8. Who Could Be Blue? / Little White House

15. There Won’t Be Trumpets

Sh-K-Boom with its imprint Ghostlight Records has become the leading independent force in Original Broadway Cast Recordings – building a library of over 130 records in the last 13 years, featuring the most successful Broadway musicals and solo albums by Broadway’s biggest stars. Ghostlight recently won the Grammy Award for The Book of Mormon, and released the OBCR of Newsies, the premiere recording of Carrie, the new Grammy-nominated cast recording of Anything Goes, plus the OCRs Catch Me If You Can, Sister Act and Women on the Verge of a Nervous Breakdown, as well as solo albums from some of Broadway’s biggest stars: Sutton Foster, Kelli O’Hara, Alice Ripley, Christine Ebersole, Melissa Errico and Ben Vereen. Other titles on Ghostlight include the Grammy Award-winning In the Heights, plus Next to Normal, Hair, Legally Blonde, Everyday Rapture, Passing Strange, Dirty Rotten Scoundrels, The 25th Annual Putnam County Spelling Bee and The Drowsy Chaperone. www.sh-k-boom.com.