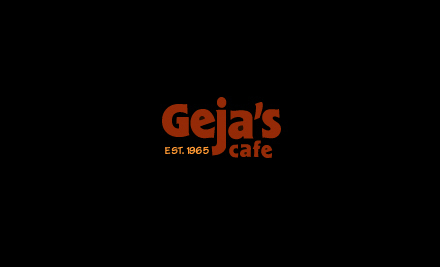 Chicago’s most romantic restaurant, Geja’s Café, 340 West Armitage, will save feuding couples all over the city by encouraging them to forgive each other on National Kiss and Make Up Day, Tuesday, August 25. That day, couples dining at Geja’s to “Kiss and Make Up” will each enjoy a complimentary glass of champagne with the purchase of two premiere dinners. Voted as one of the “Top 10 Places to Kiss in Chicago” by HoneymooninChicago.com, an unofficial Geja’s “house rule” has always been that anyone who loses food from their fondue fork in the pot must kiss their date, and this “rule” will be strongly in effect at Geja’s Cafe that evening.

“Geja’s Café has been the site of 137,135 first dates and 16,254 engagements in its 50 year history,” says owner Jeff Lawler. “Kissing over chocolate fondue and champagne bubbles will swell any heart with forgiveness.”

Named one of the best restaurants in the country for exceptional fondue by the Wall Street Journal, and an ideal destination to celebrate an anniversary by The New York Times, Geja’s Café’s significance spans nationwide. John Davis founded Geja’s Café in 1965 on Wells Street in Chicago’s Old Town neighborhood. For six years, Geja’s operated in that location, serving as a Bohemian enclave for artists and writers. In 1969, Davis began the Geja’s Wine Society, one of the nation’s oldest tasting groups, and the restaurant began to be known as Chicago’s first “wine bar.” In need of additional seating, Davis relocated Geja’s to its current Armitage Avenue location in 1971, where the restaurant continues to thrive. The original 1965 bar and many of the fixtures are still a part of Geja’s charming atmosphere. Today, Geja’s Cafe continues to be voted “Chicago’s Most Romantic Restaurant” by numerous local and national publications. In 1993, CNN featured Geja’s as the “Best Fondue Dining” in North America. In 2008, Food Network Channel featured Geja’s as the Ultimate Romantic Dipping Place in North America and in 2010 Geja’s was named one of America’s 50 Most Romantic Restaurants by OpenTable.

Known for romantic fondue dining – food one prepares and shares – and an extensive list of fine, moderately priced wines, Geja’s Café features over 20 different types of fondue entrees including cheese fondue and chocolate dessert fondue.  An enchanting wine cellar atmosphere, private booths, and subdued lighting contribute to its intimate surroundings.  Geja’s Café was recently voted the #1 audience winner for Best Romantic Dining in Chicago on www.CitySearch.com. The Chicago institution has been the site of 137,000 first dates and 16,254 engagements and diners have enjoyed over 312 tons of cheese fondue and over 933,100 bottles of wine in Geja’s fifty year history.