GABRIELLE STRAVELLI – the celebrated pop/jazz vocalist and songwriter called an “outstanding singer” by The Wall Street Journaland “hotter than the equator” by The Village Voice – will release Dream Ago, her first major recording in a quickly rising career. The album, which will be available January 27, 2017 from the Big Modern Music label, presents a joyous new voice of flexibility and range. After years as an emerging sensation in New York’s jazz and supper clubs, she is poised to break out to a wider audience and national attention with this recording. Following two well-received collections of pop songs and standards, Dream Ago isa compelling and diverse showcase for her supple voice, strong interpretations and original compositions. The album is produced by David Cook (Taylor Swift, Jennifer Hudson, Marianne Faithfull), arranged by Pat O’Leary (Diana Krall, James Moody, Lee Konitz) and features liner notes from legendary musician and songwriter Bob Dorough and photography by Shervin Lainez (Sara Bareilles, Rufus Wainwright, Regina Spektor). 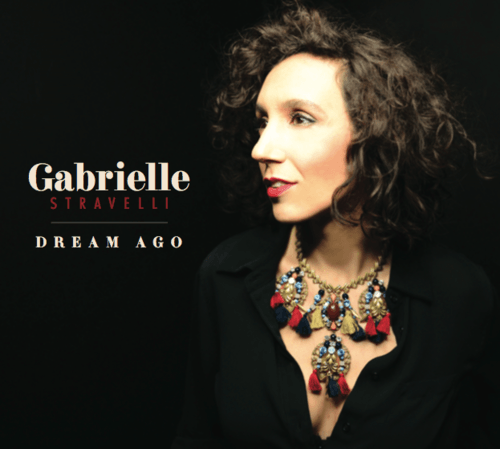 In his liner notes, Bob Dorough – who penned “Devil May Care,” “Blue Xmas,” “Nothing Like You,” “I’m Hip,” and songs from the beloved TV staple “Schoolhouse Rock” – calls the album “a pretty swinging affair. With this outing, Gabrielle Stravelli proves herself to be a quadruple threat and force to be reckoned with. With a well-trained voice, an impressive range and a controlled vibrato, she and her estimable colleagues literally run the gamut of musical styles here.”

The Grammy Award-winning vocalist Kurt Elling added “the first thing you notice is her voice. The instrument is rich and resonant, flexible and precise, soulful and clean. Gabrielle’s new compositions are professionally constructed but manage to take us to surprising places in the future. This makes Dream Ago a rare find.” Fred Hersch, nine-time Grammy Award-nominated pianist and composer, calls her “One of the top vocalists on the music scene today. She has the whole package: a fantastic instrument, great time, superb musicianship, perfect diction – and more importantly, she sings everything with a true depth of feeling. She is a gifted composer/lyricist as well. Some of these tunes may become standards some day – they are memorable, heartfelt and given terrific readings.”

Dream Ago is comprised mostly of Stravelli’s sophisticated original songs, many written with Pat O’Leary and lyricist Jason Robinson. An infectious classic 50s jazz swinger, “Cake of My Childhood” was inspired by a U.S. State Department trip to Moldova, which led to this musical memory of culinary delights.

“Prism” – perhaps Gabrielle’s most exciting vocal performance on the album – is also the perfect showcase for the bright brass tones of one of the album’s guestsScott Robinson, the NEA Fellow who performed with Ella Fitzgerald, Lionel Hampton and other jazz icons. “It was thrilling to collaborate with Scott,” she says. “Of course I admire his exceptional musicianship, but what really inspired me is his flexibility. He plays everything from traditional swing to modern free jazz and he’s comfortable in all the settings in between. He has many sounds, but always sounds like himself. Scott was very generous with his playing on this record — he played many instruments in many styles and on every track he played beautifully, with variety, commitment and heart.”

Gabrielle’s song “More” is inspired by Joni Mitchell’s eloquent and truthful songs about love, the human experience and being a woman in the music business. “I am steeped in her music,” says Gabrielle, “and this song is not only a tribute to her melancholy but was inspired by the way there’s often a chorus of Jonis in the background of her tunes – many voices stacked with her unmistakable vibrato.”

She wrote both music and lyrics to the gentle “If Only Love Was Blind” with baritone ukulele, a rarely used instrument that produces a beautiful, warm sound. This track is augmented with the ethereal tone of a glass armonica, which enhances the song’s otherworldly lyricism.

Gabrielle modeled “Didn’t You Tell Me” after a traditional jazz 32-bar American Songbook tune. Yet it turns the typical love story on its head, becoming a feminist standard with four-part harmony and devilish wordplay that take The Andrew Sisters to the next level, both deceptively chipper and gently rhythmic.

“Dream Ago,” the tender yet passionate title track, was written to cope with the sudden loss of her father almost ten years ago. “People would tell me that even though he had died that he was close to me,” she remembers, “that he could hear me or things like that, but I felt very much the opposite – that I couldn’t find a sign of him anywhere. Losing him was a surreal experience. I felt at the same time that I hadn’t seen him in forever and that he’d only been next to me a moment ago — a dream ago.” Despite the number’s emotional gravity, the exquisite piano work by album producer David Cook lets Gabrielle show off the clear and ravishing tone of her voice without clutter.

“I learned so much working with David on Dream Ago,” reflects Gabrielle. “Even with his expertise in the pop world with Taylor Swift, Jennifer Hudson and more, he brought a wealth of experience with him as a jazz musician, arranger, producer and music director. He wore so many hats while we made this record. He knew intuitively when to take the reins and when we needed a little freedom to play.”

“David literally worked magic on ‘Little Zochee,’” she continues. “The flute solo that I wrote lyrics for is actually a recording of the late sax/multi-reed player Thomas Chapin, who recorded the song with Pat O’Leary nearly 30 years ago. Tom’s playing on his solo is so incredible that we felt we really wanted to keep it, rather than having someone else recreate it. Dave took Tom’s original recording and ‘flew it in’ to our band’s version so that I could sing along with it. It’s a testament to Dave’s talent that it was so seamless.”

Cook himself responds “Gabrielle has such an interesting, innate combination of different jazz eras in her singing that it lends a timeless quality to everything she does. It’s also incredibly emotive and simultaneously sung perfectly, which is almost unfair. Pat O’Leary continues to be one of our best arrangers; as a team they are formidable and inspiring. Each song had a clear vision executed by a top-notch band, and it was a blast watching the whole thing unfold.”

Even as she makes her mark with the original compositions, the album includes two classic pop standards with bold new interpretations. Concerning Cole Porter’s“Dream Dancing,” Gabrielle says “I fell in love with the rangy melody and unabashedly sentimental lyrics. Pat O’Leary’s vocal arrangement is so dense and was a wonderful challenge to record. The ‘chorus of angels’ he created takes the tune to the most ethereal world possible and is for me, the love child of Porter and The Beach Boys – a perfect example of the way musical worlds collide in our writing process.” Even though many jazz musicians have had their take on the Rodgers & Hammerstein classic “It Might as Well Be Spring,” her rhythmically-complex arrangement – inspired by guitarist Gene Bertoncini – brings surprising new elements.

“Where Is the Song?” was written by Bob Dorough as an option for Diana Krall, who ended up recording his song “Devil May Care” instead. Gabrielle, who added a special set of lyrics for herself, is the first artist besides Bob himself to record it. The yearning love song asks “Where is the melody, the long and lilting line of rhapsody?” The vocalist responds with yet another supple vocal performance and knowing interpretation further establishing she is on the way to claiming a place among the great singers of her generation.