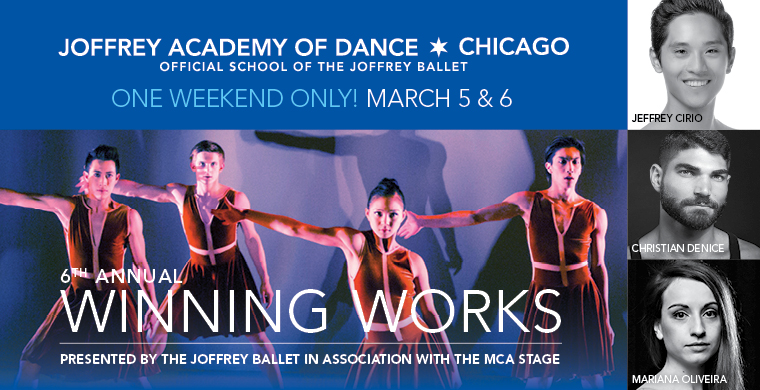 The Joffrey Academy of Dance, Chicago, has teamed together with The Museum of Contemporary Art, Chicago to present for four one act world premieres in their sixth annual “Winning Works” competition. The annual performance event was held at the Museum of Contemporary Art 5 and 6 at the MCA’s Edlis Neeson Theatre. The 2016 Competition winners are Jeffrey Cirio, Christian Denice and Mariana Oliveira. Each choreographed a work along with a fourth by Joffrey Academy Artistic Director Alexei Kremnev entitles Coco + Igor. All four of the works are performed by dancers from the Joffrey Studio Company and the Joffrey Academy Trainee Program. I stayed later for the choreographers discussion and hear them all espouse on the importance of “story telling” in their ballets; I didn’t see any. There is a reason that modern one-act ballets are choreographed, performed and relegated to history; they do not tell an audience a story.

Jeffrey Cirio is currently soloist with American Ballet Theatre and past Principal Dancer for the Boston Ballet and has won numerous ballet competitions worldwide including the gold medal at the Helsinki International Ballet Competition and the coveted Princess Grace Award. For the Boston Ballet, Mr. Cirio has created two works for the Boston Ballet: of Trial and fremd. Cirio and his sister, Lia, also a ballet dancer, lead The Cirio Collective, a summer project bringing together dancers and choreographers to work and perform in a residency environment.

His piece, Chapter 1, Chapter 6 was described as “an exploration of movement that became a reflection on a life story.” The preceding video, with his own words, explained that when reading a book and shortly after beginning you find yourself in chapter 6. OK! Aside from making his dancers look utterly ugly (black ankle socks ruined the lines of their legs) I had to ask myself if this choreographer had a grudge against dancers making their movements jerky, unpleasant to watch and all put to such beautiful music by Kiasmos. The unisex wardrobe of diaphanous shirts plus the tableaux made me think of Mother Courage’s children.

Christian Denice formerly danced with River North Dance Chicago and has won many international dance awards and citations. His piece, Urgence, was inspired by the drought in home town of Southern California as well as the recent terrorist attacks in Paris.

This piece was comprised of movement for movement’s sake and there was so much going on all at the same time that I had no idea of just what the young choreographer was trying to say. This “Winning Work” signified nothing and lacked all intuition in choreography however the lighting by Jason Brown and costume design by Gabriel Brandon-Hanson saved it….somewhat.

Mariana Oliveira was the third winning choreographer. Oliveira is Choreographer and Artistic Director of the Union Project Dance Company and has created works in New York, Miami, Los Angeles and Brazil (from whence she hails) and with venues including Lincoln Center, Tribeca Performing Arts, McCallum Theatre and most recently the venerable Jacob’s Pillow Dance Festivals Inside/Out Series.

Her work, Death and the Maiden was seen last night. Based on a poem by German Matthias Claudius, it describes a conversation between both characters where Death takes form and lures the Maiden. It is tragic and sensitive and portrays the agony and comfort of death and the awareness of life. Her patterns for both the male and female corps were outstanding and together with the sprightly music by Franz Schubert’s String Quartet No. 14, I often times found myself ready for a Balanchine one act ballet; but no luck. There were some snippets of beautifully thought out and executed pas and adagio work hence my referral to Balanchine. There were glimpses of brilliance and this lady shows signs of a future. The men’s costumes for Death were disappointing in their black dresses. Lighting by Jason Brown was exemplary.

Joffrey Academy Artistic Director Alexei Kremnev added his piece, Coco + Igor. Mr. Kremnev is founding Artistic Director of the Joffrey Academy of Dance and the Joffrey Studio Company, and has brought a worldwide reputation to the Academy as one of the most innovative and fast-growing dance organizations. He began his career in Moscow at the world famous Bolshoi Ballet Academy the Russian Academy of Theatrical Art and the Moscow State Academy of Choreography. Either as a Principal Artist, Choreographer or Teacher he has worked internationally with the Moscow Festival Ballet England’s Northern Ballet Theatre, Bolshoi Ballet, Joffrey Ballet, Cincinnati Ballet, BalletMet, Tulsa Ballet, and the Russian and European Stars of the Ballet. Mr. Kremnev received superlative reviews in the New York Times, Los Angeles Times and Dance Magazine for the leading roles he danced. He is the Laureate of the Leonide Massine Award, the Nureyev International and Lifar International Ballet Competition.

The setting gave us to see a fashion house run way (there was no scenic design credited). The music by Mr. Stravinsky and Gabriel Yared recalled themes of many of Stravinsky’s best known works and the dancers formed the traditional circle for Rite of Spring. Jackson Ferreira as Stravinsky looked the part even if too tall and lacking in elevation and Chanel, I think portrayed by Yuka Iwai, possessed such oriental lyricism, delicacy and beauty floating like a water lily…so beautiful and thrilling to watch but so out of character for Coco, that hard as nails, chain smoking French business woman. The piece lacked a through-line and told no story.     In the talk-back later with the audience, Mr. Kremnev said he might make this one-act into a full story ballet. Judging from what I saw he might want to re think that statement.

The real stars of the evening were the young dancers from the Joffrey Academy Trainees and Joffrey Studio Company! The Studio Company is a scholarship program for 10 young artists at the cusp of their professional careers. How exhilarating to observe young bodies trained in dance before arthritis, age and gravity have taken their toll. Bravo dancers!