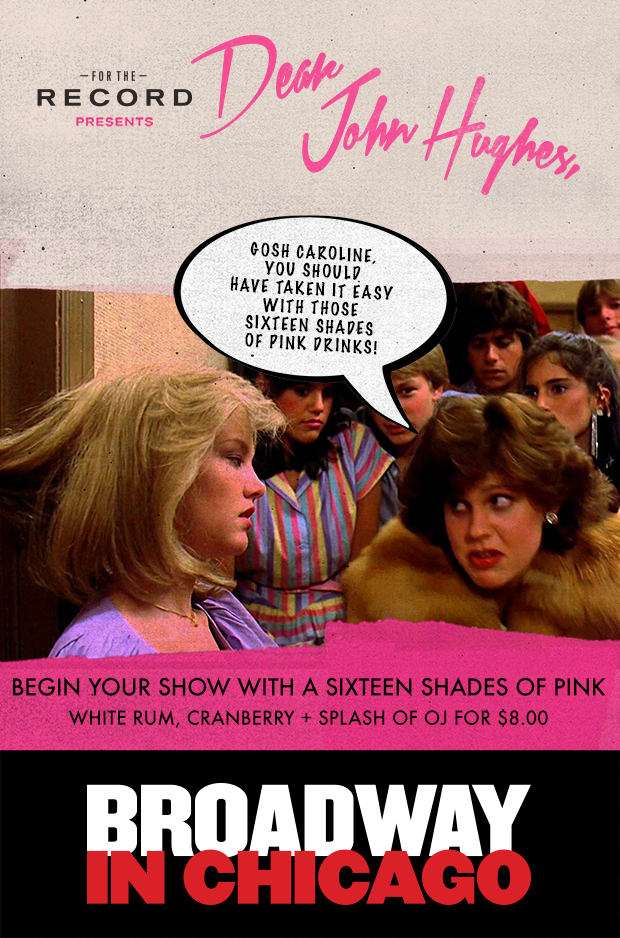 Broadway In Chicago is thrilled to announce the FOR THE RECORD: DEAR JOHN HUGHES Signature Cocktail winning name “Fat Hughesday,” submitted by contestant David Lello for Broadway In Chicago’s #FTRHUGHES “Name That Drink” contest  and selected by voting cast members in the show.  FOR THE RECORD: DEAR JOHN HUGHES is an immersive, concert event showcasing the works of beloved Chicago native John Hughes and opens tonight at the Broadway Playhouse at Water Tower Place (175 E. Chestnut) playing through March 15, 2015.

The refreshing “Fat Hughesday” reveals itself as a nostalgic pretty in pink cocktail and contains a medley of white rum with cranberry and a splash of orange juice.  The specialty cocktail will be offered at Broadway In Chicago’s Broadway Playhouse for $8.00 during performances through its Chicago engagement.

The hit Los Angeles FOR THE RECORD series breathes a new life into the movies by adapting the works and movie soundtracks of iconic directors into a theatrical concert setting. “For The Record: Dear John Hughes” includes acclaimed coming of age 1980’s teen films Sixteen Candles, The Breakfast Club, Weird Science, Pretty In Pink, Some Kind of Wonderful and Ferris Bueller’s Day Off.