Fleming Masters The Art in Lyric Opera’s THE MERRY WIDOW 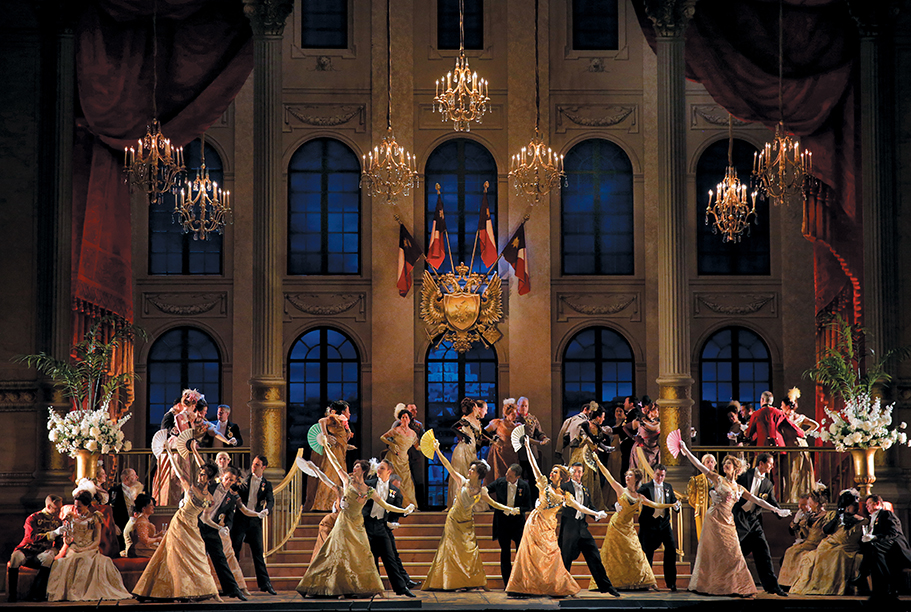 Franz Lehar’s masterpiece, composed in 1905, swept the world with its intoxicating music and poignant love story about second chances. It is the first “musical” that ignited a mania for products from hats to hairstyles. Everyone knew, sang and danced the Merry Widow Waltz. The world was ripe for love and romance and what better setting to have the action play out than the Paris of 1905, the capitol of love.

At the opening night of the Lyric’s dazzling new production of The Merry Widow they began the evening by playing the Marseilles and everyone rose to their feet in a 2 minute ovation to show our support for the unspeakable and inhuman acts that took place in Paris on November 13, 2015. The General Director stated that the action of Merry Widow was set in Belle Époque Paris of a bygone era which made me realize that the world we know and loved is also of a bygone era. I was able to escape into this beautiful world of the piece created by Director Susan Stroman and Set Designer Julian Crouch.

The action involves the beautiful Hanna Glawari, the merry widow, and her late husband who has left her a very rich woman. In fact, she’s so rich that the economy of her homeland depends on her marrying a local — so the ambassador springs into action with the help of his wife (a former cancan girl) to find Hanna the right husband. But it’s a tricky affair because the wily widow already has someone in mind: Count Danilo, an old flame, who has no intention of giving up bachelorhood. He’s got a bevy of beauties delighted to keep him happy with no strings attached.  Rendezvous are rampant. Complications abound. Hanna ultimately gets her man and love wins.

I have seen many productions of this classic operetta; a few good, many bad. For what makes this story play is the result of chemistry in casting combined with light, beautiful voices (which the Lyric nails with the second however makes some missteps with the former); it is a lesson in chemistry. As the centerpiece of this production they have cast the incomparable Renee Fleming and Thomas Hampson who possess that chemistry which pours over the footlights and washes the audience in its warmth. It is clear they adore one another in such a natural way that we get swept up in the story and genuinely care about them.

On her entrance Fleming was vocally too soft and, for the whole first act, it was difficult to hear her over the orchestra. I was not sure if she was pacing her voice in order to make it through the demanding score or not but it definitely marred one of the greatest entrances in operetta. That said she gained strength as the evening progressed (playing many of her songs far downstage which was wise). What the voice lacked in strength and volume it made up far by Fleming’s outstanding technique and sheer mastery of her art; Renee Fleming is one of the greatest sopranos of the modern operatic stage with a warmth, presence and acting ability that is rare. She plays Hannah Glawari in a completely natural style which one cannot help but fall in love with.

As Count Danillo, Thomas Hampson is made for this role with all of the panache and dashing presence demanded. He also brings an eccentricity to this well-known character (based on the actual Prince Danillo) and a strong acting ability which matches his legendary vocal prowess. You can tell he feels at ease with Fleming and they are two old friends having a sparring match and relishing every moment of it. The one disappointment I had was his entrance which, like Fleming’s appeared to be weak. He gets lost on the massive staircase (the set designer should have included large doors upstage center for the two stars to enter through).

As the secondary lovers Heidi Stober’s Valencienne is spot on however the same cannot be said of tenor Michael Spyre’s Camille de Rosillon who possesses a truly great voice but is simply miscast in a role that demands a handsome and dashing French lover; I never bought into their love story. They lacked the chemistry of Fleming and Hampson therefore muting the entire secondary plot line and creating embarrassing moments when Valencienne states that “You know I cannot resist you”.

The same can be said of Patrick Carfizzi who is a strong baritone with impeccable diction (a strong point for all of the main characters in the piece) however lacking the physical size demanded of this role (a big mistake the Lyric makes is sacrificing believability over voice). Also his second act costume dwarfed him even more. I never believe he was a Baron.

A couple of standouts in the cast are Genevieve Their’s Praskovia, Paul La Rosa’s Viscount Cascada (whose great looks and style have Camille de Rosillon written all over them) and Jeff Dumas’ Njegus (a role that is usually obnoxious and forced) played with a natural ease and charm.

Jeremy Sams English translation is one of the better I have heard and he gives it some very naughty lines such as when Njegus is peering through the keyhole of the summer house looking to see who is in there and tells Danillo “I can’t see her face” and he responds “Why, where is it?”. The translation of the song “Women” also possesses some of the funniest lyrics I have heard. There are some other songs which do not fare as well with the lyrics but overall this is a highly enjoyable translation and Sams has captured the spirit of decadent Belle Epoque Paris of 1905.

Susan Stroman’s choreography is top-notch and executed beautifully by the dancers and chorus. Chris Maravich’s lighting design is magical and brings Julian Crouch’s set to vibrant life and William Ivy Long’s Belle Epoque costumes are lush and exquisite (with the exception of Fleming’s unflattering gold gown in the second act and white one in the third which washes her out and blends with her fair complexion). I also would have liked to have seen Danillo in a blue military uniform instead of red).

My biggest criticism lies with the funeral tempos of Conductor Sir Andrew Davies (which is far too consistent with his conducting) dragging down the pace, making it even more difficult for the dancers and singers and dulling the inherent spark of the entire piece. This show has many numbers which should be galloping along instead of trotting.

However what makes this Merry Widow memorable will always be the remarkable chemistry of Renee Fleming and Thomas Hampson who make us want to fall in love all over again.

The Merry Widow runs through December 3rd. Note: Renee Fleming will only be performing on specific dates. Visit the Lyric website’s Calendar of events here.