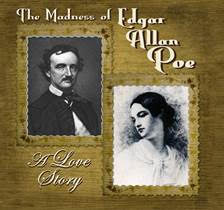 THE MADNESS OF EDGAR ALLAN POE: A LOVE STORY, an original play by Executive Director David Rice. This critically acclaimed production first premiered in 2006 and has sold out all four of its previous productions. The riveting tale of life and death, love and heartbreak runs September 26 through November 1, with previews September 23 through September 25. THE MADNESS OF EDGAR ALLAN POE: A LOVE STORY is directed by Jeff Award-nominee Alison C. Vesely (The Winter’s Tale, The Rainmaker, Underneath the Lintel, Jeeves Takes a Bow, and The Merchant of Venice at First Folio) and stars Christian Gray as “Edgar Allan Poe” (The Merry Wives of Windsor, Rough Crossing, Jeeves Takes A Bow at First Folio Theatre, A Christmas Carol at Drury Lane Theatre, and Richard II at Writers’ Theatre). This original work by David Rice, who received a Jeff Award nomination for New Adaptation in 2007, is based on the life and writings of the famed author. Poe’s macabre and melancholic tales and poems come to life in this mesmerizing play, called “A smart and heartfelt journey!” by The Chicago Tribune, “A masterful take on a master’s work!” by The Daily Herald, and “A perfect storm of theater!” by Chicago Stage Review.

During the course of THE MADNESS OF EDGAR ALLAN POE: A LOVE STORY, Poe and his wife Virginia guide the audience from room to room through historic Mayslake Hall, taking them from the garrets to the dungeons and deep into the madness of Edgar Allan Poe. David Rice’s artfully structured journey into the life and literature of the great American horror writer focuses with sorrowful clarity on Poe’s overwhelming obsession with his wife, Virginia, who died of tuberculosis at age 24. Poe married her when she was 13 and he was 27.

THE MADNESS OF EDGAR ALLAN POE: A LOVE STORY also stars Heather Chrisler as “Virginia Poe” (All’s Well That Ends Well at Theatre Wit), Kevin McKillip as “The Madman” and “The Prisoner” (The Winter’s Tale at First Folio Theatre) and Andrew Behling as “The Policeman” (Laughter on the 23rd Floor at First Folio Theatre).

Scenic Designer Angela Weber Miller transforms the Mayslake Hall into Poe’s dark and eerie mansion.  Elegant period costumes are by Rachel Lambert and props by Cassy Schillo. Sound Design is by Christopher Kriz and Lighting Design is by Michael McNamara, both of whom received Jeff Awards for their work on First Folio’s production of The Turn of the Screw.

THE MADNESS OF EDGAR ALLAN POE: A LOVE STORY runs September 26 through November 1 with previews September 23, 24 and 25. Tickets range from $25 to $39. Preview tickets are $22. All previews are at 8:00 p.m. The regular performance schedule is as follows: Wednesdays, Fridays and Saturdays at 8:00 p.m. and Thursdays and Sundays at 3:00 p.m. Additional performances have been added on Saturday, October 17 and Saturday, October 31st at 4:00 p.m. Season subscriptions and individual tickets may be purchased by calling the box office at 630-986-8067 or online at www.firstfolio.org.