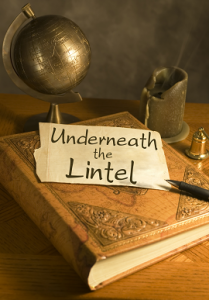 Folio Theatre (Mayslake Peabody Estate, 31st St. & Rt. 83) presents the acclaimed play UNDERNEATH THE LINTEL, directed by Jeff Award nominee Alison C. Vesely, previewing March 27, opening March 30 and running through April 28, 2013. The production stars Kristine Thatcher, a member of the 2001 Tony Award-winning Victory Gardens Playwrights Ensemble, where her play Voice of Good Hope premiered and was nominated for the Joseph Jefferson Award for Best New Work in 2000. Thatcher most recently appeared as Terri in Jeffrey Sweet’s new play Immoral Imperatives. Prior to that, she appeared in First Folio Theatre’s production of Macbeth. Other credits include “Hannah Jarvis” in Tom Stoppard’s Arcadia at the Goodman Theatre, “Candida” in George Bernard Shaw’s Candida at Writers’ Theatre, and “Regan” in King Lear and “Kate” in Taming of the Shrew at Chicago Shakespeare Theater.

Written by Emmy Award-winner Glen Berger, who recently co-wrote the book for the musical adaptation ofSpider-Man on Broadway, UNDERNEATH THE LINTEL was named one of the Top Ten Plays of the Year by Time Out New York when it opened in 2001, and has had successful runs in Ireland, London’s West End, and Canada. The Chicago Tribune raved that UNDERNEATH THE LINTEL is “Fascinating and picaresque!” and The New York Times said “There is something innately compelling in this tale of an unlikely discoverer of a secret thread who is instinctively moved to pull it and pursue the consequent unraveling.”

The play focuses on a Dutch librarian who opens a book returned 113 years overdue and finds a ticket for a Chinese laundry in London. Her curiosity compels her to redeem the ticket for a pair of abandoned trousers, which contain another clue that leads her on an adventurous journey around the world and into surprising revelations of a long-forgotten past, where she ultimately discovers what can only be described as a miracle.

First Folio Theatre is entering its 16th season of bringing high-quality performances of Shakespeare and other classics to the stage. During that time, the theater has expanded from an annual summer production to a year-round operation with three separate and distinct stages at the historic Mayslake Peabody Estate. The Shakespeare Book of Lists names First Folio Theatre one of the “150 Great Places to See a Shakespeare Play.” The Chicago Tribune raved that their “Shakespeare Under the Stars” summer series“offers something Navy Pier can’t…plenty of greenery, gentle breezes and the chance to stretch out on a blanket with family and friends while being transported to Shakespeare’s otherworldly romance.” All performances take place at the Mayslake Peabody Estate, located at 1717 W 31st St., off Rt. 83, in Oak Brook. First Folio is easy to get to from either the East-West Tollway (I-88) or the Stevenson Expressway (I-55). Free parking is available on the grounds.

UNDERNEATH THE LINTEL previews March 27, opens March 30 and runs through April 28, 2013.Tickets range from $26-37 and preview tickets are $22. Season subscriptions and individual tickets may be purchased by calling the box office at 630-986-8067 or online at www.firstfolio.org.