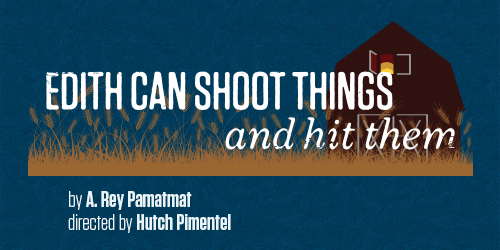 First Floor Theater (FFT) is thrilled to continue their third season with the Chicago Premiere of EDITH CAN SHOOT THINGS AND HIT THEM, playwright A. Rey Pamatmat‘s darkly comic and moving exploration of separation and the power of family. FFT Artistic Director Hutch Pimentel directs this powerful Chicago premiere, playing January 11 – January 31 at Collaboraction’s Pentagon Theatre in The Flat Iron Arts Building. Tickets for EDITH CAN SHOOT THINGS AND HIT THEM will be available at http://firstfloortheater.com/.

After their parents’ sudden departure, Filipino-Americans Edith, 12, and her brother, Kenny, 16, are left to fend for themselves in a tiny town in the middle of nowhere. With only one another to rely on, poverty and depression loom, when Kenny brings home his new “friend” Benji, and the three begin to redefine the meaning of American Family. Armed with their latchkey wit and a BB gun, the trio can take on anything, from cooking their own food to standing up for their newly-found sexuality – until their father returns and everything they’ve made threatens to fall apart. This Chicago premiere of award-winning playwright A. Rey Pamatmat‘s powerful script explores what it means to grow up poor, queer, and alone in middle America, and how the human spirit and the power of love can triumph over the darkest obstacles.

Pimentel says, “This story of young, queer people of color forging a family against the odds is both painful and powerful. In the face of abandonment and on the verge of violence, their love is fierce and transformational and has plenty to teach. In my discussions with Rey, I’ve been inspired to share the underrepresented rural queer experience in this script. I couldn’t be more excited to bring the first full production of his work, and this play especially, to Chicago.”

Title: Edith Can Shoot Things and Hit Them

Tickets: $20 general admission tickets. $10 industry tickets on the Monday performance. Tickets for EDITH CAN SHOOT THINGS AND HIT THEM will be available at http://firstfloortheater.com/. .

A. Rey Pamatmat‘s new play after all the terrible things I do had its world premiere at the Milwaukee Repertory Theater in September 2014. Mr. Pamatmat was the ’12/’13 Hodder Fellow in Playwriting and the ’11/’12 PoNY Fellow. His play Edith Can Shoot Things and Hit Them premiered at the Humana Festival, was produced nationwide, received the Steinberg/ATCA New Play Citation, and was nominated for 2013 GLAAD Media and Lambda Literary Awards. Productions: Thunder Above, Deeps Below (Second Generation), A Spare Me (Waterwell),DEVIANT (the Vortex), High/Limbo/High (HERE); publication: Samuel French, Playscripts; awards: Princess Grace Award in Playwriting and the Princess Grace Special Projects Grant, NYFA Playwriting Fellowship, E.S.T./Sloan Grant. Mr. Pamatmat is Co-Director of the Ma-Yi Writer’s Lab. BFA: NYU, MFA: Yale School of Drama.

Hutch Pimentel is the Artistic Director at First Floor Theater, where he’s worked on Twain’s World, Polaroid Stories, Sexual Perversity in Chicago, and GrimmFest. Other directing credits include Back of the Throat and 4.48 Psychosis. He’s previously assistant directed The Pride at About Face, and Bethany at The Gift. He currently works as an Artistic Assistant at Redmoon Theater. He is a graduate of Kalamazoo College.