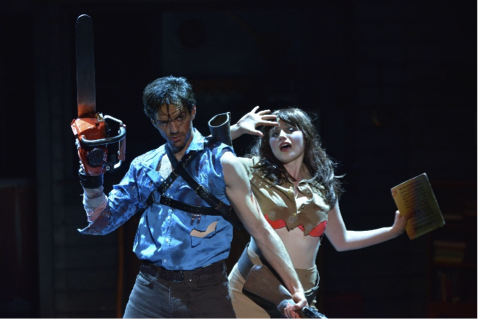 Evil Dead is one of the greatest cult movies of all time.  Sam Rami’s frightening tour de force, of gut pounding laughter has become beloved among certain sects of the world’s population. So it was with some trepidation I approached the theater last night. Could a musical adaptation capture the malevolent majesty of Sam Rami’s “almost” trilogy, (almost trilogy inferring that while there were in fact three movies, Evil Dead II (1987) was actual a remake of Evil Dead I (1981), made after Sam Rami realized just how funny #1 was and chose to envisioned the original with a more comedic tilt. The third being of course “Army of Darkness” (1992). There is your geek history lesson for the day.) The question remains could Sam Rami’s brilliance be adapted to the stage with a proper respect for the original work in such a way that the diehard fans will accept this version in their hearts. Let me answer that, by saying I am a diehard Evil Dead Fan, and I left the theater with my soul lifted to heights it has not reached, since I was young, the play was like a first kiss, a new awakening of all the reasons “Why I am.” The show lifted me; sent me back to that day when I stumbled across Evil Dead in an 80’s video store, bribing the clerk to let me rent it. To the couch where I first laughed as 1000s of gallons of Dr. Pepper came gushing out of that trap door. Had me wanting to scream to the entire water tower “you’ll be dead by dawn.” In short, Yes! “Evil Dead” the Musical is not just an adaptation, it is a succulent, juicy reminder of everything that is so right about the movies. Not an adaptation a tribute from a true fan, George Reinblatt, (Script and Lyrics).

The basic brilliance of this show is that those loyal fans who have grown with this movie, who cannot even look at a beautiful women without thinking “Give me some sugar baby,” or have been turned down by the same said women and said “Baby you got real ugly,” to her back as she walked away. Who have quoted lines like “This is My Boom Stick” or “Good, bad, I’m the guy with the gun,” right along with Star Wars and Monty Python they will love it. The brilliance lies in the fact that even someone who has never seen the movie will love it, just as much, and that is not a bad thing. They say, this is bound to be the next Rocky Horror picture show, huh? It’s a bold statement, but perhaps it is deserved. But why?

Let’s get down to the point of it. No this is not a sophisticated plot, and yes the music is simplistic. The characters on stage are indeed blank archetypes of every bad 80’s slasher flicks charters, or for that matter Scooby Doo. You got Fred or Ash, Ash is the strong leader type and while he is missing the ascot, and latter his hand, his purposefully overt machismo, and posing characterization and blocking is poster ready at all times. His lines are over emphasized to perfection by David Sajewich. Bruce Campbell the ‘B’ movie deity of chins, could not have done a finer job, had he chosen to reprise his famous roll. The rest of the cast fills all your archetypes perfectly from Annie you have your smart girl who can randomly read ancient languages, your slutty tramp in this case both are played by the darling Callie Johnson. The rest of the cast is rounded out with the rest of your typical archetypes the sleazy guy, the nerdy irrelevant, and the dorky girl who is of course fated to be the first to die, or in this case be possessed by a Canadian Demon. Rounding out the cast is the ‘lovable local’ Jake played by Andrew Di Rosa, who’s Song ‘Good Ole Reliable Jake’ is a paramount example of the Pastiche style that is shows comedic style. So over the top are the lyrics, claiming the invention of the Shamrock Shake, and pretty much any other grand thing that has ever happened in the history of man.

The show is an overblown, exaggerated orgy of the horrific; comedic brilliance truly capturing the feel of the film. Once captured it twists is around and makes mockery of its own source material. Satire yes, farce, yes, but beyond what others have attempted. To the point that I recommend peeing before seeing a man rip out his own intestines, and penis while complaining that, “death is a bitch, a Stupid bitch.” If you want high culture this play is not for you. If you want to laugh in the face of our own mortality watch zombies dance while singing about how great it is to be evil, a mounted moose head signing recruitment propaganda for the legions of hell, then get in a seat; feel the love. . This is the amazing entertainment that is cheese, it is guda, it is feta, it is gorgonzola and it is laughter that will have you gasping for breath. Cheese, indeed, and yes there are problems with the staging, for instance an entire pile of dead bodies vanishes from a scene during intermission, but the cast is very helpful breaking the fourth wall to point out all their mistakes so that the audience is sure to see that, yes there is an error right there see it, See it, yeah? Good pretty cheesy right. Look see I’m a decapitated body wondering around on stage, I’m supposed to be a dead girl but am actually a guy wearing the girls costume, see how much taller I am … no? Well, let me lift my shirt and show you my hairy chest, get it now! No? Well then let me play with my nipples a bit. Oh good, now your laughing, and that’s what we are here for, glad you came. Enjoy!!! Anyone who expected a profound theatrical experience when approaching this show, was …. Cute, yes that’s it, they are cute. This is a cheese fest! You must take it for what it is, else you’ll be disappointed. The cast and crew are fully aware of this and let the audience in on the joke with a nod and a wink. While poking fun at the cheesy effects, and square jawed over macho mise-en scene.

The effects are cheese, the music is simplistically arranged, brilliantly so. The choreography pokes fun at itself. Everything in this show pokes fun at itself to uproarious laughter. The dialogue is profound in its mockery of every possible subject that can be squeezed in, including the director of the original film. The lyrics will have you screaming with laugher. Honestly I want to go again, there is so much here that I could not possibly caught every joke.

I suggest you go whether your a fan of the films or not. If you miss it, well you will have missed a chance to stare our mortality, or religion, our relationships, and our 80’s childhoods in the face and laugh until your face turns blue from lack of breath, even then you will still keep laughing. So get out and see it!

A word of caution if you are in the splatter zone, as I was, they are not joking, you are going to be walking home covered in fake blood. And it is awesome! I recommend you do what I did, go to goodwill by a nice outfit for $10, that way if it gets damaged. It’s not a huge deal. It is part of the fun of the show. I actually smirked when I read it advertised that you would get soaked by fake blood. Thinking to myself sure, nice publicity stunt. No. You will get soaked by fake blood! Happy Halloween Chicago.

Okay have all the uninitiated virgins decided to go? Have they stopped reading? I am looking for only those who love the movies to read this part. I know, you are thinking I don’t want to go it’s going to ruin the movie. It won’t, in fact after seeing the show, all I wanted to do was run out and grab my copy of the flick, and rewatch it, over and over again. Not only is the show great for those virgins, (who have stopped reading right?) but it also nods to us and says, we love the movies too. It makes mockery Rami’s Spiderman. They read Bruce Campbell’s book “If Chin Could Kill” on stage. They toss in our favorite lines from Army of Darkness seamlessly. They even make a Doctor Pepper joke. This is a show made to honor the movies, nothing else, and it does such a fantastic job of it. Sure Newbies can view and enjoy the fantastic production before them and god bless those poor virgins. There are times though you will notice that only half the theater is laughing. Those moments were put there for us, by those who love the material as much as you. Bask in them. Now go, get your tickets, or “I swear the next one of you primitives even …..” Well you know the rest.

Evil Dead – The Musical plays at the Broadway Playhouse at Water Tower Place (175 E Chestnut) for a limited three-week engagement through Oct. 12, 2014. Tickets are available now for groups of 10 or more by calling Broadway In Chicago Group Sales at (312) 977-1710.  Tickets are available at all Broadway In Chicago Box Offices (24 W. Randolph St., 151 W. Randolph St., 18 W. Monroe St. and 175 E. Chestnut), the Broadway InChicago Ticket Line at (800) 775-2000, all Ticketmaster retail locations and online at www.BroadwayInChicago.com.