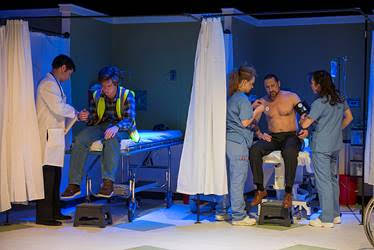 The Jedlicka Performing Arts Center (JPAC), located on the campus of Morton College in Cicero, presents one of the most successful original plays to come out of the Chicago theatre scene. E/R (Emergency Room) was a surprising smash hit for the Organic Theater Company back in the ‘80’s.  Originally directed by Stuart Gordon, (who went on to become a popular cult horror film director in Hollywood), the production was conceived by an actual emergency room doctor, Ronald Berman, M.D. and written by several members of the Organic Theater Company. The show, which follows the staff of a Chicago Hospital’s Emergency Room during one particularly crazy evening as a “parade of humanity” passes through its doors, is full of non-stop action, hilarity and drama that all make for one memorable evening of theater.

The show’s concept was developed after Gordon talked his friend Dr. Berman into taping his outrageous (and entertaining) stories of working in the ER and then shared these stories with the ensemble members of his Organic Theater Company. The actors went on to do research of their own, spending time in emergency rooms around Chicago, writing and ad-libbing scenes until they had a full-length show. The production caught on immediately, thanks mostly to the positive word of mouth generated by real doctors and nurses who were invited to check out the show in its opening weeks. It went on to have a hugely successful run in Chicago, spawned hit productions in New York and Los Angeles and was the inspiration for a prime-time sit-com starring Elliott Gould, Mary McDonnell and Conchata Ferrell.

JPAC’s Artistic Director, Dante Orfei has always been interested in successful shows from the past that are rarely revived. “I find this play as timely as ever even though it was first produced over 30 years ago,” says Orfei. “It’s a smart, entertaining show that should be introduced to a contemporary audience.”

“What really struck me about the show is that is a true ‘ensemble’ piece; there are no stars,” says JPAC Managing Director, Steve Calzaretta, who also directs the show. “There are over a dozen actors in the show. Some have one larger role and many play several smaller roles, but all are pivotal to the plot and all have their moment to shine.”

The show was originally produced by the Organic Theater Company of Chicago in 1982. It was conceived by Ronald L. Berman, M.D. and written by Dr. Berman along with Organic Theater members, Zaid Farid, Richard Fire, Stuart Gordon, Gary Houston, Carolyn Purdy-Gordon, Tom Towles and Bruce A. Young.

(on the campus of Morton College)

The Jedlicka Performing Arts Center is a professional, non-equity Theater located on the campus of Morton College in Cicero, Ill. JPAC produces 6 shows a season and is now in its 33nd year. To date, the acclaimed JPAC Theatre has presented more than 150 productions to an estimated quarter of a million people. JPAC’s national reputation grew over the years due to its mounting of rarely produced shows and Chicago-area premieres that caught the attention of producers from London to Broadway. In 1990, Academy Award winner, Joseph Brooks launched the North American Premiere of his West End musical Metropolis at the JPAC. A number of other Broadway and West End musicals have since had their Chicago debut at the theater including: The Baker’s Wife, Blood Brothers, The Who’s Tommy, Jekyll & Hyde, Aspects of Love, We Will Rock You, Phantom of the Opera and most recently, Big Fish. World Premiere productions include Nefertiti – The Musical, Danger Will Robinson! and the Liberace musical, Mr. Showbiz. JPAC has made a similar commitment to non-musical plays. Several successful, acclaimed playwrights have made Chicago-area debuts of their work on the JPAC stage including Ray Cooney, Rupert Holmes, Neil Simon, Steven Dietz and Matthew Barber. JPAC’s mission is to present vibrant theatre at an affordable price. More information at www.jpactheater.com.