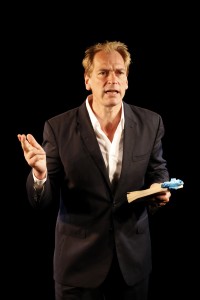 Steppenwolf Theatre Company ensemble member Austin Pendleton directs The Birthday Party by Harold Pinterin the Upstairs Theatre, at the helm of a Pinter play for the first time. The theater has been newly reconfigured by Pendleton with scenic designer Walt Spangler to bring the audience closer to the story by moving the stage to the center of the room. The Birthday Party begins previews January 24 (Opening night is February 3, 2013;  and runs through April 28 in Steppenwolf’s Upstairs Theatre (1650 N Halsted St). Tickets ($20 – $78) are on sale now.
In conjunction with The Birthday Party, Steppenwolf is proud to announce a one-night only performance of A Celebration of Harold Pinter, performed by British actor Julian Sands, directed by ensemble member John Malkovich. With personal anecdotes and reflections drawn from his work with Pinter, Sandscombines Pinter’s poems and prose to create a fresh and intimate insight into the Nobel laureate’s literary legacy. A Celebration of Harold Pinter is February 10 at 7:30pm in the Downstairs Theatre (1650 N Halsted St). Tickets ($25) are on sale now.

Actor Julian Sands, best known for the films A Room With a View and The Killing Fields, was a longtime friend of the playwright. A few years before his death, Pinter requested that Sands fill in for him at a poetry reading when he was too ill to go on. The experience ultimately inspired this production, which debuted in 2011 at the Edinburgh Fringe Festival in homage to Pinter, who died in 2008. The production toured through Britain and was presented in San Francisco, Los Angeles and to sold-out audiences in New York City, with Backstage calling it “mandatory viewing for devotees of the actor and certainly ‘the defining dramatist of the 20th century’…this one-man show fondly reveals an engaging and at times vulnerable side of the famously prickly playwright.”

“I think the extraordinary accomplishment in Pinter’s work is his mastery of language, which is so precise and so, at the same time, ambiguous and unlikely. We are constantly being asked to interpret the truth and to be aware of how language both defines and obscures the real,” comments Artistic Director Martha Lavey. “I look forward to the discussions that The Birthday Party will provoke. It is very funny, very human and theatrically gratifying.”

The Birthday Party takes place at a sleepy seaside boarding house in England, where the humdrum routine of corn flakes, newspapers and naps is interrupted by the appearance of two menacing strangers. They become guests at longtime tenant Stanley’s surprise birthday party which, after a few glasses of whiskey, party games and a mysterious blackout, turns into a deliciously impalpable nightmare. As excuses and alliances hastily shift, so does thetruthin Harold Pinter’s riveting dark-comic masterpiece.

performance (1pm for Sunday performances). Rush Tickets: rush tickets are available one hour before each show. Student Discounts: a limited number of $15 student tickets are available online using promo code “BIRTHDAY15” or “SANDS15”. Limit 2 tickets per student; must present a valid student ID for each ticket. For additional student discounts, visit steppenwolf.org/students. Group Tickets: all groups of 10 or more receive a discounted rate for any performance throughout the season. For additional information, visit steppenwolf.org/groups.

Free post-show discussionsare offered after every performance in the Subscription Season. Steppenwolf is located near all forms of public transportation and is wheelchair accessible. Street and lot parking are available. Assistive listening devices and large-print programs are available for every performance.

The Birthday Party is supported by ComEd, the Official 2012/13 Season Lighting Sponsor.