ELF THE MUSICAL Proves There is No Place Like Home 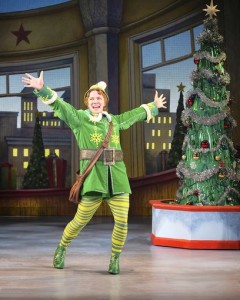 Adapting a hit film to the stage is never an easy task. It becomes even more difficult when the film is so heavily recognized with its star. Such is the case with Elf, the 2003 modern day holiday classic that features Will Ferrell as Buddy, a 6ft tall human who was raised as one of Santa’s height challenged helpers after he stowed away in a toy bag one Christmas Eve. Santa finally tells Buddy who is really is as he sets off to meet his real father (who has spent many years on the naughty list) and live life happily ever after. Of course, as any orphan story goes, things do not go as planned and Buddy becomes a fish out of water in modern day Manhattan where the gap between true believers and merchandisers are a North Pole apart.

So what happens when you don’t have the star that is associated with the initial project to rely on? Well, you have to fallback and trust the material.

The 2010 musical version contains a vibrant book by Thomas Meehan (who knows how to write an orphan musical) and Bob Martin with music by Matthew Sklar and lyrics penned by Chad Beguelin (who, in full disclosure, is a friend). Elf The Musical played limited holiday runs on Broadway for the last two years to sold out houses and even broke box office records for the theatre it occupied. Thankfully, the material is strong enough to stand on its own as a musical without its associated lead touring the country.

Will Blum as Buddy and Larry Cahn (Walter) in ELF.
AMY BOYLE PHOTOGRAPHY

For the current tour the winsome Will Blum dons the green tights and creates an instant repore the audience, adults and children alike. In fact for an audience dominated by the young, there was nary an inappropriate sound throughout the theatre for the entire show. All of the major leads in this equity tour are first rate including Julia Louise Hosack as Buddy’s step-mom, whose amazing alto voice is thrilling to listen to; Lindsay Nicole Chambers brings a Kathy Griffin quality to Buddy’s love interest Jovie.; Larry Cahn gives a well rounded portrait of a father whose priorities have gone astray; and young Noah Marlow gives a outstanding performance as Buddy’s half brother Michael.

Director Sam Scalamoni strikes a nice balance between the fantasy of the piece and the reality of a family being slowly ripped apart. Choreographer Connor Gallagher creates some clever original dances for the height challenged elf’s as well a beautiful ice skating sequence.

Elf The Musical along with Christmas Story, The Musical proves the viability of these stories in different mediums, whether told on the big screen or a proscenium stage. The message resonates now more than ever because it reminds us what is truly important, especially in this age of the have and have nots.