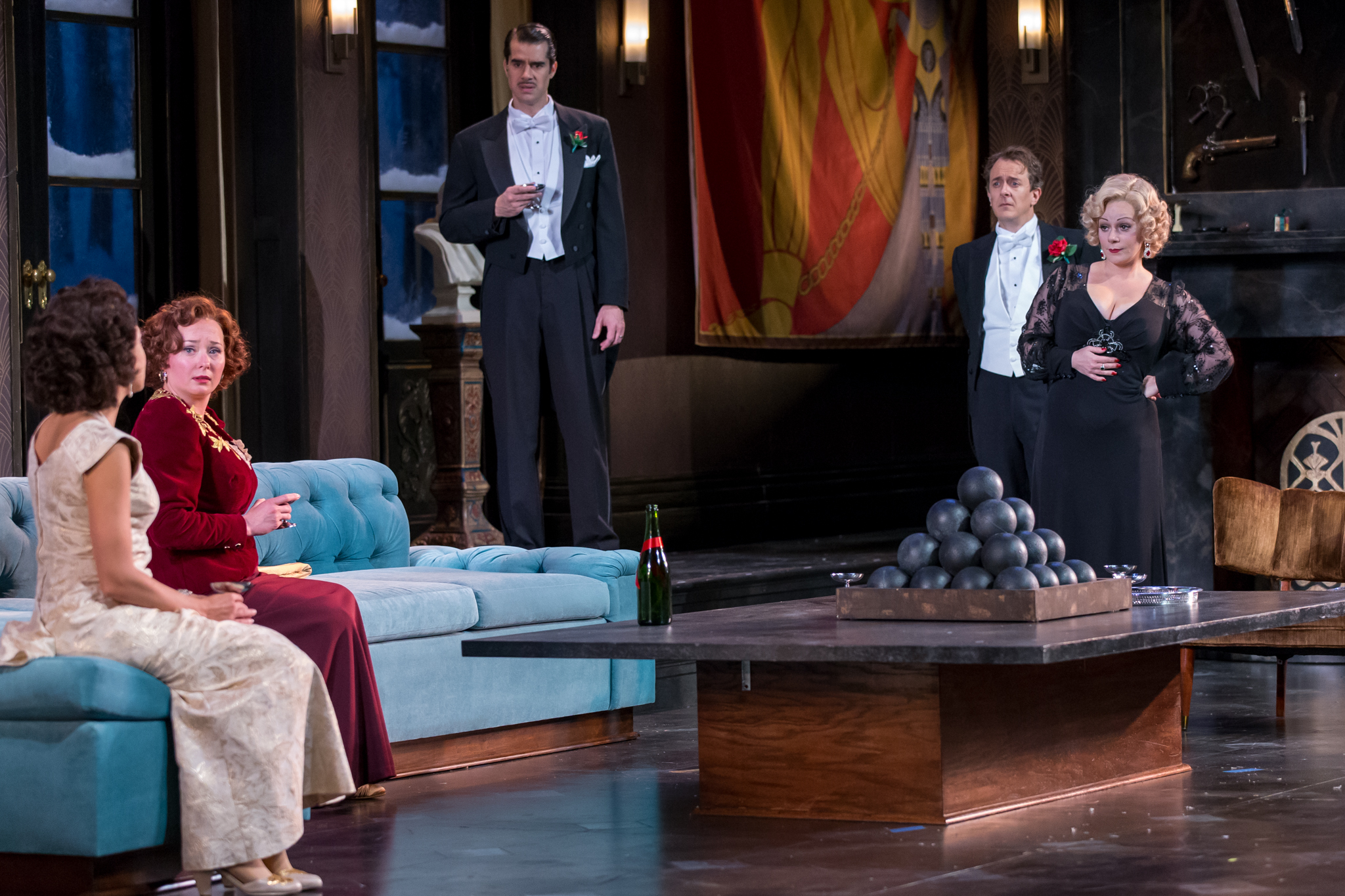 Drury Lane’ s current offering, Ken Ludwig’s 2012 Mystery Writers of Edgar Allen Poe award winning murder mystery farce The Game’s Afoot has much going for it except the script. The gorgeous art deco set by Kevin Depinet steals much of the focus and provides the perfect setting for the murder mystery to occur. It also boasts some strong performances that overcome weak character development.

The story revolves around the real life 1920s and 30s actor William Gillette who, as a struggling actor, wrote a play about Conan Doyle’s Sherlock Holmes which took off and made him famous and rich. Gillette (Derek Hasenstab) gets shot at the curtain call and closing performance of his long-running play Sherlock Holmes. Wanting to solve the crime and find the perpetrator he throws a Christmas Eve Party for his acting company at his mansion in Connecticut, equipped with all sorts of modern gadgets including a revolving bar, intercom and recording system and a collection of murder weapons.

His guests arrive and his mother, Martha Gillette (played hilariously by legendary Alene Robertson with great comic skill) greets them and makes them at home. As the evening unfolds one of the guests, theatre critic and columnist Daria Chase (played by the marvelous Angela Ingersoll in a scene stealing role) has written awful things about all of them and, at one point, slept with Felix Geisel (one of the best performances in the play by Rod Thomas) who is now married to Madge Geisel (Kathy Logelin). In the course of the evening Daria spills the beans that the stage door keeper has been found murdered.

They decide to have a séance where they will conjure up the murderer and Madge puts on an act as the voice of one of the spirits, infuriating Daria who threatens to destroy them all in the papers. Having the motive to murder one of them stabs her in the back during a power outage and the rest of the evening is spent trying to figure out who dunnit.

Having been a fan of playwright Ludwig since I saw the 1992 Chicago production of Lend Me A Tenor I was expecting the same hilarity. However, I was greatly disappointed by the story, weak character development and overall hashed up and cliché murder story. I am not sure what the show wants to be and I am not sure if the playwright is either. It is part serious drama, part Agatha Christie spoof with a sprinkling of farce and a plot of old worn out clichés. I really did not care who did it or why nor was I seldom engaged in the story or characters. In some moments it also seemed to spoof itself which was damaging to its overall credibility.

In spite of these obstacles the cast was strong with notable performances from Rob Riddle as Simon Bright, Angela Ingersoll as Daria Chase and Rod Thomas’ Felix Geisel. I cannot say if the rest of the cast had poor direction, badly written characters and dialogue or a combination of both. They are all good, solid actors but many failed to sparkle or engage me, most notably the female characters. After a weak first act I was hopeful for a strong second one but I literally dosed off as did some of the others around me. When the female British detective Inspector Goring (Wendy Robie) enters (an obvious take on Agatha Christie) I found the story sink further and any credibility until then (which was tenuous at best) dissipated. Credibility was sacrificed for shtick and laughs (of which there were several truly funny bits pulled off with finesse by the actors). If the play had focused more on the farcical elements and clever dialogue it would repair many of the problems I found with it.

The costume design by Maggie Hofmann left something to be desired in a few choices, especially Alene Robertson who was washed out and looked like a servant, instead of a Grande Dame hosting a party in a mansion. Although period appropriate they lacked certain theatricality needed for farce.

Wigs and makeup by Rick Jarvie were fantastic and gave the women an expensive, art deco style and lighting design by Greg Hofman was superb and added much to Depinet’s marvelous set.

Drury Lane has obviously selected a bit of fluff for their audiences whom they know very well. I am sure The Game’s Afoot will do well for their box office as it does not offer any lessons, morals or new ways of thinking; it is purely for amusements sake. However much of the opening night audience laughed hysterically and loud which means they enjoyed it much more than I. After all I am only a critic with a certain perspective. As Martha Gillette says when discussing why the theatre critic Daria Chase was murdered “Of course she was murdered! After all she was a theatre critic!”