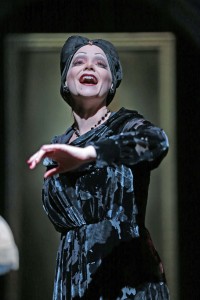 Whenever I see a theatre company with Sunset Boulevard as part of their season it always tends to make me a bit weary.   Not only is Andrew Lloyd Webber’s take on Billy Wilder’s triumphant 1950 film starring the immortal Gloria Swanson difficult from an acting standpoint, but the success of the production rests on the director knowing what makes these characters breathe and being able to communicate that to his or her actors.  Massive scenery is not necessary for a hit mounting as the Marriott proved almost a decade ago in their fantastic first regional production of Sunset Boulevard, just as long as you are true to the creator’s intention of who these people are.   Drury Lane is now having a go at this complex story and though they have some the most talented actors I’ve seen in these iconic roles, the play comes across as inauthentic.

For those that don’t know the story, Sunset Boulevard tells the sordid tale of Joe Gillis, a down on his luck studio screenwriter who stumbles upon a faded mansion on Sunset Boulevard owned by former silent movie queen Norma Desmond.  Norma enlists Gillis to edit her comeback opus “Salome”, for which she of course will star.   Their relationship grows more manipulative and dangerous, as does Norma’s balance with reality, which culminates in a tragedy that absorbs her last hope of sanity.

Unlike some of Webber’s other shows (Jesus Christ Superstar, Evita and Phantom) Sunset Boulevard, is not a sung through opera but instead is one of his few shows that is heavily scripted, pulling much of the dialogue directly from Billy Wilder’s film. (Wilder was a consultant on the musical as well).   This allows the actors to really sink their teeth into these larger than life characters.

Then there is the glorious score, which is regarded as one of Sir Andrew’s best and includes the showstoppers “With One Look”, “As If We Never Said Goodbye”, “Too Much In Love To Care” and “The Perfect Year”.

Many actresses have played the fading film star, to varying degrees of success.  What separates each of their performances as Norma is the way the actresses approach her dissent into madness.    Some are more manic (Glenn Close) while others a bit more subtle (Dianne Carroll). But from the get go, you know you are dealing with a fragile woman on the brink on sanity.

Which brings us to Drury Lane’s new production under the direction of William Osetek and starring Christine Sherrill as Norma, whose vocal talents I have been touting now for several years.  From the outset, there is a lot to like in this version of Sunset Boulevard which is an ultimately luring and regal production which features a talented cast that has never interpreted the score better, an orchestra that is on fire, and some visually stunning projection effects reminiscent of the original.

But there is a major problem with this production that cuts deep into the layers of the show.   To have an artistically successful production of Sunset, it must be a given that the lead characters are masters at manipulation.   Each has their own agenda and will use others as pawns to get what they want.   Mr. Osetek seemingly abandons this complexity of character traits and tries to simplify the relationship down to a mere love story between Norma and Joe.  In fact, in the over 25 times I have seen Sunset Boulevard, I have never seen a production where Norma and Joe fondle over each other as much as they do here.  This directorial approach is disingenuous to the truth of these characters and the result is they are now one-dimensional beings for which the actors have trouble interpreting.

At the center of this is Ms. Sherrill who, though she is about ten years too young, is a very capable Norma Desmond, and wholeheartedly gives it all she has.    The problem is that she given nothing to mold her character into.  This “star” is about as normal as they come.  There is no bigness to her Norma.   The ego is nowhere to be found.  As she enters and sings her first big aria, “With One Look”, Ms. Sherrill remains stage center and still.  No movement whatsoever which is the opposite of what that song embraces.  Same with her second act showstopper “As If We Never Said Goodbye”, where the entire meaning of the song seems lost (though never sung better) in stillness.   Even the lyrics give the actor some guidance: “Can I stop my hand from 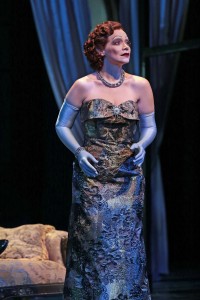 To prove the point even further, the lyrics to the first act number “The Lady’s Paying” which should allow Norma to indulge in a great little temper tantrum, has been changed to a much more mundane and gentile version.   Hence, anything that would give Norma a sense of the obtuse is diminished by the director’s vision.    Heck, even Margot Kidder’s crazy spells seem more dangerous then Norma Desmond’s.

To his credit Mr. Osetek has surrounded Ms. Sherrill with some fantastically talented actors, including the very winning Will Ray whose Joe Gillis has great chemistry with both Ms. Sherrill and Dara Cameron (Betty Schaffer).   Mr. Ray possesses an amazing tenor voice and has some very heartfelt moments with Ms. Sherrill.  Don Richard makes some interesting choices with his Max and though a bit bizarre at the outset, ends up becoming quite the unexpected anchor of this production.

The design elements also do a disservice to the opulence Sunset Boulevard demands.   Scott Davis’ set looks like it was designed to meet the needs of a production of Evita rather than the lavishness of old Hollywood.   Ms. Desmond’s mansion consists merely of a sofa, an organ and some pictures.  Oh yes, there is fabulous staircase but for some odd reason it remains unused until the final scene.  Teresa Ham pulls out all the stops and beautifully costumes the production while giving Norma some opulent costumes without going to the extreme.

All that said, this is still a very viable version of Sunset Boulevard.  Even with a very limited prism to work in, the actors turn in compelling performances with sensational vocals to boot.    More than that, to hear Ms. Sherrill sing Webber’s big numbers with that booming alto voice is definitely worth the price of admission.   Hopefully there will be more substance to the characters as the show goes forward.