It is always refreshing to see musical theater and walk out of the theater with a smile on your face and feeling good. It is especially gratifying when the entire experience is wonderful from beginning to end. All of this is true with Oak Brook’s Drury Lane Theatre production of Smokey Joe’s Cafe.

Director/ Choreographer Marcia Milgrom Dodge took this seven time Tony award nominated musical and reinvented it by locating it to a neighborhood in Chicago during the 1950’s. That neighborhood is Maxwell Street. During the 1950’s The Maxwell Street Market was a popular place where various vendors would sell their wares, and various people would gather to shop, drink, dance sing or just hang out. The production features 39 pop standards which include rock and roll and blues anthems written by Jerry Leiber and Mike Stoller. Marcia Milgrom Dodge took these songs and made them into a story on Maxwell Street. This concept is pure genius. Usually with musical theater directors build the songs around the book. However, Marcia Milgrom Dodge did the opposite; she built the story around the songs. Additionally, Smokey Joe’s is mostly all music with very little dialogue, and it works! 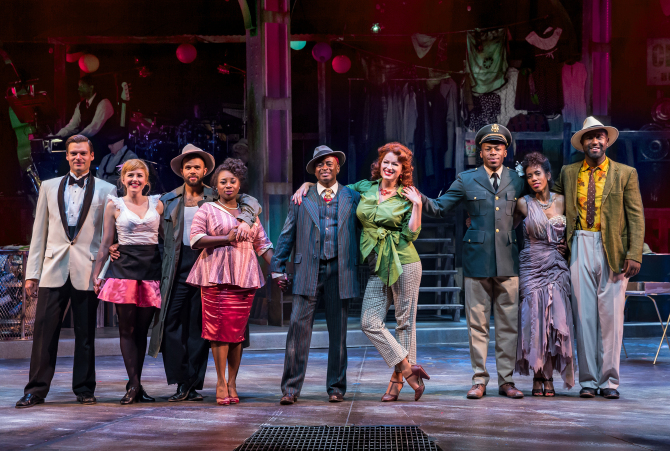 Smokey Joe’s Cafe looks at nine characters living on Maxwell Street and their characters evolve around the music they are singing with each song telling a different story. This show does not only hold the audience undivided attention, but it urges them to enthusiastic thunderous applause after most of the musical numbers.   Marcia Milgrom Dodge’s amazing direction and choreography of Smokey Joe’s creates all of the wonderful elements for a successful show.

Smokey Joe’s an ensemble show with featured performers. The entire nine member cast blend and move well to create the perfect chemistry between the cast. The entire cast is on stage for most of the production where they interact as the other singers perform. This adds to the on-going story. The very talented cast of Carrie Abernathy, Sean Blake, Justin Keyes,Donica Lynn, Meghan Murphy, Amy Orman, Tyrone Robinson, Chris Sams, and Will Skrip are perfectly outstanding.

Each of their voices are individually pleasing, and blend wonderfully with the entire ensemble. Reviewing this show is difficult because the entire cast is so talented and vocally excellent. However, it is easier to convey the individual musical numbers that literally brought the house down. Meghan Murphy delivered a folksy “Pearl’s a Singer”, a sexy “Don Juan”   sung by Carrie Abernathy, and a soulful “Spanish Harlem” sung by Chris Sams created the individual highlights for the performance. The show stopper had to be Donica Lynn singing a bible thumping gospel arrangement of “Saved” which ended the first act with non- stop cheers and applause, making the audience wanting to leap out of their seats as if they were at a Gospel Revival.

The notable group numbers I’m a Woman sung by Meghan, Carrie, Donica and Amy. The male quartet with Sean Blake, Chris Sims, Tyrone Robinson, and Justin Keyes who rocked the audience with “On Broadway complete with stunning choreography. The musical blending of these four men was perfect. I really loved their voices whether solo or together. The comic antics and excellent vocals of Justin Keyes added to their wonderful performance. Justin is really one talented guy.

Marcia Milgrom Dodge‘s choreography for Smokey Joe’s was artistically perfect complete with some Temptations moves from the guys and sexy sultry movements from the ladies.

The set design by Kevin Depinet was masterful creating Maxwell Street with a cafe, hotel with fire escape, park benches, and a parked pick-up truck. Later during Jail House Rock, a surprise appears on stage enhancing the beautiful set design. The band was also set up on stage in a park or vacant lot. Actually, this had to be one of the best sets that I have seen at the Drury Lane Theatre Oakbrook. It was really creative. Costumes designed by Sully Ratke were equally creative.

I am Highly Recommending Smokey Joes Cafe. I know that you will agree and absolutely love this fabulous production.