NEXT TO NORMAL Sets A New Benchmark For Drury Lane Theatre

To say that watching Drury Lane’s impeccable mounting of Tom Kitt and Brian Yorkey’s Next To Normal was an emotionally wrenching experience would be an understatement. It is by far, hands down and without a doubt the finest production Drury Lane has staged to date, for many reasons.

I have been touting Next To Normal since seeing my friend Anthony Rapp at a producer’s reading of the material almost 9 years ago. After going through workshops and tryouts, Next To Normal took Broadway by surprise with its unique subject matter putting mental illness front and center. With a cast lead by the incomparable Alice Ripley as Diana and buoyed by equally brilliant performance by Aaron Tveit, Next To Normal picked up on the rock-opera genre where Jesus Christ Superstar left off, and that is having subject matter that would seem deviant to the construction of what we accept as musical theatre, then break through and in the end, rip your heart in two. And not because this family embraces you as an audience member, in fact the opposite, they don't let you in; but you are invested in everything they do despite that gap. 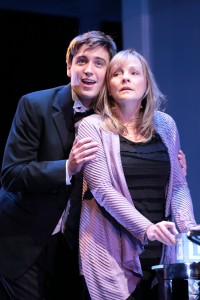 Next To Normal tells the story of the Goodman family whose matriarch Diana is unraveling with bi-polar disorder. Her husband Dan is at all times by her side as different medicines and treatments are administered to try to get her brain to some type of stability. Dan and Diana's teenage daughter Natalie is just trying to be visible in a family structure where it is clear that her older brother, Gabe, holds a special place and a dynamic which she cannot compete.

Under the masterful direction of William Osetek, this Next To Normal sets the benchmark of how musicals should be interpreted and staged. I must admit I was a bit nervous after seeing some recent productions at Drury Lane which, as from a critical point of view, felt like they were pandering to their audience demographic. Here, Mr. Osetek throws all of that out the window and stays true to the creative intent of the piece. The result is nothing other than musical theatre genius.

Mr. Osetek has given us a cast every bit as equal to the original Broadway production. Susie McMonagle will resonate to the very core of your being. Her Diana is raw and real and is vocally superior to anyone that I have seen play this role. Callie Johnson gives her Natalie depth through humor and is buoyed by having great on-stage chemistry with her would-be caller, Henry, played by the scene steeling Skyler Adams. Josh Tolle’s Gabe takes the reigns of this production almost from the get-go and doesn’t let go until the final scene, which for some will never emotionally recover. Colte Julian is perfectly cast as both Dr. Fine, Diana’s (Psycho-pharmacologist) and Dr. Madden who in the end is the most disturbing of the play’s characters.

But it this production of Next To Normal that is going to be known as Rob Thomas’ coming out party as one of our most valuable musical theatre actors. We have all seen Mr. Thomas in many different roles, for which he has always done nice work. But here (as happens with most great actors) Mr. Thomas has found the role that will raise him to leading man status. His Dan is by far the grittiest and strongest I have witnessed and he is vocally equipped to handle some very difficult riffs in the score.

Technically everything about Drury Lane’s production works seamlessly with the other. Tammy Mader’s choreography weaves in and out of Mr. Osetek’s blocking without even realizing you have just witnessed a dance scene; while the blocking and the dancing take place a pseudo, mulit-tiered Plexiglas set (designer Scott Davis) that has the ability to morph into different primary colors via Healther Gilbert’s lighting. Ray Nardelli’s sound is balanced and crisp allowing Ben Johnson’s brilliant music direction fill the auditorium like never before.

Whether the older patrons will embrace Next To Normal at Drury Lane remains to be seen; but when you have a production as pitch perfect as this, who really cares. This is a staging that must be seen. It is a work that can be life changing in many ways, especially if you or a family member have had to deal with the subject matter of this story.

Even more important, Next To Normal should be supported because it is one of the few new works that is all original. It is not based on a movie, book or prior play. It is a musical from scratch that works on every level, and its construction is flawless. That in of itself is a revelation.