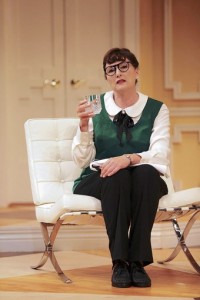 Some of you may remember many of the movies during the 1960’s that focused on travel. Many women aspired to have the fantasy job of being a Flight Stewardess for a major United States or an International airline. (Yes, stewardess, is what flight attendants were called in the 1960’s).  Men traveled for business and most always met that voluptuous stewardess for a clandestine affair.  There was also a plot where travel and long distance would get in the way of developing the dating and the relationship. Most recently, the best example of this would be last year’s television show Pan Am, where the show illustrated the glamour, the romantic trysts and the complicated life of an international stewardess during the 1960’s.   Having dated a flight attendant recently, I am very well aware of all of the complications.  Needless to say, they were much too complicated for me.

The Oakbrook Terrace Drury Lane Theater production of “Boeing Boeing” brings you back to those times and those movie memories of the 1960’s.  “Boeing Boeing” was written by French playwright Marc Camoletti and adapted by Beverly Cross. The production originally opened in London in 1962, and was premiered on Broadway in 1965.  Since then, there has been a London revival in 2007, with a successful seven-year run in the West End. “Boeing Boeing” was then adapted by Francis Evans and revived on Broadway in 2008, which earned a Tony Award.

The Drury Lane production of “Boeing Boeing” proves to live up to its timeless reputation. Set in Paris during the 1960’s, this comedy follows the story of Bernard, who is an American businessman who makes his home in Paris. Bernard has a groovy bachelor pad, a maid, and three flight attendant fiancées who he manages to juggle to satisfy his needs. Bernard seems to have everything under control with his fiancés visits by managing their flight schedules and interchanging their photos on his desk. When the various airlines decide to introduce a new turbo-charged Boeing to improve their service, Bernard’s fool proof plan becomes complicated. This change alters the stewardess’ flight schedules and Bernard’s control.  Bernard’s extremely confident, cocky attitude is altered when his excellent arrangement ends up crashing and burning.  By today’s standards the plot is very sexist. However, during the 1960’s this story line was exciting and routine. Most men strived to be Bernard.  In fact, some men may still like his lifestyle. However, I don’t know many of today’s women who would tolerate being juggled with other women, or any man’s jet-setting behavior or life style.

Bernard, (played by Steph Tovar), with the help of his reluctant housekeeper Berthe, (played by Nora Dunn), managed to control the three simultaneous relationships.  Berthe, the dutiful housekeeper is overwhelmed by all of the comings and goings at the apartment, but manages to keep everything in check and under control. Bernard’s college pal, Robert, (played by Daniel Cantor) arrives at Bernard’s groovy bachelor pad, where Bernard proudly unveils his somewhat perfect life and clever scheme to juggle his various house guests. They include; the American stewardess Gloria, (played by Kara Zediker), the Italian stewardess Gabriella, (played by Dina DiConstanzo), and the German stewardess Gretchen, (played by Katherine Keberlein).  Despite Bernard’s convenient arrangement, Bernard’s complicated life starts to unravel when his fiancés visits overlap, creating a hilarious, complicated development involving his maid Berthe and his friend Robert. This development includes a rapid change of photos every time a different woman enters the room which is quite funny.

Steph Tovar as Bernard is known for his many Chicago performances. This Jeff Award winner’s credits include: (Ragtime and Sugar at Drury Lane Theatre, , A Twist of Water at Mercury Theater Chicago, most recently South Pacific at Marriott Theatre; and the Steven Soderbergh film Contagion); Steph is an energetic actor whose performance as Bernard creates the cocky overconfident character that is transformed into the cat who ate the canary. Steph’s persona as Bernard is believable and smooth and provides the comic relief that sets the tone for “Boeing Boeing”.

Nora Dunn who stars as Berthe the maid, is known for her work on  Saturday Night Live. Dunn also co-starred with Meryl Streep in the Nancy Meyers film It’s Complicated; Nora’s TV credits also include Curb Your Enthusiasm, Entourage, Private Practice, Psych and Franklin & Bash. Nora recently starred in Nora Ephron and Delia Ephron’s play “Love, Loss and What I Wore” at the Broadway Playhouse in Chicago). Nora’s portrayal as the frustrated maid Berthe is hilarious and created the instrument which helped the play to move rapidly creating an exciting story filled with many funny moments. Much of Nora’s comedy was created by her French accent and her fabulous body language.

cause or effect essay

Jeff Award winner Daniel Cantor’s credits include: National Tour of Picasso at the Lapin Agile, Fish Men and Rabbit Hole at Goodman Theatre, and The Comedy of Errors at Chicago Shakespeare Theatre. Daniel’s character as Robert portrays Bernard’s shy, awkward friend from Wisconsin, who decides to drop in on Bernard while he is travelling through Paris. Bernard offers Robert to stay at the bachelor pad. Robert is delighted and soon gets caught up with his friend’s plan and jet-setting lifestyle.  Daniel, as Robert creates the shy, awkward Wisconsin native who transforms into an awkward swinger. As the plot unfolds, Robert gets caught up in the drama concerning the simultaneous arrival of the three stewardesses, where he manages to control the correct pictures in the picture frames as each stewardess enters the room.  This simple activity was quite funny, and Daniel made it funnier every time he changed the picture. Daniel’s interaction with the three stewardesses was priceless.  He started off as this reserved bookish fellow, and tried very hard to emulate his friend Bernard’s smooth moves. Robert’s awkward attempts at doing so was what made Daniel’s performance so wonderfully comical. He was a delight to watch and was successful in setting the pace of the performance.

The remainder of the cast included stewardesses Kara Zediker as the American “Gloria”, and Jeff Award Nominees; Dina DiCostanzo as the Italian “Gabriella”, and Katherine Keberlein as the German “Gretchen”.  All three actresses were successful in portraying the stewardesses who rush to join their beloved Bernard at the end of their trips to be with the man of their dreams.  It is difficult to single out an individual performance among these ladies because each one was superb in creating their character. I will have to say that Katherine as Gretchen stole the show with her performance as the German stewardess.

Director, Dennis Zacek mastered in moving this performance of “Boeing Boeing” effortlessly created an evenly rapid paced production seasoned with enough comic relief without going over the top.  Dennis is the former Artistic Director at Victory Gardens Theater and is recipient of the 2001 Tony Award for Outstanding Regional Theatre.

The set design of the Mod bachelor pad was created and designed by Sam Ball.  The set looks like it came out of Austin Powers and it beautifully designed. Sam’s credits include more than 100 productions at venues including the Lyric Opera, The Seattle Repertory Theatre, and The Orlando Shakespeare Festival. The Mod Chic retro costumes are created by Christine Pascual, Lighting Design is by Jesse Klug, Sound Design is by Lindsay Jones, and  Props Design is by Nick Heggestad.

Executive Producer; Kyle DeSantis, Producers Drew DeSantis, Jason Van Lente, and Abbie DeSantis, with Artistic Director William Osetek,  created another winner at Drury Lane Oak brook.  Drury Lane has had an incredible season with the productions of Xanadu, Sunset Boulevard, and Oliver. Every show has hit the ball out of the park with wonderful productions, great performances and fabulous sets. “Boeing Boeing” has continued the success of the 2012-2013 Drury Lane theater season. This winner is highly recommended!  So take an enjoyable trip and fly to see “Boeing Boeing” at the Drury Lane Theater Oak Brook. You will enjoy the trip!