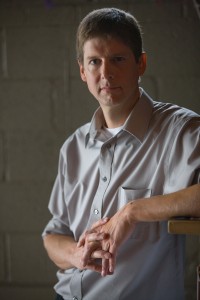 Doug Vincent’s autobiographical play,  A Day for Grace will open in Chicago on September 11th for a three-night engagement from September 11 thru 13  at Stage 773, 1225 West Belmont Avenue. Roots rock legend Sam Llanas (formerly of BoDeans) and playwright Doug Vincent share the stage in the heartwarming play of hope and triumph over adversity. Set to original music by Llanas, A Day for Grace recounts Vincent’s emotional roller-coaster journey into first-time fatherhood as he chases parental shadows and the demons of his turbulent youth in small town Virginia to find the light for his unborn child. Llanas will also open each show with an intimate solo acoustic set of old favorites, new and unreleased music. All performances are at 8:00pm. Tickets can be purchased at www.stage773.com or by calling the box office at 773.327.5252.

The play unfolds when unforeseen complications during his daughter’s birth propel Vincent’s emotions to pour out of him as he confront the haunts from his past: from little league angst and campfire stories to the dysfunctional family dynamic and the relationship with his alcoholic and suicidal father.
Lanas performs the soulful music from his 1998 solo album “A Good Day to Die,” which underscores Vincent’s 10 different character portrayals and serves as the drama’s emotional touchstones and enthralling Greek Chorus. Although he wrote the lyrics 15 years earlier and long before the play was created, nearly every song matches a scene from the play.
“It’s almost impossible to watch the show without marveling at the obvious synchronicity inherent in this collaboration. The unique interplay between the music and monologue is mesmerizing,” says director, Gary Tanin.
Both Vincent and Llanas used their creative talents as a way to heal from the tragic loss of a family member to suicide.  At their first meeting, both men were shocked to learn how serendipitously the two art forms blended together to create the compelling musical drama.  A Day for Grace touches on many contemporary social issues –- bullying, alcoholism, dysfunctional families and mental illness — all leading risk factors for suicide, according to the National Institute of Health (NIH).

“We hope that our play will continue to not only entertain, but convey its message of hope, healing, and triumph over adversity to the widest audience possible,” says Vincent.
A Day for Grace had its initial limited engagement run in 2012, where it played to sold-out audiences.  The play was first introduced to Chicago audiences last year at the Chicago Fringe Festival, while still in development.  This year, a re-tooled A Day for Grace, which begins a multi-city national tour in August, returns to Chicago before heading to New York City where it will complete its tour at Stage Left Studio, plus a producers’ showcase.
Produced by Boulder StoryHealers, a project of the Colorado Nonprofit Development Center, a nonprofit charity under Section 501(c)3, ‘A Day for Grace’ was developed at Stage Left Studio in New York City.