Documentary Language Matters Asks: What Does it Take to Save a Language? Filmmaker David Grubin & poet Bob Holman screen sections of their documentary and lead a discussion at Poetry Foundation 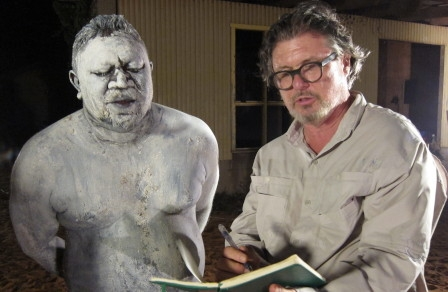 The Poetry Foundation is one in a series of locations throughout the United States that will air Language Matters, the two-hour documentary by noted filmmaker David Grubin and poet Bob Holman. Language Matters asks: What do we lose when a language dies? What does it take to save a language? Join Grubin and Holman, along with poets Peter Cook and Parsino Carlos Peynetsa for an evening of performances, film clips, and a discussion about endangered languages on Wednesday, January 28 at 7 PM at the Poetry Foundation, 61 W. Superior Street, Chicago, IL 60654. This event is free and open to the public. Language Matters will air on Chicago’s WTTW on Thursday, January 29, 9-11 PM.

There are over 6,000 languages remaining in the world. We lose one every two weeks.

“Most people know that we are losing species,” says Bob Holman, a poet widely known for his expertise in oral traditions. “Ask schoolchildren, and they’ll know about the panda or the orchid—they’ll have done a project on it. But ask someone if they know that languages all over the world are dying, maybe one in ten might.”

Language Matters was filmed around the world: on a remote island off the coast of Australia where 400 Aboriginal people speak 10 different languages, all at risk; in Wales, where Welsh, once in danger, is today making a comeback; and in Hawaii, where Hawaiians are fighting to save their native tongue.

David Grubin, whose films include LBJ, FDR, The Jewish Americans, The Secret Life of The Brain, and The Buddha, says: “Most people in the world speak more than one language—monolingualism is a recent phenomenon. We’re really celebrating diversity, looking at the vast domains of creativity, knowledge and thought encoded in language and what is lost when a language disappears.”

Language Matters includes interviews with poets, linguists, and songmen including Charlie Mangulda, the only living speaker of Amurdak, an Aboriginal language once common in Australia’s Northern Territory. The film also features original music and songs in Welsh, Hawaiian, and Aboriginal languages.

“Language is the very essence of being human,” says Holman, “and when we lose a language, we lose a part of ourselves.”

For further information check your local listings or visit languagemattersfilm.com.

Language Matters is a co-production of David Grubin Productions Inc. and Pacific Islanders in Communications. Produced in association with The Endangered Language Alliance. Major funding provided by the National Endowment for the Humanities with additional funding provided by the Corporation for Public Broadcasting, the Arthur Vining Davis Foundations, the National Endowment for the Arts, and philanthropic individuals.

About the Poetry Foundation

The Poetry Foundation, publisher of Poetry magazine, is an independent literary organization committed to a vigorous presence for poetry in our culture. It exists to discover and celebrate the best poetry and to place it before the largest possible audience. The Poetry Foundation seeks to be a leader in shaping a receptive climate for poetry by developing new audiences, creating new avenues for delivery and encouraging new kinds of poetry through innovative literary prizes and programs. For more information, please visit poetryfoundation.org.

About Poetry Magazine
Founded in Chicago by Harriet Monroe in 1912, Poetry is the oldest monthly devoted to verse in the English-speaking world. Monroe’s “Open Door” policy, set forth in Volume 1 of the magazine, remains the most succinct statement of Poetry’s mission: to print the best poetry written today, in whatever style, genre or approach. The magazine established its reputation early by publishing the first important poems of T.S. Eliot, Ezra Pound, Marianne Moore, Wallace Stevens, H.D., William Carlos Williams, Carl Sandburg and other now-classic authors. In succeeding decades it has presented—often for the first time—works by virtually every major contemporary poet.

About the Poetry Foundation Library
The Midwest’s only library dedicated exclusively to poetry, the Poetry Foundation Library invites the reading of poetry through its collections and public programs. Browse a collection of more than 30,000 volumes. Experience audio and video recordings in private listening booths. View exhibitions relating to the world of poetry. The library continues to offer its weekly Wednesday Poemtime, a storytime event for children ages two through five that introduces poetry through fun, interactive readings and crafts; and field trips that welcome group visits from students of all ages and lifelong learners. To learn more or to arrange a field trip, contact library@poetryfoundation.org.