DIRECT FROM BROADWAY, “THE BEATLES ARE BACK!” New Songs Added to RAIN’s Multi-Media Experience for 2013 Tour; Opening on October 26 for Two Performances Only at Rosemont Theatre 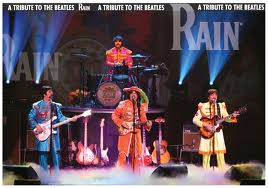 Direct from their phenomenally successful Broadway engagement, the internationally-acclaimed Beatles concert, “RAIN: A Tribute to The Beatles,” makes its debut at Rosemont Theatre (5400 N. River Rd., Rosemont) for

As “the next best thing to seeing The Beatles” (Associated Press), “RAIN” performs the full range of The Beatles’ discography live onstage, including the most complex and challenging songs that The Beatles themselves recorded in the studio but never performed for an audience. In addition, new songs are being included with the launch of the 2013 tour. Together longer than The Beatles, “RAIN” has mastered every song, gesture and nuance of the legendary foursome, delivering a totally live, note-for-note performance that’s as infectious as it is transporting. From the early hits to later classics (“I Want To Hold Your Hand,” “Hard Day’s Night,” “Sgt. Pepper’s Lonely Hearts Club Band,” “Let It Be,” “Come Together,” “Hey Jude” and more), this adoring tribute will take you back to a time when all you needed was love, and a little help from your friends!

Like The Beatles, the onstage members of “RAIN” are not only supreme musicians, but electrifying performers in their own right.

Here are some of the things that critics have said about “RAIN”:

“The audience is enraptured. They get a chance to sing along, twist and shout!”
(The New York Times)

“Just turn off your mind, relax and float downstream for a quick fix of nostalgic cheer!” (Entertainment Weekly)

“On their feet, with arms raised high above their heads, all in the audience were
swaying and singing along in blissed-out, nostalgia-powered unison!” (Chicago Sun-Times)

“The enraptured audience relives the soundtrack of its life!” (Chicago Tribune)

“‘RAIN’ creates musical nirvana…makes the hair on the back of your neck stand up!
A thrilling bit of time-warping nostalgia…Boomer Heaven!” (Fort Worth Star-Telegram)

“Uncanny! ‘RAIN’ are a quartet of fine musicians in their own right…
As The Beatles, they triumph!” (The Boston Herald)

“An adoring Valentine to The Beatles!” (The Washington Post)

“‘RAIN’ is a spectacular extravaganza… Did the audience love it?
Yeah, yeah, yeah!” (The Philadelphia Inquirer)

“RAIN” runs at Rosemont Theatre for two performances only, Saturday, October 26 at 3 and 8 p.m. Tickets are $59.50 and go on sale on Friday, April 12 at 10 a.m. after a presale beginning Friday, April 5. Tickets can be purchased online at www.rosemonttheatre.com or by calling Ticketmaster at (800) 745-3000. Tickets are also available for purchase at the Rosemont Theatre Box Office and at all Ticketmaster outlets. For groups of 10 or more, discounted tickets are available at $49.50, plus a $2.00 facility fee and a one-time processing fee of $10. For group tickets, call GroupTix at 773-327-3778.