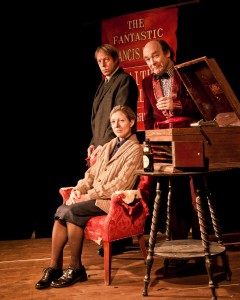 FAITH HEALER is a dramatic, mysterious and humorous work focusing on the life and times of Frank Hardy (Si Osborne), an itinerant Irish Healer.  Uniquely structured, the play is presented in four monologues. The first belongs to Frank, grappling with the mystery of his gift of faith healing. Next is Grace (Lia D. Mortensen), Frank’s patient but suffering wife, who knows too well the special magnificence of her husband. Frank’s promoter and set-up man, a Cockney named Teddy (Brad Armacost), speaks third.  His show business spin on events is both touching and comical.  Frank’s epilogue brings the play to a startling conclusion. In FAITH HEALER, Friel shows us the reality of grace, the unfolding of mystery and the healing powers of faith.

FAITH HEALER opened at TurnAround Theatre’s intimate, 75-seat home in Lakeview on March 8, 1995. An immediate hit, TurnAround’s premier production enjoyed a four-month, sold out run, closing on June 4, 1995.  Producers Cynthia Judge and Brad Armacost were then invited to bring the production to Steppenwolf Theatre’s first Studio Theatre Season as the inaugural production. FAITH HEALER re-opened on October 29, 1995 and had a highly successful run, closing on November 19, 1995. The production earned Brad Armacost a Joseph Jefferson Award and Lia D. Mortensen a Jeff Award nomination, as well as the Sarah Siddons Leading Lady Award.  Fast forward to 2010, when Judge and Mortensen appeared in Provision Theatre’s production of The Hiding Place with Den Theatre Artistic Director Ryan Martin. That meeting sparked an artistic collaboration that led to the current remount of FAITH HEALER at The Den.

“The three actors – Brad, Lia and Si – as well as myself have shared a personal and professional bond as a result of performing FAITH HEALER together 17 years ago,” comments original producer Cynthia Judge.  “Each of us has experience what Mr. Friel describes in the play, ‘for those few hours, I had become whole in myself.’  The magnificent storytelling of Friel elicited – for audience and actors – an examination of the artist’s life and evoked such questions as ‘What is Faith?,’ ‘What binds us together?’ and ‘What is the limit of human power?’  Many discussions and reflections on these ideas continued throughout the years, long after the production ended.  To answer those questions, to seek that wholeness again, and to encompass the life lessons they have experienced over these years, the actors return to their roles,” adds Judge.

Brian Friel (Playwright) was born January 9, 1929 in Northern Ireland’s County Tyrone.  He has written an array of plays and short stories and is one of the day’s foremost Irish authors. Besides Faith Healer, his plays (more than 20, all told) include Philadelphia, Here I Come! (1964), Translations (1980), Dancing at Lughnasa (1990) and Molly Sweeney (1994), as well as various translations and adaptations.  As a young man, Friel studied at St. Patrick’s College in Maynooth to become a priest, though he afterward turned from the notion of priesthood to teaching. In 1963, he spent several months as an observer at the yet-to-be-opened Guthrie Theater. With Stephen Rea, Friel co-founded the field Day Theatre Company, particularly dedicating to handling Irish matters. Friel’s many and varied awards include a place in the Irish Academy of Letters as well as an Honorary Doctorate of Literature from the National University of Ireland.

J.R. Sullivan (Original Director) currently serves as Artistic Director of New York’s Pearl Theatre Company, where his credits directing credits include Richard II, Wittenberg, Hard Times, The Playboy of the Western World, Widowers’ Houses and Twelfth Night. He was the founder of the New American Theater in Illinois and served as an associate artistic director of the Utah Shakespeare Festival from 2002 until 2009. His work has been seen in regional theaters across the country, including the Oregon Shakespeare Festival, Steppenwolf Theatre Company, Northlight Theatre the Milwaukee Repertory Theater, The Studio Theatre in Washington, D.C. and the Arden Theatre Company in Philadelphia, among others.

Bradley Armacost (Teddy) has a long association with Irish theatre in Chicago, garnering multiple Jeff nominations for his work in The Weir, Aristocrats and A Moon for the Misbegotten. He received the Joseph Jefferson Award for the role of Teddy in Brian Friel’s Faith Healer at Steppenwolf Studio/TurnAround Theatre. Other Friel projects include Wonderful Tennessee, Lovers and Dancing at Lughnasa. He appeared in Synge’s Playboy of the Western World and The Seafarer with John Mahoney, also at Steppenwolf. Other credits include A Touch of the Poet at the Goodman Theatre with Brian Dennehy, Waiting for Godot with Remy Bumppo and at Northlight Theatre (again with Mr. Mahoney) in A Life. He produced an award-winning series of one-man shows by the late Irish actor Chris O’Neil (directing Strictly Brendan, another Jeff Award winner). He is a member of Seanachai Theatre (THE Irish theatre in Chicago) and is somewhat loath to admit he isn’t Irish (Scots/French). He is a Company Member at Provision Theatre (A Christmas Carol, CS Lewis, Onstage and Shadowlands, all Jeff nominated performances). Brad has appeared numerous times at the Goodman Theatre and Chicago Shakespeare, including the Jeff Award winning Best Production, The Madness of George III.  His television credits include Missing Persons, Angel Street, The Untouchables and Early Edition. Film credits include Warren, Robert Altman’s The Company, Barbershop 2, Repetition, Eight Men Out and Backwoods. He has appeared with the Chicago Symphony Orchestra and Memphis Symphony Orchestra in the Beyond the Score presentation of Igor Stravinsky’s The Rite of Spring and with the CSO in Strauss’ Le Bourgeois Gentilhomme and as Pablo Neruda for Bedoya’s Caminos del Inka.

Lia D. Mortensen (Grace) has been an Equity actress in Chicago for the last 25 years. She most recently appeared in Northlight’s Ten Chimneys, for which she received a 2012 Jeff nomination for Best Actress.  She was honored to be a part of the 2011 Jeff Award winning ensemble of American Theater Company’s Big Meal. Other Chicago credits include The Christmas Miracle of Jonathan Toomey and Hiding Place at Provision; the Pulitzer Prize-winning Rabbit Hole at Goodman Theatre; Rivendell Theatre: Fighting Words; Northlight Theatre: Lady Windermere’s Fan, Sky Girls and Talley’s Folly; Chicago Shakespeare Theater: All’s Well That Ends Well and Measure for Measure; Steppenwolf Theatre: Closer and Faith Healer; Remy Bumppo: Night and Day (premiere production); Organic Theater: Aristocrats; Classic American Theatre: Voice of the Turtle and The Glass Menagerie (w/Celeste Holm); Next Theatre: Well, A Doll’s House, Macbeth and The Illusion; and several productions at Court Theatre. Directing Credits: Bus Stop by William Inge (co-directed with Ryan Martin) and The Quality of Life by Jane Anderson, both at The Den Theatre.  Film credits:  the remake of Nightmare on Elm Street (2010) and Blink. Television credits: The Chicago Code, Family Practice, Early Edition and Missing Persons. She has numerous commercial credits. Lia is a Company Member of Provision Theater and an ensemble member at The Den Theatre.

Si Orborne (Frank Hardy) has performed at most of Chicago’s theaters over the past 25 years, and in many regional theaters in the U.S. and in Canada. A Jeff Award-winning actor, he has also directed the award-winning Northwest Highway for The Gift Theatre, and the award-winning A Prayer For My Daughter at Mary-Arrchie Theater Co. ‘Frank’ is a role he’s relieved to return to after a hiatus of 17 years, as it’s never really left him.

The Chicago premiere of THE QUALITY OF LIFE

Red and blue state worlds collide in this compassionate and humorous drama that confronts the fundamental human challenge of losing a loved one. Jane Anderson’s hilarious, stirring play puts deep focus on two couples: one dealing with a recent loss and another under the specter of it. Struggling to keep their marriage intact after the death of their daughter, Dinah and Bill, devout church going conservatives from Ohio, visit their left-wing cousins Jeannette and Neil, who’ve just lost their home in the Berkeley Hills to a wildfire. Adding fuel to the wildfire, Neil is dying of cancer. But to their cousins’ surprise, the couple, now happily living in a yurt on their burn site, continue to celebrate life with hits of pot and a steady flow of red wine. Sympathy turns to rage, however, when deep-seeded values and uncompromising beliefs are put the ultimate test. Ethical, religious, and moral beliefs about the right to both life and death are on full display in Anderson’s gripping play.

The world premiere of CITY OF DREADFUL NIGHT

It’s hot on the heels of World War II when a small time New York hood’s paranoia reaches the breaking point. Convinced that his girlfriend Anna is hiding something from him, Gus enlists his younger brother Tony, a shell-shocked veteran, to start tailing her, unraveling a chilling tale of mystery, romance and suspense. The Den Theatre dims the lights and breaks out the popcorn for this rich and stylish throwback to the days of post-war intrigue and classic film noir.

The Chicago premiere of A FISH STORY

It’s all of the above in Jon Tuttle’s hilarious and touching outburst of home-cooked storytelling. George shoots a schnauzer and brings it triumphantly back to Zee, who proceeds to stuff his pillowcase with bloody fish parts. Surprisingly, their teenage daughter Annie longs to leave her socially impaired family behind. As the floodwaters rise outside, a stranger arrives to make this loony domestic-dramedy even more dysfunctional!

About The Den Theatre

The Den Theatre provides a creative gathering place, an actors’ and artists’ den, a comfortable and affordable home to create and explore, and home to a young storefront company that shares the name. Founder and Artistic Director Ryan Martin saw a diamond in the rough when he first walked onto the bare and empty wood-floored 2nd story of 1333 N. Milwaukee Ave. With the potential for innovative live performance in a neighborhood that has long been known for its creative heartbeat, this formerly empty space is now fully equipped with a bar and café, and boasts five unique, intimate theatre spaces on two floors, and enveloped by a never-ending field of lounge space for audiences and like-minded culture hounds to drink, talk, read, watch, think, listen and live. In addition to The Den Theatre Ensemble, Black Box Studio, with its new conservatory program, also calls The Den home, as well as Seanachi Theatre Company, who will be producing their upcoming season at The Den. Theatre and dance companies from Chicago and beyond have also called The Den home, utilizing our theatres, mirrored studio space and easily convertible cabaret space to accommodate a stream of programming, including plays, musicals, film screenings, classical and jazz performances, dance, improv and stand-up, seminars and speaking engagements

The Den Theatre is committed to producing theatre that explores our very human search for identity, companionship, and most importantly, a place to call home. Our productions reflect this shared need to find our purpose and to understand our place in the world. By way of this mission, The Den seeks to welcome artists of all disciplines to join our ensemble and our audiences in creating a welcoming atmosphere that we can all call home.